The canary in Canada's boreal forest is a woodpecker 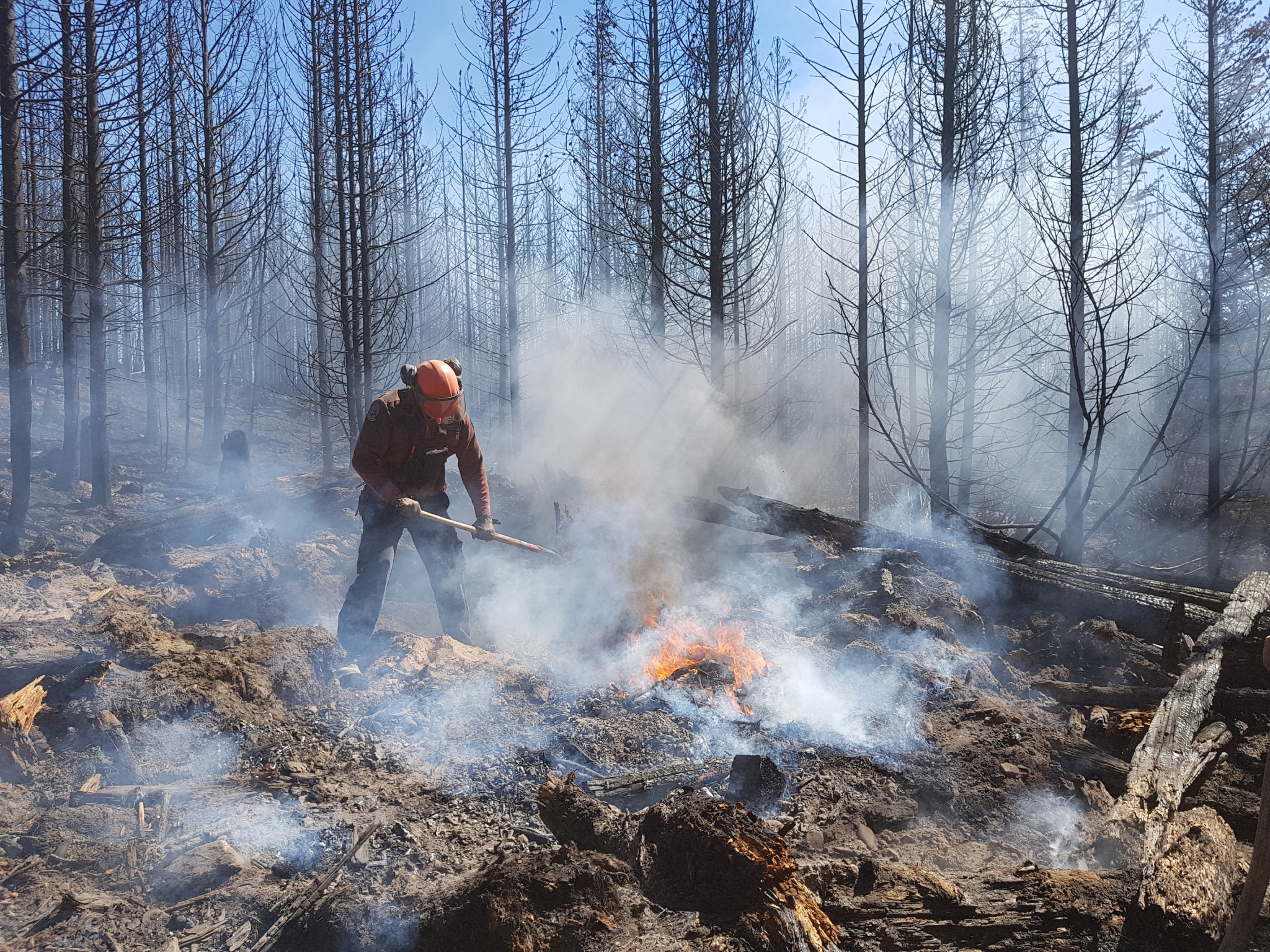 A firefighter works in Middle River, B.C. in July 2018, which was near the Sakeniche wildfire last summer. B.C. Government Photo
Previous story
Next story

Last year, six scientists in Canada made a startling discovery: rampant wildfires unleashed by climate change will help push the black-backed woodpecker population to the brink of annihilation in eastern Canada.

The woodpeckers are representative of biodiversity. As a “focal species,” scientific projections of black-backed woodpecker populations can be used to examine the impact that climate change is having more generally on Canada’s vast boreal forests.

The study, published in February 2018, found that there could be a decline of up to 92 per cent in the woodpecker population in central Quebec by the year 2100, under a “worst-case” climate change scenario. Combined with disturbances caused by logging, the outlook is particularly grim.

“In a world with severe climate change scenarios, with an increase of fire, it will be detrimental for species associated with fire, such as the black-backed woodpecker,” said Junior Tremblay, a research scientist at Environment and Climate Change Canada (ECCC) who led the team, in an interview on May 2.

The study now feels like a harbinger for the sweeping May 6 United Nations-led biodiversity report that said over a million species of plants and animals could face extinction, and that nature is in decline “at rates unprecedented in human history.”

The team that put together the study from ECCC and Natural Resources Canada reflected on their findings at an annual conference of the Centre for Forest Research, held May 1-3 at the Université du Québec à Chicoutimi.

Canadian forests and the life within them are facing a climate threat. As climate change lengthens and multiplies fire seasons, large, old-growth trees are burned up, replaced with young, smaller deciduous trees, say the scientists. That’s bad news for birds like the black-backed woodpecker, and potentially many other species.

Climate change is leading to an increase in the area of Canada’s forests that are burned each year — about 300,000 hectares more per decade since 1980, according to Yan Boulanger, a research scientist at the Canadian Forest Service who was also on Tremblay’s woodpecker research team.

Research has already shown that climate change is significantly stunting the growth of black spruce, the iconic boreal tree in Canada. They have found that large portions of the boreal forest could be at risk of dying off by the end of the century due to fire, insect infestations and drought.

Canadian scientists have found that humanity's contribution to climate change made wildfires across British Columbia in 2017 far worse. After two severe season, B.C. is preparing for another major wildfire season this summer, reports indicate.

In a recent major report on the impact of climate change, government scientists also concluded that human activity had increased the likelihood of fires like the 2016 Fort McMurray wildfire, which burned through 6,000 square kilometres led to the evacuation of over 80,000 people and shut down oilsands production.

“The projection of temperature that we’re forecasting for the end of the century is 3.5 to almost eight degrees Celsius for boreal in Quebec,” said Boulanger. More fires mean younger landscapes, and potentially less resilience and less biodiversity.

“If there’s more fire, there are less stands available for harvest. With our analysis that we have conducted, we concluded that if we are to harvest at the same rate as we are doing right now, in a climate that will change, and much more conducive for fire, it would bring us to a point where there could be some timber supply shortage,” he said.

The Centre for Forest Research bills itself as the largest forest ecology research group in Canada, combining experts from 11 Quebec universities, over 100 scientists and associate scientists and hundreds of doctoral and master’s students.

It’s an attempt to merge complementary scientific expertise to come up with strategies to fight challenges like climate change, insect outbreaks and the increase of wildfires.

The study on the black-backed woodpecker is one example of how this collaboration can work, said Tremblay, who is an expert on boreal birds.

He was able to partner with Boulanger, an expert in forest dynamics, and Martin-Hughes St-Laurent, a professor at the Université du Québec à Rimouski who is an expert on the boreal ecosystem. The study also involved scientists Dominic Cyr, Anthony Taylor and David Price.

Pierre Drapeau, co-director of the Centre for Forest Research, said forest ecosystems in the boreal forest have been adapting to wildfires over the last 7,000 years, but climate change and logging are new phenomena.

“It’s not only a matter of having less and less wood supply in the near future, but it’s a matter of how resilient these systems will be,” he said.

There is an example of what happens to biodiversity and resilience when a landscape is altered, said Nicole Fenton, a professor at the Université du Québec–Abitibi Témiscamingue.

Sweden has lost a significant amount of its old-growth forest, said Fenton, who studies how bryophytes, which are small plants like mosses and liverworts that make up peat bogs and wetlands, are distributed across the landscape.

In Canada, she said, “we are fortunate enough to still have a landscape which is— although much reduced — still dominated by mature, and/or old growth forests."

Canada’s forests are giant reservoirs of carbon, added David Paré, a research scientist of biogeochemistry at the Laurentian Forestry Centre. His research has shown that the presence of broad-leaved trees, or hardwoods, allows carbon to be captured deeper in soil.

In that sense, under some conditions, the intervention of humans in forest management can have some benefit. But it is unlikely that the forest would become a bigger carbon reservoir in the years to come, said Paré. He called that prospect “frightening.”

“We are entering, we are seeing with different science, an area where our models to predict — or tells us what we should do, how much we should harvest, are being questioned, because of these (climate) changes. So this is why the future is worrying.”

By Carl Meyer | News, Energy, Politics | January 8th 2019
Reports from the Race to a Safer World

"Canadian scientists have found that humanity's contribution to climate change made wildfires across British Columbia in 2017 far worse... In a recent major report on the impact of climate change, government scientists also concluded that human activity had increased the likelihood fires the 2016 Fort McMurray wildfire..."
Despite its own scientists research on the significant impacts of climate change in the managed forests sector in Canada (around 65% of Canada's total forest area), the federal government still denies the impacts of human activities in the increase of forest fires in Canada.
From Canada's " Second Biennial Report submission to the United Nations Framework Convention on Climate Change (UNFCCC), section 5.1 footnote: "Canada has indicated that its accounting for managed forests towards its emissions reductions target will exclude the impacts of natural disturbances because these impacts are non-anthropogenic."
As GHG emissions from "natural disturbances" (e.g. wildfires, insect infestations, drought, flooding, melting permafrost ) have become a major "source" of emissions instead of a "sink" (or removal), the federal government (and most provincial governments) has decided to pursue Harper's 2012 policy and not include emissions from "natural disturbances" in its annual report on GHG emissions in the LULUCF (Land-Use, Land-Use Change and Forestry) sector.
In 2015, total net emissions of carbon dioxide equivalent (CO2e) from Canada's managed forests (about 226 million hectares) were about 221 million tonnes (Mt).
The managed forest is made up of all forests under direct human influence. Its a subset of Canada's total forest area and includes forests managed for harvesting, forests subject to fire or insect management, and protected forests such as those found in national and provincial parks.
As a party to the UNFCCC, Canada must report annually on greenhouse gas (GHG) emissions from the managed forest.
(source: Natural Resources Canada, 28/09/2017, Indicator: Forest carbon emissions and removals)
In 2015, Canada's total GHG emissions were estimated at 722 Mt CO2 e, excluding GHG emissions from "natural disturbances".