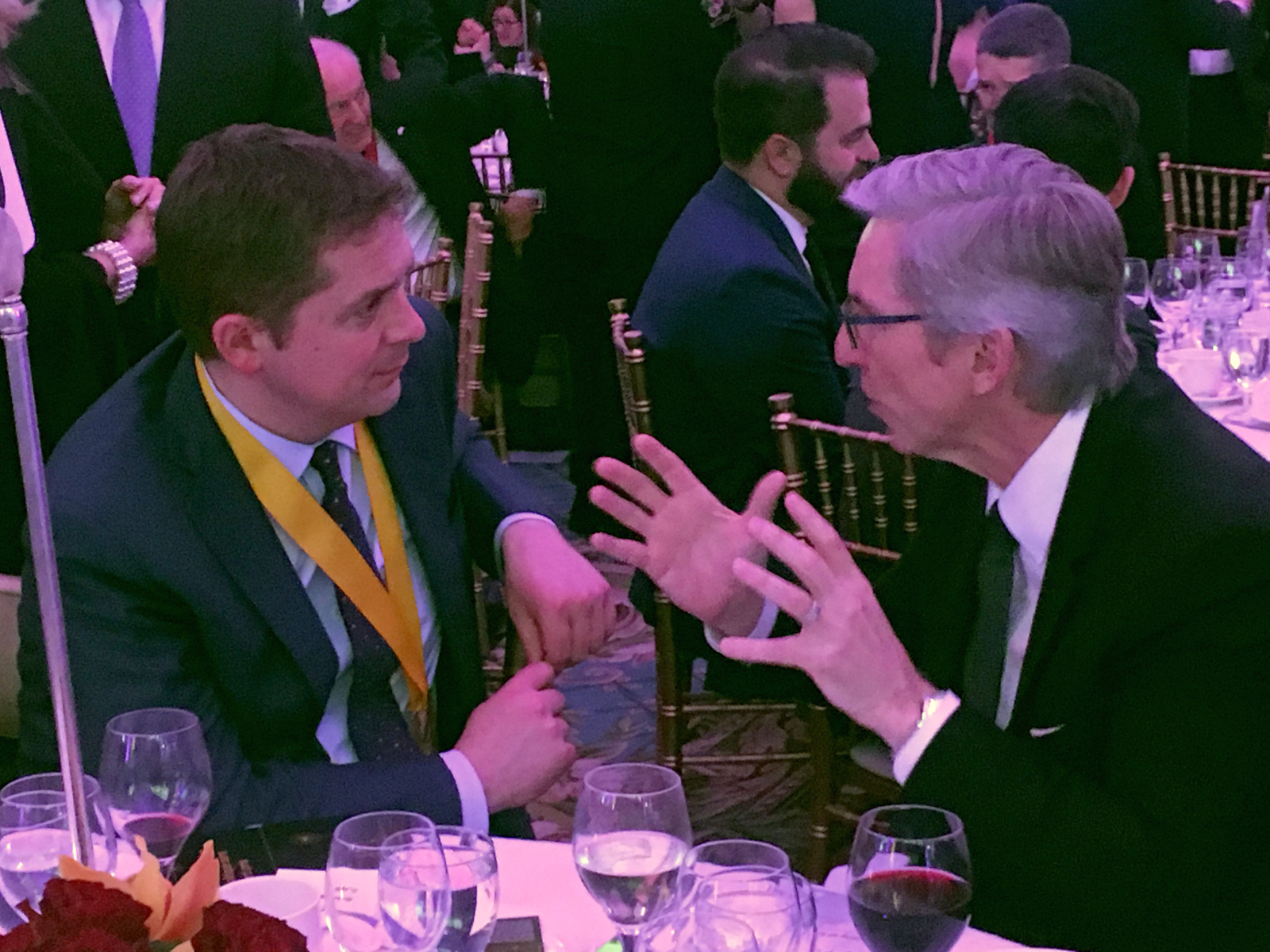 Conservative Leader Andrew Scheer speaks with Imperial Oil CEO Rich Kruger at the Politics and the Pen dinner in Ottawa on May 15, 2019. Photo by National Observer
Previous story

Official Opposition Leader Andrew Scheer talked energy policy with the boss of Imperial Oil over roasted caribou and merlot during a posh literary gala in Ottawa last week, after the two found themselves side-by-side thanks to a change in seating arrangements.

The Conservative Party leader said he didn’t know he would be seated with Rich Kruger, the CEO of one of Canada’s largest fossil fuel companies, last week at the black-tie Politics and the Pen dinner, an event which was heavily sponsored by Kruger's company Imperial Oil.

U.S. energy giant ExxonMobil is the majority shareholder of Imperial, controlling more than two thirds of the shares of the Canadian affiliate. Imperial Oil spent at least $50,000 to be one of only three “platinum” sponsors for the dinner, the other two being CIBC and CN.

The conversation between Scheer and Kruger at the luxury Château Laurier hotel comes less than a month after the federal opposition leader refused to apologize for participating in a day-long event with oil executives at an Alberta resort, featuring a panel called “paths to federal election victory.”

The Politics and the Pen gala is a yearly get-together of politicians, writers, diplomats, celebrities and others in support of Canadian political writing. The event raises money for the Writers' Trust of Canada, a registered charity.

Politicians are invited to be present at every table for the dinner, which raised $385,000 this year. The Writers' Trust says the May 15 event, which drew 500 people according to Ottawa Business Journal, was cleared by the ethics commissioner, and that it tries to ensure politicians sit at tables “where there is no real or perceived conflict.”

The issue of fundraising events featuring politicians has become a controversial issue in Ottawa in recent years, due to concerns that companies can use them to pay cash to get access to discussions about important public policy decisions.

Together we raised $385,000 for Canadian writers at #polipen! Thanks to our event guests, committee, sponsors, and everyone who made the night a huge success. And congrats to #ShaughnessyCohen Prize winner @RachelaGiese!
View the photos: https://t.co/WkBuyBKqSd #canlit #cdnpoli pic.twitter.com/6aRfrI3WfY

These controversies likely prompted some changes to Lobbying Commissioner Nancy Bélanger's guidelines for lobbyists to avoid placing themselves in a conflict of interest, democracy and transparency activist Duff Conacher has argued.

Scheer was transferred to the table with Kruger “less than 48 hours before the event” and due to a “last minute cancellation,” confirmed Megan Leahy, public relations consultant for Writers’ Trust. The Conservative leader replaced a “minister” originally assigned to the table, she said.

Kruger is the responsible officer listed in the federal lobbying registration for Imperial Oil — a company that has directly lobbied Scheer on energy.

The oil company was also listed as the sponsor of the lavish dinner overseen by the hotel’s executive chef, Louis Simard. Kruger also appeared in an opening video that was shown to the audience, alongside company executives from the other platinum sponsors and politicians.

The three platinum sponsors ran advertisements in the gala program toasting the finalists for the $25,000 Shaughnessy Cohen Prize for Political Writing, awarded this year to Toronto-based author Rachel Giese for her book Boys: What It Means to Become a Man.

Scheer was invited as a guest of Writers’ Trust, Leahy wrote in an emailed response to questions. Scheer’s wife, Jill Scheer, is on the gala committee. His impromptu rendezvous with Kruger led to an extensive conversation throughout the evening, Scheer told National Observer.

“As a matter of practice, I follow all the rules for lobbying and accepting gifts. This was a fundraiser for a very important event, to raise money for the Writers’ Trust to support Canadian authors.”

The event was also sponsored by Shaw, which produced the videos, as well as 36 other major Canadian and multinational sponsors in the gold, silver and bronze categories, including Quebec engineering firm SNC-Lavalin which was a bronze sponsor.

Leahy said all event sponsors are given a note in advance of the gala that reviews issues related to conflicts of interest and lobbying. She said the note is “approved annually” by the ethics commissioner.

The note reads that Writers’ Trust and the gala committee “have reaffirmed to the Conflict of Interest and Ethics Commissioner and the Lobbying Commissioner that we will, as always, do our utmost to ensure that politicians are placed at tables where there is no real or perceived conflict.”

“As Politics and the Pen is arranged in advance, lobbyists who discuss registrable subject matters with designated public office holders in attendance must report those oral communications by the 15th of the month following the event, as required by the Lobbying Act.”

Asked on May 16 about Scheer’s conversation with Kruger, Imperial Oil public affairs advisor Jon Harding said he couldn’t speak to the conversation. “As you may know, Imperial was a sponsor of the event last night. My understanding is that parliamentarians were seated at many of the tables,” he emailed.

Harding did not respond to followup questions about whether any part of Kruger’s conversation with Scheer would be reported in the lobbying registry.

Honoured to be at Politics & The Pen put on by @writerstrust. An amazing suite of writers & solid comedic performances by @karinagould & @ErinOTooleMP. We could use a few more of these a year in #Ottawa #polipen #cdnpoli pic.twitter.com/mJqTkzfCiJ

The event was attended by numerous well-known Canadians including actor, comedian and author Mark Critch, who has a new book, Son of a Critch: A Childish Newfoundland Memoir.

Gould has called Scheer’s participation in the event with oil executives in Alberta "concerning.” Her office declined to respond to a question about Scheer's conversation with Kruger at the May 15 gala.

Gould’s spokeswoman Amy Butcher said the minister was invited by the gala committee to co-host and did not bring a guest. She was seated with the Chartered Professional Accountants of Canada (CPA), said Butcher.

For the event, the minister “sought and received clearance from the ethics commissioner," Butcher wrote in an emailed reply. Asked if she was lobbied, Butcher wrote, “she was not.”

CPA was a gold sponsor of the evening, which means it donated at least $25,000 for the event.

The minister “spent her time either hosting on stage or enjoying her meal,” she said. “She enjoyed speaking with Rachel Giese, the author of Boys, who was seated at her table (she was on stage to congratulate Ms. Giese who won the evening's top prize). She left the event once the formalities concluded.”

Editor's note: National Observer managing editor Mike De Souza was invited to the Politics and the Pen dinner as a guest of the Writers' Trust of Canada after he recorded a video that was displayed during the evening about a book by Jacques Poitras, one of the finalists. The book by Poitras, Pipe Dreams: The Fight for Canada's Energy Future, is about the cancelled Energy East pipeline project.

Re: "....we also had a conversation about the impact on government revenues when energy products cannot get to market,” the Conservative leader said Friday on Parliament Hill."

Wonder if they were discussing monetary myths or MMT?

As Warren describes it:

Fiat money is a tax credit not backed by any tangible asset. In 1971 the Nixon administration abandoned the gold standard and adopted a fiat monetary system, substantially altering what looked like the same currency. Under a fiat monetary system, money is an accepted medium of exchange only because the government requires it for tax payments. Government fiat money necessarily means that federal spending need not be based on revenue. The federal government has no more money at its disposal when the federal budget is in surplus, than when the budget is in deficit. Total federal expense is whatever the federal government chooses it to be. There is no inherent financial limit. The amount of federal spending, taxing and borrowing influence inflation, interest rates, capital formation, and other real economic phenomena, but the amount of money available to the federal government is independent of tax revenues and independent of federal debt.

Because corporations are known to play by the rules right? What a joke. It is time we fight to end the plutocracy and revamp our political system to work for the majority.