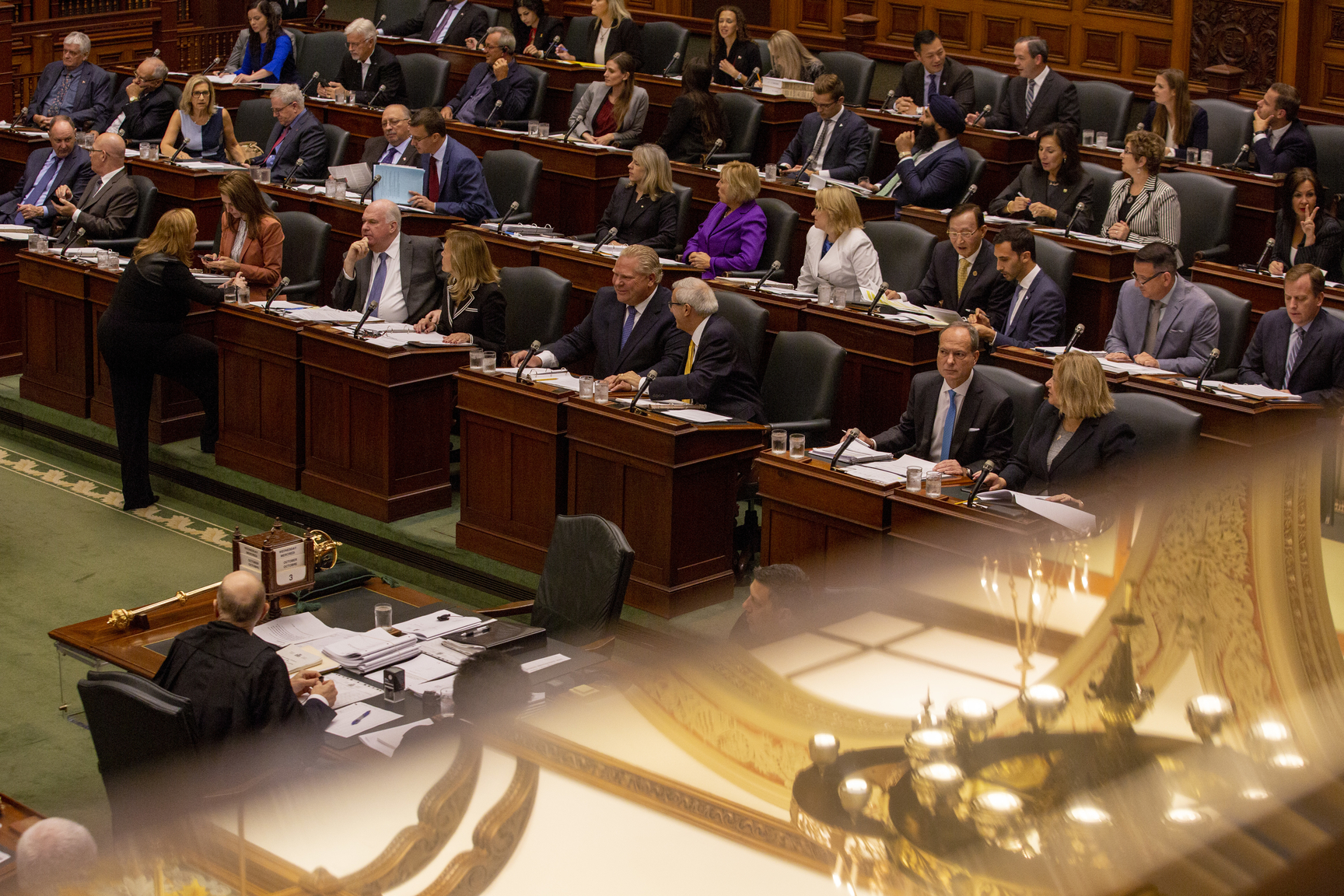 Doug Ford and the Progressive Conservative front bench at the Ontario Legislature on 3 October, 2018.
Previous story
Next story

Premier Doug Ford's Progressive Conservative government is seeking to adopt legislation, Bill 108, that would uproot Ontario's environmental and housing policies. The provincial legislature's justice committee heard from stakeholders on Friday and will vote on it clause-by-clause on Monday. It could go to a vote in the legislature by Wednesday.

Meanwhile, Prime Minister Justin Trudeau said the federal government would funnel funds directly to municipalities to help them cope with the climate crisis due to what he described as Ford's disinterest.

Mayors and city councillors from across the province have criticized the Ford government for failing to consult with them before crafting the omnibus bill. A string of cities have called on the government to spend more time considering the implications of the bill instead of rushing it through.

The government, coming up to the one-year anniversary of its election win, says the bill would increase the supply of housing and make it more affordable.

Critics, however, say the bill gives developers a free hand to avoid contributing to the broader health of the communities they build in amid weaker protections for at-risk species.

The committee heard from Toronto city councillors Gord Perks and Kristyn Wong-Tam and chief planner Gregg Lintern, ​the CEOs of the Ontario Home Builders' Association (OHBA) and the Building Industry and Land Development Association, as well as lawyers for the Canadian Environmental Law Association and others.

"By letting developers off the hook from making fair contributions to community growth, it will be people, taxpayers and wildlife who pay the ultimate costs," @OntarioGreens' leader @MikeSchreiner says of Ford government's #Bill108.

Toronto-based conservation group Environment Defence said the bill fulfills most of the demands submitted by the home builders association, rolling back protection for the environment and enabling sprawl. It brings back a provincial organization called the Ontario Municipal Board, and gives it the power to override municipal planning decisions. It also removes restrictions on urban boundary expansions, and recalibrates and caps development charges, depriving municipalities of needed funds for parks, community centres and libraries.

The bill, the More Homes, More Choices Act, contains alterations to the 2017 cannabis control act as well as laws relating to conservation authorities, environmental assessment and protection, endangered species, labour relations, local planning appeals and development charges, and education. The bill also guts the Endangered Species Act, allowing developers to pay a fee to avoid protecting the habitat of species-at-risk, allows for reduced protection if the species exists somewhere else in the world, and reduce the scope of Conservation Authority activities.

It also includes the removal of a requirement that developers convey a portion of the land they are using to the local municipality for park or other public recreational purposes.

It "does a lot for developers and too little for Ontarians looking to live in walkable communities, with local services and green space," Tim Gray, Environmenal Defence's executive director, said in testimony. "Instead, we will get more gridlock, lost farmland and houses people can’t afford.”

The bill is scheduled for a third reading at Queen's Park next week, before the legislature breaks for summer.

"Bill 108 is a massive overhaul of municipal planning, changing the way our communities are built and transferring power and wealth from elected leaders to private developers," Ontario Green Leader Mike Schreiner said in a statement.

"By letting developers off the hook from making fair contributions to community growth, it will be people, taxpayers and wildlife who pay the ultimate costs," he added. "The health of our communities will suffer if cash-strapped municipalities can no longer ensure that parks, daycares and rec centres are provided in new developments."

"And I worry about sprawling subdivisions that chew through wildlife habitat, increase pollution, and drive up property taxes, all while failing to bring down the cost of housing."

"Bill 108 is well-thought out and comprehensive -- providing solutions that will help us collectively get to more supply, more cost certainty, and less red tape," said Dave Wilkes, CEO of the Building Industry and Land Development Association.

Construction industry stakeholders were a major financial backer of Ontario Proud, according to a report the group submitted to Elections Ontario. The group posted in support of Ford and the Progressive Conservatives on social media networks before the July 7, 2018 election, and has since said it is "building a war chest to take down Justin Trudeau" in the federal election this October.

Ontario Proud — which promote lower taxes, accountability and ethics in government, and “personal freedom" — was a major provider and amplifier of voices against former Ontario premier Kathleen Wynne.

Wilkes said the Building Industry and Land Development Association had commissioned a report that found that 24 per cent of the price of a new condo and 22 per cent of a new single detached home resulted from government taxes, fees and charges.

But it is not clear what mechanics would be used to pass any reduced cost savings on to consumers rather than benefiting developers.

"People are going to have massive property tax increases so that developers can make a bigger profit. It’s totally unacceptable,” the chair of the Halton regional council said.

Perks, Wong-Tam, and fellow councillor Josh Matlow released a letter ahead of the hearing signed by scores of Ontario leaders urging the government reconsider its scaling back of environmental protections.

“It’s fast and easy to turn a wetland to a suburb. It’s almost impossible to turn it back,” former environmental commisioner Dianne Saxe said at a news conference organised by Matlow at Queen's Park.

The city of Halton, about 60km west of Toronto, is one among many municipalities calling on the provincial government to halt the passage of the bill in order to allow more fulsome consultation.

Mayor Rob Burton of Oakville, a city just west of Toronto on the shores of Lake Ontario, slammed the Ford government as a 'centralized authoritarian regime' which he worries will remove the ability of local councils to control wildlife management.

The municipalities of York, Muskoka Lakes, Oakville, Archipelago and Lennox-Addington have all also voiced their opposition to Bill 108 and passed motions or resolutions to that effect.

But the government is pressing on, requiring MPPs to submit proposed amendments later on Friday for consideration by the committee when it reconvenes for a line-by-line vote on Monday.

"Good democracies allow for thoughtful consideration of legislation, not rushed deadlines," said Nathalie Des Rosiers, the Liberal MPP for Ottawa-Vanier and critic for municipal affairs, housing and the environment.

After 1 day of public hearings on the Housing #Bill108, the government is giving legislators ONE HOUR to get amendments together before the deadline tonight. Good democracies allow for thoughtful consideration of legislation, not rushed deadlines. #onpoli #housing

During the proceedings, Toronto Centre NDP MPP Suze Morrison posted snippets of written submissions from residents and stakeholders who didn't get a chance to speak in person.

"As someone who has been studying homelessness in Ontario for the past quarter century, I can say for certain that Bill 108 will not address the needs of the citizens of Ontario who are the most in need of affordable housing," she quoted someone identified as William saying.

Extreme weather events like flooding, forest fires and droughts are rapidly becoming the norm, exacerbating a housing crisis that's being felt across the country, Trudeau said in a speech to members of the Canadian Federation of Municipalities.

Our communities are what make Canada such a great place to live, and our government will always support them. That’s why we’re working with Mayors – at @FCM_online today & every day – to grow our economy, create jobs, & build strong, thriving communities for people to call home. pic.twitter.com/nWqprnVfhl

The Ontario premier is playing politics with communities, Trudeau said, with citizens paying the price.

This week, the Ford government cancelled retroactive funding cuts to municipalities, but Trudeau said he's not convinced the Ontario premier has really heard what local lawmakers are telling him.

Ford told reporters and workers at a nuclear power plant in Darlington that municipalities had said they could find ways to cut costs but would need more time, and that he had given them six more months.

“I’m just doing my best," he said, repeatedly telling the workers he had their back. "I never stop fighting for people, that’s my job.”