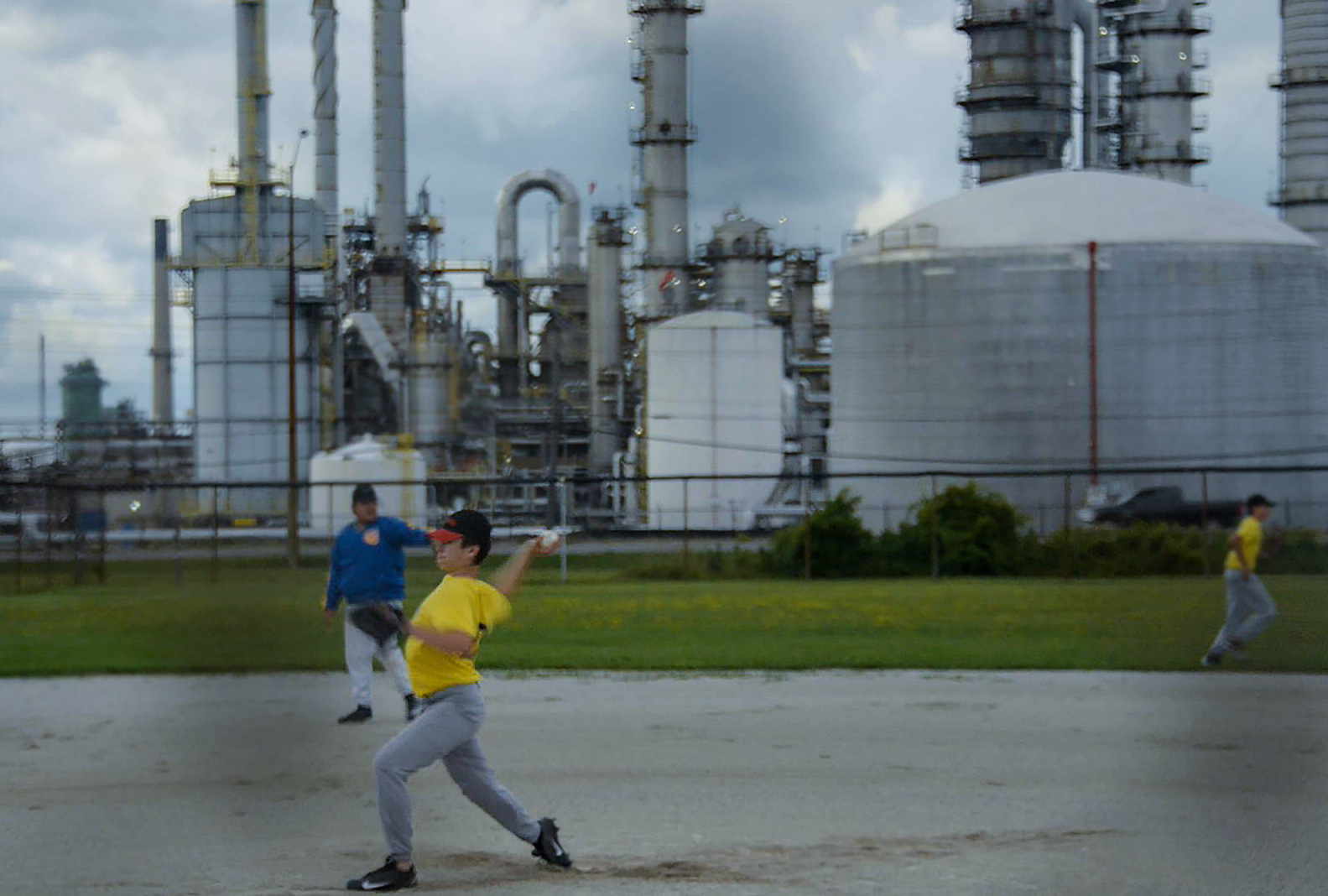 Baseball players take the field in the shadow of a Sarnia chemical plant in 2018. Image by Trevor Owens from Global News report on Nov. 14, 2018
Previous story
Next story

The top medical officer in Lambton County, a region surrounded by petrochemical plants, engaged in an animated online debate on Friday with authors of a recent peer-reviewed study that revealed elevated rates of a type of leukemia in several industrial Ontario towns.

The study was published several months ago and largely went unnoticed by public officials until it came to light in a May 28 report by Global News and National Observer on Tuesday. The research showed elevated rates of acute myeloid leukemia (AML) in Canadian border towns, including Sarnia, Ont., a city whose petrochemical manufacturing sector is referred to as Canada’s Chemical Valley.

Overall, the data indicated Sarnia had about 1.5 times more cases of AML than the national average, but the frequency of cases was even higher on the north side of the city and in the neighbouring village of Point Edward.

Responding to a mass email sent by the lead author of the study, Ivan Litvinov, to journalists and other stakeholders, Sudit Ranade, Lambton County's medical officer of health, said in a mass email of his own that the new study used flawed scientific methods by not properly accounting for age and other factors.

“Poorly conducted studies (such as this one) cause significant harm to the public as we continue our efforts to search for the proportion of illness that is attributable to environmental contaminants, including those from industrial emissions,” said Ranade, who is the head of Lambton Public Health, in an email sent on Friday.

Ranade also noted in his email response that he was only concerned about “using the best science” to support and sustain the health of people in his community.

“I’m not trying to drive readership of my work and I’m not beholden to industry or grassroots activists,” he said. “Science and truth advance not with one study, but with many studies that point to the same thing. I want that truth, too, but it has to be done the right way.”

Ranade’s email came after he went public with his criticism of the new research.

An alarming new study suggests living in some Canadian industrial cities may increase your chance of getting cancer. The worst hot spot: Sarnia, ON.

'This is the scientific process'

Litvinov, a dermatologist from the research institute of the McGill University Health Centre in Montreal, triggered the email exchange with a message sent on Thursday.

Litvinov told Global News and National Observer in an interview that he welcomed criticism and praised health officials for pursuing the research.

He also said the research paper actually addressed the concerns raised by the local health official along with other factors that needed further research.

“Just like any study, there are limitations, and this is the scientific process where we are looking at the data, in good faith, and we are reporting it and hoping people will continue researching it,” Litvinov said.

“I’m welcoming the criticisms that are there. We are well aware of this. This was presented in the discussion section during the peer-review process.”

The study also found elevated rates of AML in Hamilton, Thunder Bay, Sault Ste. Marie, Sarnia and St. Catharines, which are all Ontario cities near the U.S. border.

The authors also issued a call to action for the installation of more high-efficiency air filters to control pollution from plants in areas with high rates of AML.

Ranade disagreed with Litvinov’s explanation, telling Global News and National Observer in a phone interview on Friday that the paper included speculative analysis about age without using available data.

The AML study had found particularly high rates of cancer in an area of Sarnia that also had a statistically high proportion of people above 65, according to Lambton County’s public health officials.

Crystal Palleschi, an epidemiologist from Lambton Public Health, told Global News in an earlier interview that the local agency has found higher rates of some illnesses, such as mesothelioma and lung cancer, in its own research but that it had never specifically studied AML.

“The main limitation that I noticed (in the Litvinov) study was that the rates aren't adjusted for the age of the population,” she said on May 10.

“… At the end of the paper, (it) suggested that these differences were too large to be explained just by age. They didn't use the methods that are commonly used to age standardize the rates and better standards we used to allow better comparisons between areas with different age structures.”

When asked on Friday why she didn’t use the word “flawed” in her earlier comments, Palleschi explained that it was a matter of her trying to stick to the limitations of how scientists usually speak about areas of uncertainty.

“A limitation is fairly significant so I was bringing that up as a major limitation of the paper,” she said, during the phone call with Ranade. “I didn’t use the word flawed. I probably wasn’t as forceful but I was trying to raise it as an issue that you should be really concerned about in looking at this paper.”

Ranade said that the point they were trying to make from the public health agency’s perspective was that studies like these are important but need to be done in the right way.

He also made a point of noting he wasn’t advocating on behalf of industry or activists because he said he has been criticized over his comments about the study.

“I think that there have been comments on social media around the story, and there are a lot of people who presume that because I have come out critical about this study and its methods that I must, therefore, be aligned with some stakeholders who have a stake in this industry. And I just wanted to clarify with people that that’s not the case," he said. "That’s not the position of public health and that’s not what we do.”​​​​​​​

Ranade said he was also scheduled to speak by phone with Litvinov to discuss the research in more detail.

In Montreal, Litvinov noted that his team didn’t have access to all of the data it needed, recommending further analysis of factors such as ethnicity, smoking history, residential history, exposure history, obesity, previous treatments and the molecular composition of the disease.

He added that he hoped to see a complete examination of all the factors, urging health officials not to examine only one of the factors in isolation.

“If they start cherry-picking then we aren’t going to go anywhere,” he said.

Palleschi agreed previously that more research was needed to get to the bottom of what was happening.

“I think the main thing is ... to understand these types of studies can't determine causes. They can only really suggest areas that require more study,” she said on May 10. “It tells us that there is a higher rate than average… but we don't know why and so it leads to the questions for a followup study.”