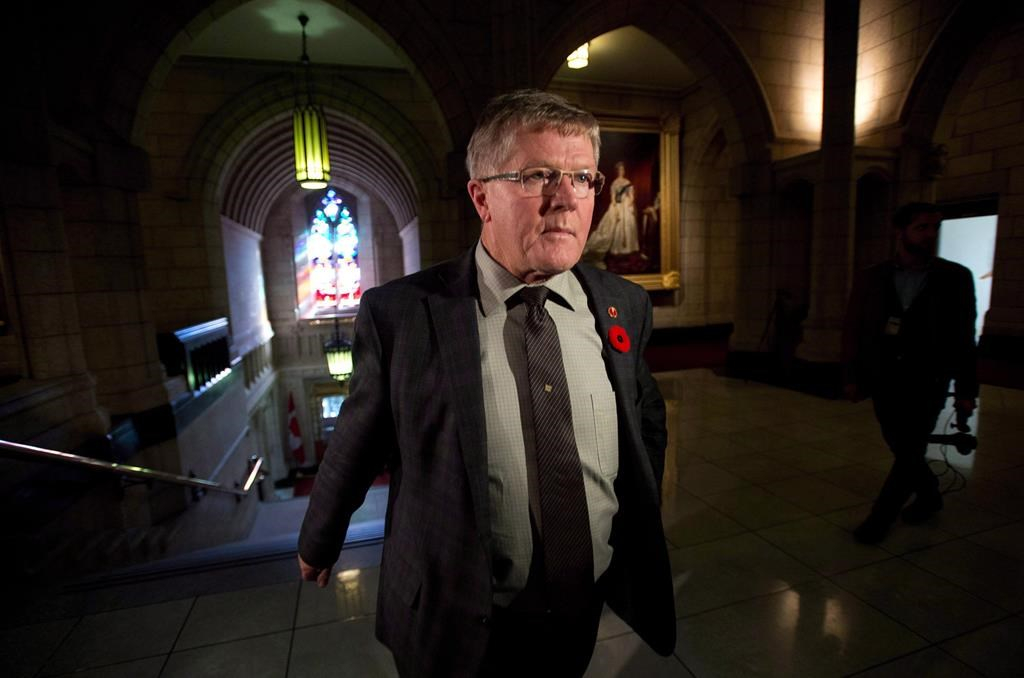 Conservative senators are being blamed for running out the parliamentary clock on a number of bills, including several aimed at advancing the rights of Indigenous Peoples.

The Conservatives' Senate whip says the Liberal government will have only itself to blame if the bills aren't passed before Parliament breaks for the summer and the subsequent fall election. Sen. Don Plett says allegations of Conservative stalling tactics are unfair.

Nevertheless, it's the Tory contingent in the upper house, and Plett in particular, who are bearing the brunt of Indigenous leaders' wrath.

Perry Bellegarde, national chief of the Assembly of First Nations, has accused Conservative senators of employing "outrageous, shameful and undemocratic procedural tactics" to make sure Bill C-262 never sees the light of day. That's a private member's bill introduced by New Democrat MP Romeo Saganash that would ensure federal laws are harmonized with the United Nations Declaration on the Rights of Indigenous Peoples (UNDRIP).

Bellegarde was supposed to testify about the bill Wednesday at a meeting of the Senate's aboriginal peoples committee. His appearance was abruptly cancelled after Plett used a procedural manoeuvre to prevent the committee from meeting.

That set off something of a Twitter war of words between Plett and Independent Sen. Murray Sinclair, former head of the Truth and Reconciliation Commission.

"It took the UN 24 years to pass UNDRIP and Senator Sinclair expects the Senate APPA committee to deal with it in less than 24 days," Plett scoffed in response to one Murray tweet about the cancelled meeting.

"Yes ... me and the rest of Canada think two years in the House of Commons and one year in the Senate is long enough," Murray retorted.

Saganash issued a harshly worded statement, asserting that Conservative senators are showing "disdain for the human rights of Indigenous Peoples" and appear to "prefer to perpetuate colonialism and injustice." If Conservative Leader Andrew Scheer can't or won't control his senators from killing C-262, Saganash said his party is "unfit" to win this fall's election.

The Conservatives are also getting the blame for stalling other private members' bills:

— adding First Nations, Metis and Inuit representatives to the board that makes decisions on national historic sites and monuments

The bill on judges and sexual-assault law originated in the House of Commons, with former interim Conservative leader Rona Ambrose.

If the Liberals were really serious about these bills, Plett said, they should have made them government bills. With just three sitting weeks left on the Senate calendar, he said the Senate still has at least a dozen bills to get through third readings and the priority has to be on government bills.

"Our job is to deal with government legislation," Plett said in an interview. "These private members' bills should've been dealt with a long time ago."

On the UNDRIP bill, Plett said he had an agreement with Sinclair that he would allow committee study of the legislation, provided that Justice Minister David Lametti and Crown-Indigenous Relations Minister Carolyn Bennett appeared as witnesses. Both ministers, who have urged the Senate to pass the bill, declined invitations to testify.

Moreover, Plett said Sinclair forced a month-long delay before speaking to the bill on second reading. And then Liberal-Independent Sen. Lillian Dyck, chair of the Aboriginal Peoples committee, rejected all witnesses on the bill proposed by Conservative Sen. Dennis Patterson. That, Plett charged, would have resulted in one-sided testimony from supporters of a bill that he and some other Conservative senators fear could create legal havoc and result in an Indigenous veto over resource development.

He accused Independent senators of "dropping the ball" on the bill. "They're the ones that should wear this if that bill doesn't get to the chamber (for third reading), not Don Plett."

In any event, Plett is not convinced that the Liberal government really wants Saganash's Bill C-262 to pass. Rather, he thinks they're more interested in appearing to support it in a bid to win over NDP supporters and Indigenous voters in the coming election while painting the Conservatives as anti-Indigenous.

"So they come out blowing smoke and telling us to get NDP private member's legislation through so they can go on the campaign trail and they can tell every Indigenous person, 'We fought for you' and when there's a minority government, they can go to the NDP and say, 'We tried, we tried to get your legislation through but there are those bad guys, they wouldn't do it,' " Plett said.

"That's my suspicion. Why else would they want us to deal with a bill then refuse to come and testify?"

—With files from Kristy Kirkup