'It's scary': Pro-pipeline activists in Calgary anxious about Trudeau policies 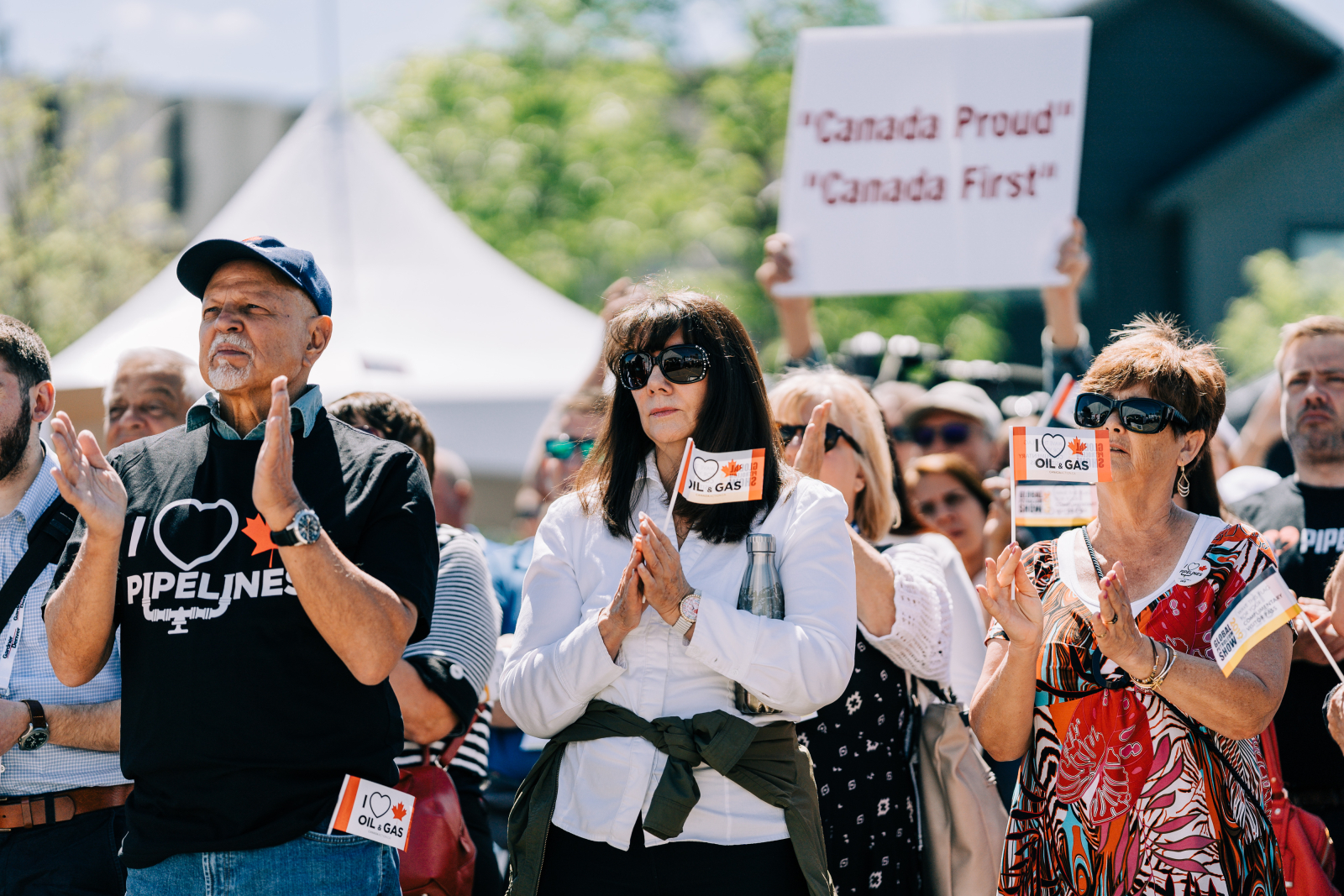 Hundreds of people turn out for a pro-pipeline rally with a distinctively anti-Trudeau flavour in Calgary on June 11, 2019. Photo by Louie Villanueva
Previous story
Next story

Unemployed drilling engineer Tammy Gates woke up Tuesday in a relative’s basement where she says she’s been forced to flop after four years without work.

But instead of fine-tuning her resumé, the 47-year-old mother of one decided she would attend a rally to protest federal government policies she believes are insensitive and hurtful to Albertans like her who depend on the energy sector for their livelihoods.

“The Trudeau government worries about layoffs at General Motors in Oshawa or the prospect of job losses at SNC-Lavalin, but what are they doing to help the hundreds of thousands of unemployed people in this province?,” she said

Down to the last $7,000 on her line of credit, Gates says she has had to abandon her MBA studies and withdraw her son from boarding school as she has struggled to make ends meet.

“It’s scary,” she said. “I’ve had to teach my son some hard economic lessons at a very young age.”

Having worked much of her career overseas, Gates understands that oil prices are set globally and that producers of light crude like Saudi Arabia or Bakken crude in the U.S. have lower costs than Alberta’s predominantly heavy-oil industry.

But she believes higher corporate taxes in Canada and the shortage of pipeline capacity to get Alberta’s oil to markets outside North America are the real reason she and so many other Albertans are out of work.

Chanting the familiar refrain “Build that pipe,” Gates joined a large crowd, which organizers claimed was 4,000 strong, who gathered on the Calgary Stampede grounds on Tuesday, a week before the federal government’s anticipated decision on the stalled Trans Mountain expansion for what was billed as the largest pro-oil-and-gas rally in Canadian history.

While the event was promoted as non-partisan, it had a distinct anti-Justin Trudeau flavour. Many in the crowd waved signs and wore T-shirts that expressed opposition to the Trudeau government’s decision to impose a price on carbon pollution, as well as to other proposed legislation they believe will further hurt Alberta’s ailing energy industry. And they listened to speeches from right-leaning politicians who promised to make their voices heard in the nation’s capital and, eventually, oust the Liberal government.

Trudeau’s Liberals have said they are trying to strike a balance that restores public trust and credibility to major project reviews in the wake of mounting public opposition to pipeline projects and setbacks from court decisions that have reversed federal approvals of two major West Coast oil pipeline projects.

Saskatchewan Premier Scott Moe, who was initially alone in opposing the carbon levy through the courts, said there were now five provinces opposed to the tax.

Small business owner Barry Symborski sported a T-shirt with a derogatory description of Trudeau, while his wife, Lee, carried a sign denouncing the proposed federal Bill C-69, which she believes will make future pipeline projects difficult if not impossible to build.

The couple say they have had to use their retirement savings to keep their Calgary home security business afloat these last few years as customers who lost their jobs in the energy sector cancelled their monitoring contracts.

“We’re pissed off and we want to get rid of our prime minister,” he said.

“We just wish there was a better alternative than (federal Conservative Leader) Andrew Scheer,” his wife added.

Five Conservative premiers, including Moe and Alberta’s Jason Kenney, sent a letter to Trudeau this week, voicing concern Bill C-69 and a proposed oil tanker moratorium of B.C.’s northern coast would have “detrimental effects on national unity.” (The non-partisan premier of the Northwest Territories also signed the letter.)

In an interview, Moe rejected the suggestion the rhetoric regarding federal energy policy was becoming too fiery.

“It’s the prime minister who is pushing these divisive policies,” he said. “He has a letter on his desk and he needs to start listening.”

In Ottawa, Trudeau fired back on Wednesday, saying that his government is improving a process that failed under former Conservative prime minister Stephen Harper.

“They were unable to get big projects approved because they sidelined Indigenous concerns,” Trudeau told reporters before the weekly Liberal caucus. “Now the Conservatives still seem to think that the way to get big projects built is to ignore Indigenous peoples and ignore environmental concerns. Well, that didn’t work for 10 years under Stephen Harper and it’s certainly not going to work now.”

Kenney spoke to reporters after delivering a speech at the Global Petroleum Show prior to the rally. The Alberta premier reminded delegates of his government’s corporate tax cuts and declared the province open for business. He also warned that there might be dire consequences if Ottawa doesn’t reverse course on legislation that he says will negatively impact the energy industry.

“We’ve seen recent polling showing that 50 per cent of Albertans can foresee secession from the federation,” Kenney said. “My message to Ottawa is please take that seriously.”

Kenney’s speech was briefly delayed when a protester was detained by police after he rushed the convention hall stage, shouting about the “hypocrisy” of the energy trade show.

“You have a moral imperative. We all live on this planet. Quit lying to yourselves,” he said as he was dragged from the podium.

At Tuesday’s oil and gas rally, Al Nielsen wore a yellow vest beneath his black leather one.

A transport driver in the oil industry for much of his career, Nielson was part of a truck convoy that travelled to Ottawa from Alberta last winter to raise awareness about the plight of those who work in the province’s energy sector.

“This rally can help open everyone’s eyes across this country,” he said. “We need to get the message out that we’re in trouble and we need help, that change is necessary and we need to get out to the polls this fall. … There’s a lot of things we need to fix in Canada, but helping the energy industry is a good place to start.”

A day after the rally, Gates has a potential lead on a job.

It’s not with an oil and gas company, but as a consultant in the $30-million communications war room that Kenney is creating to combat what his government believes is misinformation about the Alberta energy industry, particularly the negative environmental impacts of the oilsands.

Scientists and governments around the world have agreed that the planet is warming and that much of the warming over the past few decades is due to human activity, including the burning of fossil fuels such as oil, gas and coal. An intergovernmental panel assessing the most recent peer-reviewed science also released a report last fall that called for “rapid, far -reaching and unprecedented changes in all aspects of society” to limit warming to 1.5 C above pre-industrial levels in order to avoid some of the worst impacts of the climate crisis.”

But at the rally in Calgary, not everyone was convinced by the peer-reviewed scientific evidence.

“I’m not a politician, but I think some of the messaging about global warming is skewed,” Gates said. “I’ve been driving Uber Eats to pay the bills, but I would really like to be part of doing something that will make a real difference for all Albertans.”

Overbuilt Tarsands, underbuilt upgrader and refining capacity, the oil companies that have tarsands plants in Canada and refining capacity in the States are laughing all the way to the bank at the silly Albertans. In General Albertans as usual take no responsibility for the mess that they got themselves into, they chose to elect governments with no balls

Historically this is true.

Historically this is true. Conservatives chose the quick and easy money.........they imagined that not many people would bother to find out what bitumen actually was...or what had to be done to it to make it flow through a pipeline. It was a globalist fallacy.....sell the raw material to the third world, where cheap labour could do the up grading and refining......and someone else's land base take the environmental hit from the essentially dirty process.

It wasn't a bad plan, as petro plans go. Unfortunately, they over advertised, and annoyed too many citizens...we got busy doing our own research.......and after Kalamazoo, if you lived anywhere near where one of these bitumen pipelines planned to go......you ended up radicalized.

They brought the current situation on themselves..........even the drop in prices is at least in part a result of the over production of fossil fuels around the world.

One has to wonder what their hurry was? Did they know all along that global awareness of Big Oil's roll in Climate Change was not far away?

We know now Alberta....and your doubts about the science don't move us. There is no future in Tar.

I'm confused. Alberta was plunged into recession by a national leader all right: by Mohammed bin Salman, who deliberately cranked up production to tank the price of oil in an effort to drive the American "frackers" broke, back in 2014. Alas, the frackers refused to die, finding new economies and hanging on - so MBS only turned down production slightly in concession, and the price of oil never recovered.

So, if a carbon tax that *raises* the price of oil is a Bad Thing, then MBS should be a hero for drastically lowering it, thus promoting sales. No?

Sorry for the reductio ad absurdum. Fact is, the sales of oil are almost unaffected by price; farmers gotta run tractors, shipping companies can't ship without bunker fuel, truckers can't truck without diesel. Very little fossil-fuel consumption is actually optional. Check out the effect of the 1973 oil embargo that drove prices up 500%, from about six bucks a barrel to thirty. (Quadruple those numbers for inflation-compensation.)

Consumption dipped for a bit, mostly because of availability, the gas line-ups. But then it went right back to where it had been, though the economy suffered from the billions being sent to the Middle East.

So the carbon tax won't drop sales much, because it can't.

And MBS will probably get a free war with Iran now, in unstinting support of his destroying Albertan jobs, Syrian lives, his own women activists, American journalists, and most of Yemen.