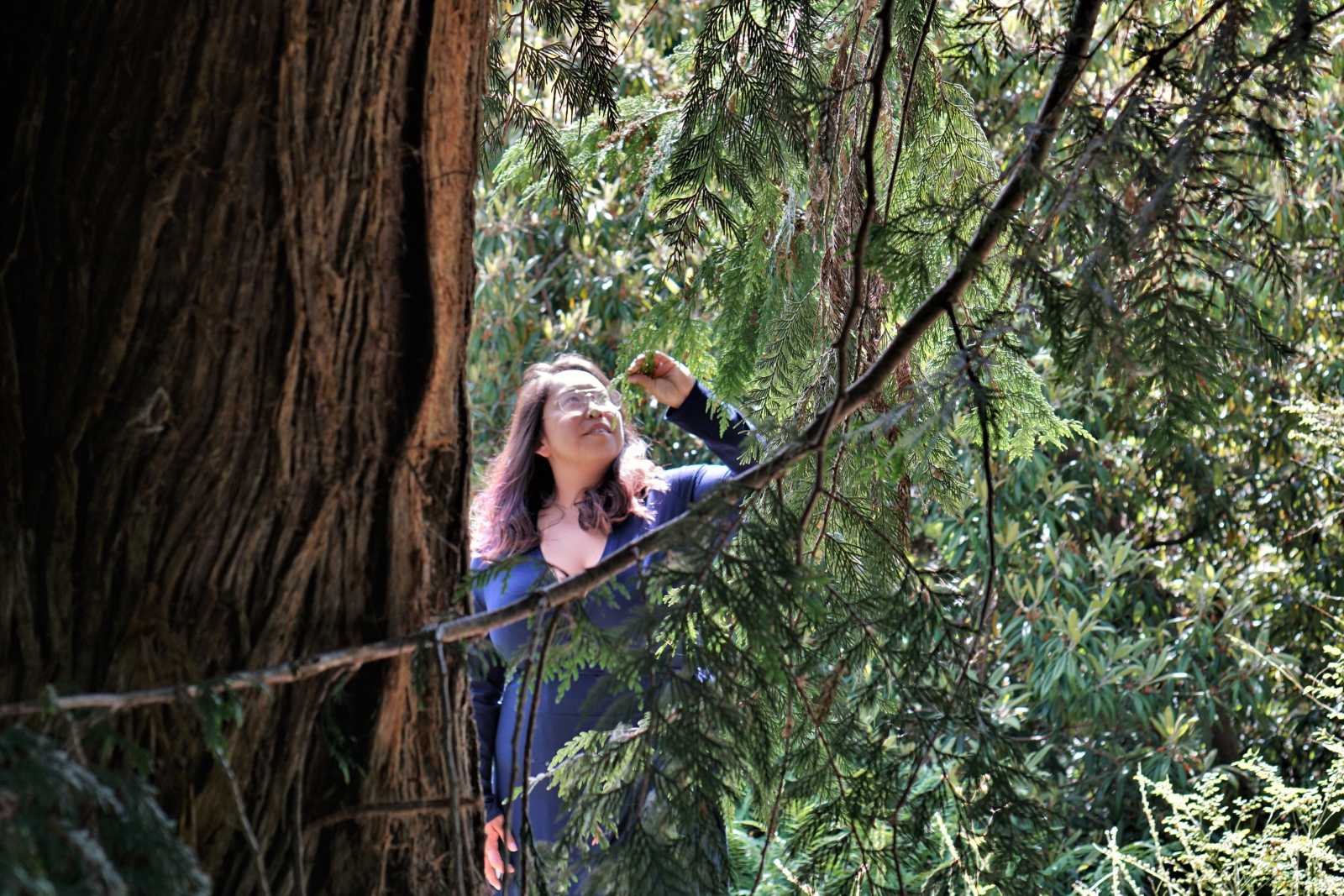 Vanessa Campbell, with the Musqueam language and culture department, looks at a western red cedar in the UBC Botanical Garden on June 12, 2019. Photo by Stephanie Wood
Previous story
Next story

Despite growing up close to the University of British Columbia, which sits on xʷməθkʷəy̓əm (Musqueam) territory, Vanessa Campbell says that until recently, she’d never visited the school’s botanical garden.

"I grew up right beside the botanical garden my whole life, and I never came," she said.

Campbell only visited the garden, which features imported and native plants, after she began working at UBC in the Musqueam Language and Culture Department as their “font person” — meaning she ensures that words in hən̓q̓əmin̓əm̓, the Musqueam language, are spelled correctly on signage on campus and around the city.

Now, she's working with the garden to teach people plant names in hən̓q̓əmin̓əm̓. More importantly, she says, she is helping build relationships between the garden and the xʷməθkʷəy̓əm community. She says that until recently, xʷməθkʷəy̓əm people rarely came.

Now she's sharing xʷməθkʷəy̓əm knowledge and history with the garden’s staff, and in return, they’re teaching her about plant species, and she's seen more of her community coming to visit.

Tara Moreau, associate director of sustainability and community programs at the UBC Botanical Garden, says she wants to do more than simple land acknowledgements — she wants true collaboration with xʷməθkʷəy̓əm in creating programs, signage and community.

Another result of Campbell and Moreau’s relationship – the garden now offers free access for all Indigenous visitors.

Campbell and Moreau's relationship began when Moreau contacted the language department to learn the hən̓q̓əmin̓əm̓ phrase for “welcome,” so it could be included on an entrance sign. For about a year since, the two have been working closely together to incorporate xʷməθkʷəy̓əm knowledge to encourage inclusivity in the garden.

"We're really wanting to advance a concept called biocultural diversity. That is trying to link biodiversity with the traditional Indigenous knowledge that goes with the plants and the ecology," said Moreau.

She says she wants the garden to balance Western scientific knowledge with Indigenous knowledge systems.

For example, Campbell explains how the hən̓q̓əmin̓əm̓ word for huckleberry includes how xʷməθkʷəy̓əm people collect the berries.

"You can hit the top of the huckleberry bush from the top and the berries will just fall," she said.

The hən̓q̓əmin̓əm̓ word is sk̓ʷaqʷcəs, which Vanessa says roughly translates to "tapping berry."

"The name for the plant talks directly about how you harvest it," she said.

Moreau hopes that seeing hən̓q̓əmin̓əm̓ around the garden, and some international languages, will make all people feel welcome.

"One of the things I've struggled with, in terms of community gardens, is there can often be a lack of inclusion and diversity," she said. "One of my experiences with gardens and creating inclusive space is that people need to see themselves reflected."

Campbell and her team from the language department are finding hən̓q̓əmin̓əm̓ translations for plants, birds and wildlife that could be used in the future for signs and brochures.

The garden is also home to some plants that have traditionally been used in Indigenous medicines, such as stinging nettle. The garden hopes to work with xʷməθkʷəy̓əm to make these plants available for harvest again in the future.

More than anything, Campbell wants to see more xʷməθkʷəy̓əm people come and enjoy the garden that sits on their territory. "I really like, just in the last year, how many xʷməθkʷəy̓əm people have been here," she said. "I brought my best friends and my nieces. I'm excited to see the love for the garden grow in my community."

People of the məθkʷəy̓ plant

Campbell and Moreau have also begun a more challenging journey: identifying the plant that lies at the heart of the word xʷməθkʷəy̓əm.

Years ago, people transcribed the origin story of the word xʷməθkʷəy̓əm into English.

A two-headed serpent, a sʔi:ɬqəy̓, lived in what's now known as Camosun Bog. It emerged and crossed over the land, killing everything in its path. But its droppings created a new plant: the məθkʷəy̓.

"The name xʷməθkʷəy̓əm translates roughly to 'the place where məθkʷəy̓ grows,'" said Campbell.

The məθkʷəy̓ was described as a saχʷəl, which means “grass” or "plant." It was initially transcribed to English as a grass, and for some time the xʷməθkʷəy̓əm people have been known as “people of the river grass.”

But Campbell and her team learned about the multiple meanings of saχʷəl, and they now believe the məθkʷəy̓ is a plant.

She's looking for descriptions of the məθkʷəy̓ plant in xʷməθkʷəy̓əm archives, and bringing them to Moreau and horticulturists at the botanical garden. They hope that, together, they can identify the plant.

Campbell says this is important work for xʷməθkʷəy̓əm, since they have lost so many fluent speakers.

"We're just really trying to unpack or relearn pieces about the language," she said.