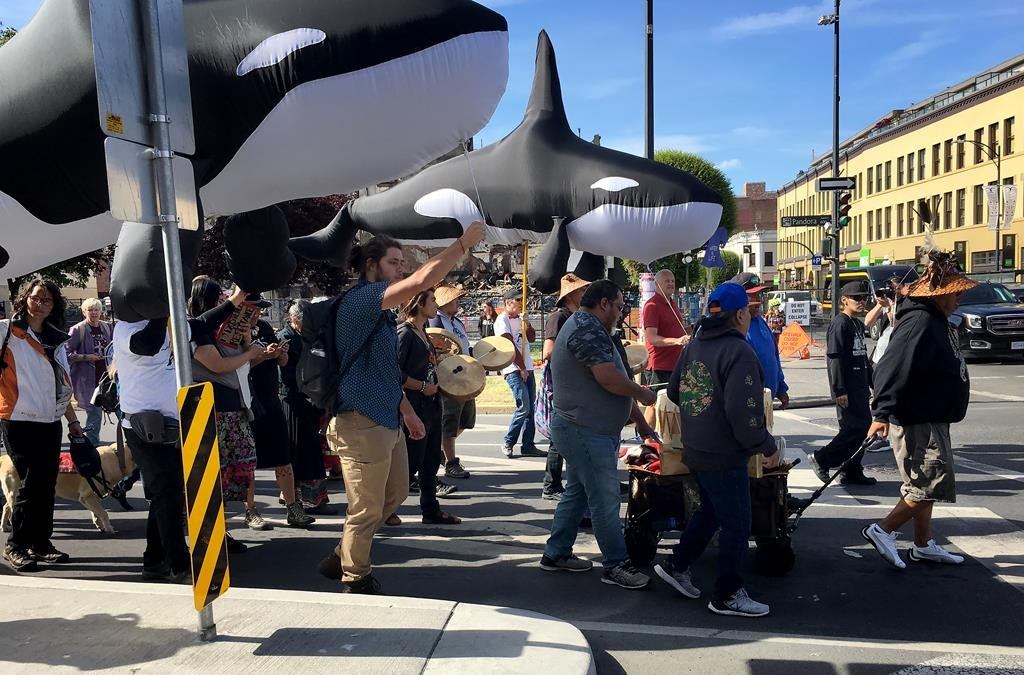 Demonstrators march down Government Street during a protest against the approval of the Trans Mountain pipeline, in Victoria on Saturday, June 22, 2019. Photo by The Canadian Press/Dirk Meissner
Previous story
Next story

About 300 demonstrators were adamant in their commitment to fight the pipeline twinning project, approved this week by the federal Liberal government, as they prepared to embark on a 22-kilometre march to a beach south of Victoria.

Indigenous drummers led the anti-pipeline protest along the route that passed through Victoria to Island View Beach, located near Victoria International Airport. The demonstrators, some carrying placards saying, "Don't be Crude," and "What part of NO do you not understand," walked down the middle of downtown streets escorted by police vehicles with their lights flashing.

Eric Doherty said he was prepared to walk more than 20 kilometres to join what he believes will be a public groundswell against the pipeline expansion.

"Governments approve all sorts of things and then they face the people on the street and they get cancelled," he said. "That's how societies turn around is people hit the streets."

The government originally approved the expansion in 2016 but after the Federal Court of Appeal shelved the original approval last summer, a second National Energy Board review was ordered to look at the impacts of oil tankers on marine life. Former Supreme Court justice Frank Iacobucci was also hired to oversee a new round of consultations with 117 affected Indigenous communities.

Ottawa bought the existing pipeline a year ago for $4.5 billion, when Kinder Morgan Canada investors decided to sell. The energy sector and Alberta argue existing pipelines are at capacity and the oil sands need more ways to get product to market.

B.C. Premier John Horgan said he was disappointed with the project's federal approval and the province will continue with legal challenges. Horgan has said often increased oil tanker traffic increases the chances of a catastrophic spill on the West Coast.

"We can stop it," said Henry. "We can stop it by saying, "No," to this unwanted pipeline. You know in the next few months we have two elections coming up."

She said she was referring to the October federal election and United States election in 2020.

She said the pipeline project represents ongoing developments with the potential to harm the environment and quality of life in exchange for the promise of jobs and profits for big oil companies.

Gibbs, who painted her face in bright colours for the protest, said she supports economic ventures that do not threaten the environment.

Gibbs wore a name tag on her dress that said: "Hello, my name is the environment."

Following the demonstrators was a truck towing a tiny wood house similar to ones First Nations have built along the pipeline path in B.C.’s Interior.