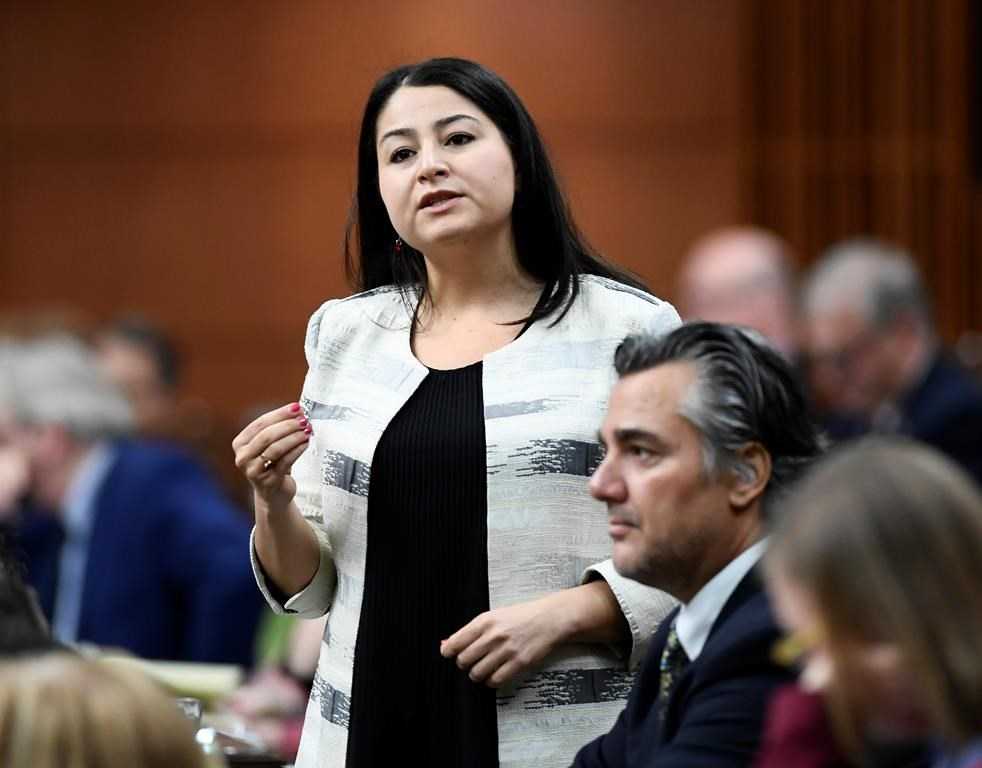 Minister for Women and Gender Equality and Minister of International Development Maryam Monsef rises during Question Period in the House of Commons on Parliament Hill in Ottawa on Friday, April 5, 2019. File photo by The Canadian Press/Justin Tang
Previous story
Next story

The federal government will fund more than 100 projects to "honour the lives and legacies" of missing and murdered Indigenous women and girls, Gender Equality Minister Maryam Monsef announced Monday.

Funding for the commemorations will come from a $13-million fund Monsef unveiled in Winnipeg, though the limited range of recipients concerned the commissioners of the national inquiry who reported on the subject at the beginning of June.

"Our government is listening to survivors and families who have told us that in order to move forward meaningfully, we must also pause to remember and honour those who are missing and whose lives have been lost," Monsef said in a statement.

"That is what we are doing by supporting these commemorative projects across Canada — ensuring that we will never forget our sisters in spirit and that we can prevent such tragedies in the future."

Monsef said the approved projects include events, activities and creative works organized by First Nations, friendship centres and social-service agencies that help Indigenous people. Besides women and girls, they're supposed to honour the lives of LGBT and two-spirit people who've suffered similarly.

— One $493,000 project is to bring families together in 13 Inuit communities in Manitoba, Nunavut and Labrador to hold healing sewing circles and make red parkas to commemorate loved ones who are missing or known to have been murdered.

— A $150,000 grant to the Victoria Native Friendship Centre will support performances in three cities of an opera, "Missing," by Metis-Dene playwright Marie Clements.

— A $200,000 project led by the Ontario Native Women's Association will see art exhibitions in four cities to honour the lives of the missing and murdered in Ontario.

Last winter, the government asked for proposals for commemorations. The inquiry's interim report in 2017 called on the federal government to establish such a fund in co-operation with Indigenous organizations, "family coalitions, Indigenous artists, and grassroots advocates."

Approvals were underway when the national inquiry issued its final report in early June.

In that report, the inquiry commissioners said they were glad to see the government funding these projects, but weren't pleased that only "legally constituted organizations" would receive money, leaving out informal and grassroots groups.

"This excludes these very same family coalitions and grassroots organizations we wanted to include, who have been organizing around missing and murdered women, girls, and 2SLGBTQQIA people for decades with very little support," the report said, using an acronym for two-spirit, lesbian, gay, bisexual, transgender, queer, questioning, intersex, and asexual.

"It can be a long and onerous process to legally incorporate as an organization; coupled with the very short time frame organizations were given to apply, this almost certainly excludes the very groups we intended this recommendation to reach."

Monsef spokeswoman Justine Villeneuve said the call for projects required that applicants work with communities, survivors and families in conceiving their proposals so they "could define how to help honour the lives and legacies of their loved ones," and applications also had to explain how survivors and families will be involved in the final work. Also, she said, Indigenous external review committees examined the applications.

The government had planned to spend $10 million on the projects but upped the amount to $13 million because of the high demand, she said.

Canada's treatment of Indigenous women not a 'genocide': Andrew Scheer