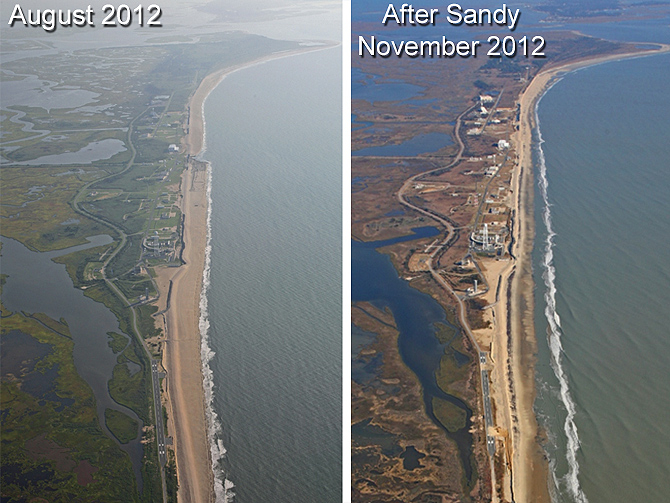 Aerial photographs of the NASA Wallops facility and coastline. On the left is from August 2012 after completion of a Shoreline Protection Project. On the right is from November 2012 after Hurricane Sandy swept by. Credit: NASA
Previous story
Next story

When Superstorm Sandy slammed into the U.S. East Coast in October 2012, low-income communities in New York and New Jersey were the hardest hit. The storm surge inundated schools and public housing in African American and Latino neighborhoods. In some areas, power outages lasted for weeks.

Meanwhile, in lower Manhattan, the headquarters of investment bank Goldman Sachs escaped significant damage thanks to a wall of sandbags constructed around the building’s entrance. And backup generators allowed the company to keep the lights on.

This scene of economic disparity during a natural disaster is highlighted in a new United Nations report that warns “human rights might not survive the coming upheaval” from global climate change.

“We risk a ‘climate apartheid’ scenario where the wealthy pay to escape overheating, hunger, and conflict while the rest of the world is left to suffer,” author Philip Alston, the U.N. special rapporteur on extreme poverty and human rights, said in an accompanying statement.

In the 21-page report, Alston said the climate crisis is an “unconscionable assault on the poor.” He also argued that steps taken by the human rights community, including the U.N., to combat climate change have been “patently inadequate” and “entirely disproportionate to the urgency and magnitude of the threat.”

Scientists around the globe have sounded the alarm that world leaders are quickly running out of time to prevent catastrophic warming. A report in October by the Intergovernmental Panel on Climate Change, the leading U.N. consortium of researchers on the issue, pegged the cost of climate-related damages caused by a rise in global warming of 1.5 degrees Celsius (2.7 degrees Fahrenheit) above pre-industrial levels at $54 trillion. The world has already reached the 1.1 degrees Celsius mark. (just shy of 2 degrees Fahrenheit).

Without swift action to rein in carbon emissions, the IPCC said, coastal cities will be inundated by rising seas, oceans will be largely devoid of the tropical corals upon which up to 1 billion people around the globe depend, and extreme weather will wreak havoc around the globe.

Tuesday’s report declared that the looming catastrophe has the potential to unravel five decades of progress in many parts of the world in improving economic and health conditions, ultimately forcing 120 million more people into poverty by 2030. It said climate change will continue to exacerbate food scarcity and health threats, forcing many to have to choose between starvation and migration.

Somber speeches by government officials have not led to meaningful action.

Alston criticized nations for failing to meet their commitments to rein in greenhouse gas emissions and the fossil fuel industry for driving the crisis and working to sow doubt about the threat.

He specifically called out President Donald Trump for rolling back U.S. environmental regulations and “actively silencing and obfuscating climate science,” and Brazil’s authoritarian President Jair Bolsonaro for his commitment to stop demarcating indigenous lands in the Amazon and to open the rainforest to additional mining.

“Somber speeches by government officials have not led to meaningful action and too many countries continue taking short-sighted steps in the wrong direction,” Alston said.

“Those who caused it least, namely the poor, will suffer far more than those who profited most,” he told HuffPost by email.

The poorest half of the world’s population accounts for just 10% of all carbon emissions, while the wealthiest 10% accounts for half, according to the report. Yet it is developing countries that will bear up to 80% of the costs of the unfolding climate disaster, a 2010 report by the World Bank found.

Don't blame God or nature. This is our fault

All the nations, politicians

All the nations, politicians and wealthy industrialists don't seem to know it yet but their blind self regard is inexorably leading to their own demise. For as long as humanity has existed - the exploiting class has depended on the labour, slave or impoverishhed, of the underclasses for buiding their wealth and power. This un-mutual interdependance has occasionally been upended when global pandemics and/or wars have, briefly, so decimated the labouring classes that the overlords had to accept compromises and implement economic and social improvements for labourers in order to maintain some semblance of their power.

Now, we have a globally falling birth rate already in place. That has not stopped the ignorant overlords from waging genocidal wars, employing weapons of mass destruction, targetting exactly the humans they are going to need to provide the human power that props up their wealth and socio/political power.

While it is true that our planet has been plundered by the burden of overpopulation and overconsumption, climate disruption looms on the horizon as the agency that will further destroy the human-powered accumulation of wealth by the global oligarchs. The oligarchs are blind to the fate that awaits them, and their descendents. The oligarchs have no vestige of interest in the fates of the undeclasses - they think only in terms of their own enrichment and utterly fail to see that the evils being visited on the underclasses, will accelerate the crumbling of their own self centered empires.