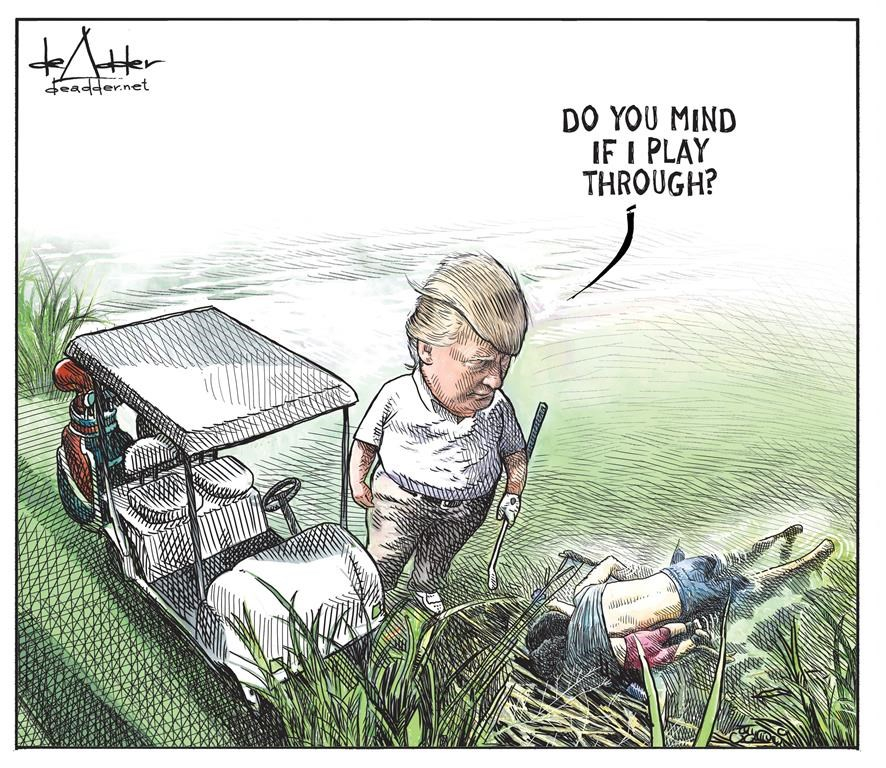 An editorial cartoonist who recently drew international attention and celebrity support for an anti-Trump sketch says he doesn't believe that piece of work was why an Atlantic media organization scrapped its contract with him. Photo by Michael de Adder
Previous story
Next story

A recent editorial cartoon taking aim at Donald Trump may have brought an Atlantic Canadian artist to international attention, but the man behind the image does not believe the sketch itself is what resulted in the loss of a working relationship he had for nearly two decades.

Michael de Adder said his online presence — replete with anti-Trump messages — is what he believes ultimately resulted in the end of his contract with Brunswick News Inc., a chain that owns many of the major media outlets in New Brunswick.

"It was left to me to figure out what the reason was," he said in a telephone interview Tuesday. "If they had (my departure) already in the works, it must have been (because) my online presence that was anti-Trump."

De Adder, a freelancer, announced Friday that Brunswick News had scrapped its contract with him. That came a day after he had posted a cartoon of the U.S. president playing golf next to the bodies of two migrants who drowned trying to cross into Texas.

The contract termination — and its timing — garnered international criticism, including from Star Wars star Mark Hamill and Canadian comedian Mark Critch. De Adder called the reaction "mindblowing" but noted that he stopped sending Brunswick News content related to Trump months ago following feedback from editors that it wasn't well-received.

Brunswick News said in a statement that De Adder did not offer the viral Trump cartoon for publication and said it was "entirely incorrect" to suggest it cancelled the artist's contract over the image. It added that it had begun talks weeks ago to work with a different cartoonist it described as a "fan favourite," and did not provide further comment.

De Adder said he had a long history of working with papers associated with Brunswick News, which is owned by the powerful Irving family. The cartoonist, who describes himself as a political centrist, said the occasional anti-Trump image was published in affiliated papers prior to 2018 but that changed in recent month.

De Adder said the Brunswick News employee who called to terminate his contrat did not explain why it was being cancelled. The cartoonist said he explicitly asked if his dismissal was related to incompetence, his online presence in general or the most recent Trump cartoon in particular and was told in every case that those were not factors.

When De Adder shared the development on Twitter, he drew a firestorm of support. Hamill was just one of many to praise the cartoonist, calling the most recent Trump image "Pulitzer Prize worthy" and congratulating him for "speaking truth to power."

"The world reaction has been overwhelming and erases some of the hard feelings or anger or sadness that I had," De Adder said. "But I still am not working for my home province. My family and friends that I grew up with aren't reading my cartoons every day, at least not in the newspaper."

Paul Knox, former professor of journalism at Ryerson University, said the case illustrates some of the complex dynamics at play in the media industry, which features a dwindling number of editorial cartoonists in an era of shrinking budgets and newsroom resources.

He dismissed critiques that De Adder's freedom of expression was being violated in this case, noting the cartoonist still maintains control of his own online platform and holds other long-term contracts with other media outlets.

But he said what happened nonetheless represents what he sees as a poor move by a media chain known throughout the industry for its close ties with the Irving family and widely perceived to have limited editorial independence.

"From a business point of view and a public life/democracy point of view, a newspaper should have a wide variety of opinion," he said. "Therefore they should not be ending a relationship with people ... because of what you do in the rest of your professional life."

Knox said employers and employees alike should come to agreements well in advance to determine whether certain issues are off-limits in order to prevent working relationships from "going south" in the public eye.