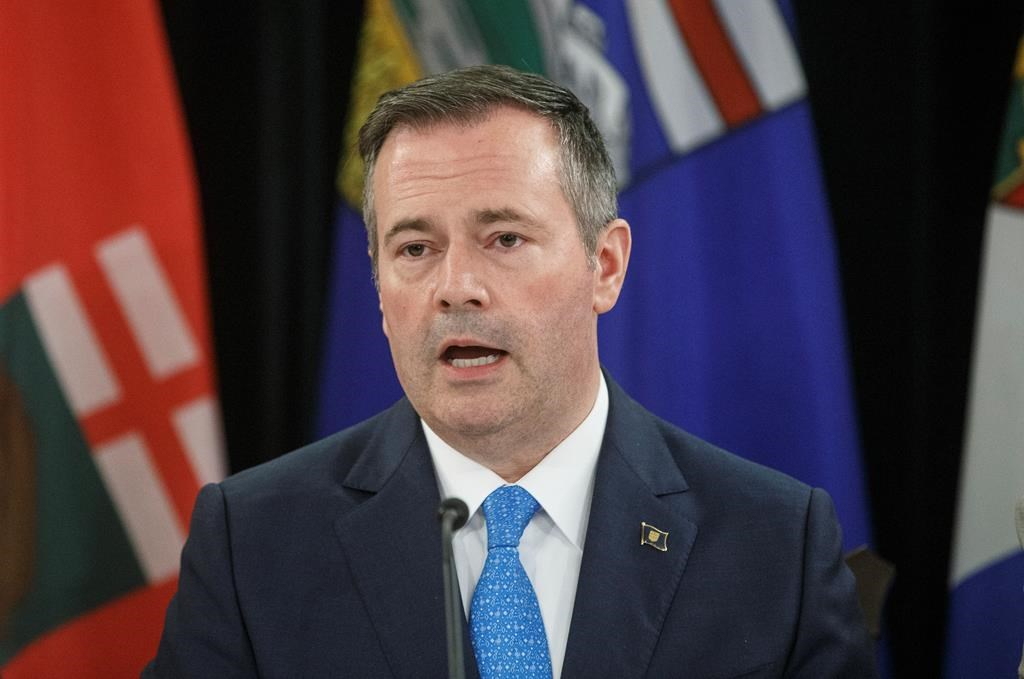 Premier of Alberta Jason Kenney speaks to media during the Western Premiers' conference, in Edmonton on Thursday, June 27, 2019. File photo by The Canadian Press/Jason Franson
Previous story
Next story

The Alberta government will hold a public inquiry into environmental groups that it says have been bankrolled by foreign benefactors hell-bent on keeping Canada's oil and gas from reaching new markets while letting oil production grow unabated in the Middle East and the United States.

"They often say that sunlight is the best disinfectant. This public inquiry will be sunlight on the activities of this campaign," Premier Jason Kenney said Thursday.

"It will investigate all of the national and international connections, follow the money trail and expose all of the interests involved."

He said the inquiry — with a budget of $2.5-million — will find out if any laws have been broken and recommend any appropriate legal and policy action.

"Most importantly, it will serve notice that Alberta will no longer allow hostile interest groups to dictate our economic destiny as one of the most ethical major producers of energy in the world."

Steve Allan, a forensic and restructuring accountant with more than 40 years of experience, has been named inquiry commissioner.

Allan's ability to compel witness testimony and records is limited to Alberta.

But Justice Minister Doug Schweitzer said much of the information Allan will need is publicly available and he'll be able to travel outside Alberta to gather more.

The first phase of the inquiry is to focus on fact finding, with public hearings to follow if necessary. Allan is to deliver his final report to the government in a year.

Opposition NDP member Deron Bilous said the inquiry is the equivalent of hiring someone to do a glorified Google search.

"I don't believe this will help Alberta further its interests in accessing pipelines and expanding our market access."

Kenney said deep-pocketed U.S. charities have been deliberately trying to landlock Alberta resources for years by funnelling money to an array of Canadian groups. Many of his assertions are based on the writings of Vancouver researcher Vivian Krause.

He blames those groups for the demise of several coast-bound pipelines that would have helped oilsands crude get to markets besides the U.S., as well as delays in building the Trans Mountain expansion to the west coast.

Krause said earlier this week that while the U.S. energy industry has benefited from anti-Canada "demarketing" campaigns, she has found no evidence commercial interests are involved.

She and Kenney both agreed it's because Canada is an easy target.

"We're very easy to pit against each other — Quebec, the West," Krause said.

Kenney said Canada has been the kid in the school yard most easy to bully.

"I think they understood that this country amongst all of the major energy producers would be the most easily intimidated by this campaign," he said. "And you know what? They were right."

"It weakens our democracy and attempts to scare citizens from engaging in the debate on issues critical to our economy and a safe climate," she wrote on Twitter.

Berman has been involved the Tar Sands Campaign against oilsands expansion — often cited by Krause and Kenney as an example of a concerted U.S.-funded effort to meddle in Alberta's energy sector.

"The mistake Vivian Krause and Premier Kenney make is thinking that it's one campaign. It's not," Berman said in an interview last month. "It's dozens of campaigns. If it's anything, it's a movement or movements."

"Canada is a very small drop in the bucket for global philanthropic dollars on climate change," she said. "(Krause's) data is wrong and the fact that Kenney has just accepted it is insane."

Deep funded foreign interests, namely American oil interests are subverting our democracy to achieve profits for shareholders who live elsewhere. Where is the Ottawa inquiry to defend us from this resource pillaging??

The "witch finder general", long nose twitching, ugly, corrupted brain seething, is now on the hunt for the anti-Albertan activists who are trying to derail the profits from the venal church of oil, its system of subsidy "indulgences" and the four horsemen of its apocalypse.