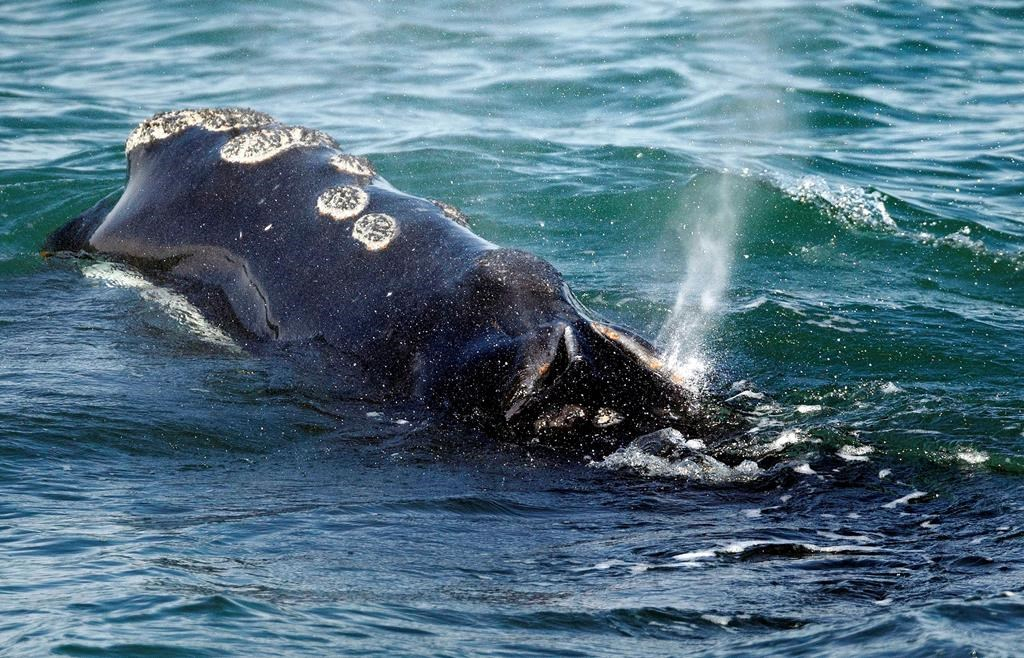 A North Atlantic right whale feeds on the surface of Cape Cod bay off the coast of Plymouth, Mass. on March 28, 2018. File photo by The Associated Press/Michael Dwyer
Previous story
Next story

More endangered North Atlantic right whales are in trouble in the Gulf of St. Lawrence.

The Department of Fisheries and Oceans says three whales have been found entangled in ropes in recent days.

One of the whales was spotted by the Canadian Coast Guard east of Miscou, N.B., with a rope around its tail, apparently dragging something heavy.

Two others were detected Thursday — one east of Gaspe, Que., and the other east of Miscou.

The government says all three entangled whales were sighted in areas already closed to fishing.

These sightings come as federal officials consider expanding speed-restriction and no-fishing zones in the gulf after the deaths of six of the whales in the last month.

The department says the three whales are being monitored.

"We are considering options for attaching tracking buoys to the ropes on these whales, if the ropes are long enough to permit crews to do so safely," the government said in a release Friday night.

"Attempts at disentanglements will only be considered if they can be done in a safe manner.

"Right whales are among the most difficult marine mammals to disentangle due to their size, strength and behaviour."

On Thursday, Fisheries Minister Jonathan Wilkinson said the government is looking at what more can be done to ensure the endangered whales are protected.

According to a federal study, measures taken so far to prevent the species from being struck by ships and getting caught in fishing gear may not be enough to keep more from being hurt or killed in Atlantic waters.

Speed restrictions and fishing-zone closures in the Gulf of St. Lawrence have lowered risks that the whales will be harmed, but dangers remain — especially in the waters outside protected zones, according to the national study.

The review was done late last year by scientists who work in federal departments and universities across Canada.

Researchers tried to determine the risks that right whales face from vessel strikes and entanglements in the gulf, the semi-enclosed body of water that lies between the four Atlantic provinces and the eastern shores of Quebec.

No deaths were recorded last year in Canadian waters, but 12 right whales were found dead in 2017, mainly from ship strikes and entanglements.

Every single death is a major blow to the species. Only about 400 whales remain on the planet and none of them are known to have procreated last year.