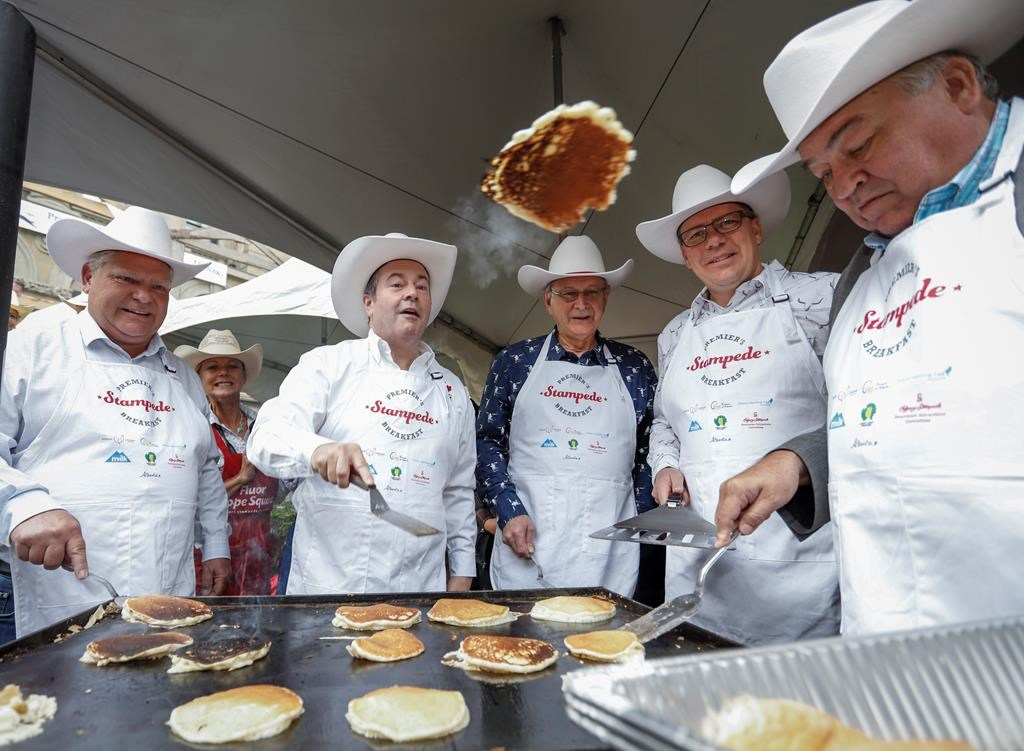 Kenney is meeting with Ontario's Doug Ford, Saskatchewan's Scott Moe, New Brunswick's Blaine Higgs and Bob McLeod of the Northwest Territories ahead of this week's Council of the Federation meeting in Saskatoon.

The visiting premiers were presented with white cowboy hats, a Calgary honour that has been bestowed on royals and other dignitaries, as well as western belt buckles.

Each premier had a turn at flipping and serving pancakes for a large, mostly friendly crowd.

A handful of people showed up to voice their displeasure of a United Conservative education bill in Alberta that they say puts gay and transgender students at risk.

Two women wearing T-shirts reading "outing kids is not in my job description" tried having their pictures taken with Kenney.

Another woman wearing a rainbow "Born this Way" flag as a cape said she was hoping to buttonhole her legislature member at the breakfast to make her concerns known.

"I came here as an ally for the LGBTQ community because the UCP recently passed Bill 8 without adding any of the crucial amendments put forward by the official Opposition that would have helped ensure that (gay-straight alliances) stayed protected both in public and private schools," Victoria Goleski said Monday.

The legislation, which passed in the legislature last week, erased measures brought in by the previous NDP government that strengthened protections for gay-straight alliance clubs, which are meant to prevent bullying and foster acceptance of LGBTQ kids in schools.

Those measures include a ban on school staff informing parents if students join GSAs and a requirement that such a club be set up immediately if the students want one.

The Kenney government has said it does not support automatic parental notification, but that the NDP's legislation was too blunt an instrument and school staff should be able to use their judgement in certain cases.

The premiers are to have formal meetings Monday and Kenney is scheduled to deliver opening remarks at an investment forum.

They're expected to wind up their Calgary gathering by taking in some Stampede rodeo action before heading to Saskatoon to meet with their provincial counterparts.