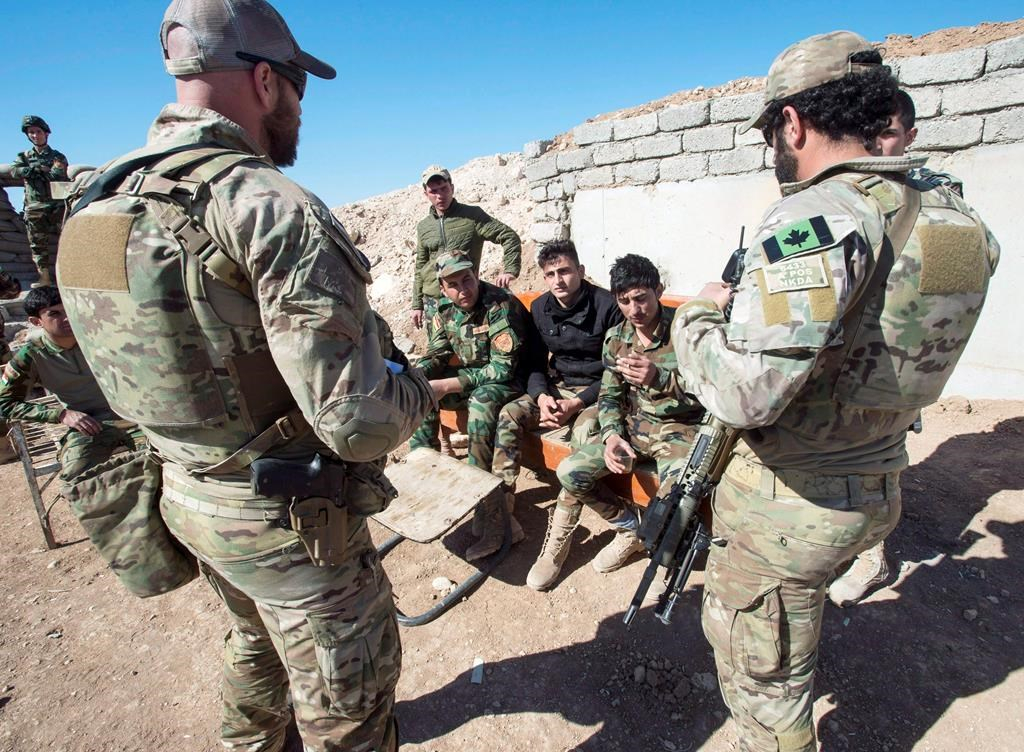 The escalating tensions in the Persian Gulf between Iran and the United States have implications for the future safety of Canadian troops in Iraq, analysts suggested Monday.

Canada has about 850 military personnel there, including regular troops, special forces, medical specialists and helicopter air crews, as well as holding the leadership of the NATO training mission for Iraqi forces, but Iranian-backed Shia Muslim militias are also on the ground.

The Iranian-backed forces had a shared interest in helping the West defeat the Islamic State of Iraq and the Levant, but there are fears they could be used to strike U.S. forces or their allies.

The U.S.-Iran tensions reached new heights on the weekend when Tehran announced it was enriching uranium beyond the level allowed by the nuclear agreement it struck in 2015 with world powers, which was designed to allow it to produce nuclear energy but prevent it from developing atomic weapons.

That followed accusations of attacks on oil tankers transiting the Middle East and Iran's downing of a U.S. drone last month while Prime Minister Justin Trudeau was visiting the White House.

The fresh tensions arose after the Trump administration pulled the U.S. out of the nuclear deal last year, launching a campaign on Tehran of enhanced sanctions that have inflicted major damage on the Iranian economy.

Rob Malley, the president of the International Crisis Group, said Monday that Iran essentially has three options for striking back at the U.S. — threatening to escalate its nuclear program, preventing the transport of foreign oil shipments in its neighbourhood and targeting U.S. or U.S.-friendly forces in the region.

"And the most obvious place is in Iraq because of the co-location of some of the Shia militias that are close to Iran and U.S. forces," Malley, who was a top negotiator of the Iran nuclear deal for the Barack Obama White House, said on a conference call from Washington.

"They've already sent that signal. They haven't hit any Americans. They certainly have the capacity to do so."

Malley said such an attack would be a major escalation that would likely trigger a U.S. military response.

Bessma Momani, a University of Waterloo analyst of the Middle East, said Iran has used proxies in Iraq to hit a number of places where U.S. troops are based.

"But Iran is very careful to never do it themselves because they want to be able to have deniability. But of course our troops are at risk," Momani said Monday in an interview.

The nuclear deal — which was brokered among the five permanent members of the United Nations Security Council plus Germany — was designed to rein in Iran's ability to develop nuclear weapons, in return for greater relief from Western sanctions.

The deal's future remains uncertain. France, Britain, China, Russia and Germany remain in it. The U.S. has imposed more sanctions and launched a cyber attack on an Iranian militia group.

Iran has been accused of attacking oil tankers in the Gulf of Oman its Revolutionary Guard shot down an unmanned U.S. military drone in the region, which nearly led to the U.S. launching retaliatory air strikes before President Donald Trump called off the plan.

"It's important to look at this as a signalling attempt by the Iranians to basically get the Europeans to find some economic relief for them. The reality is they're hurting, the Iranian economy is suffering. The oil sanctions preventing them from selling on the international market is effectively working," said Momani.

But Momani said there is little leverage for European companies to provide relief because many are multinationals with interests in the U.S., which means the U.S. government can punish them.

China isn't in a strong position either, said Momani, because it has already felt U.S. wrath over Iran. The U.S. is seeking the extradition of Chinese tech executive Meng Wanzhou, who is accused of lying to American banks to circumvent Iran sanctions. Canada arrested Meng in Vancouver, leading to the imprisonment of two Canadian men and plunging Sino-Canadian relations to a new low.

"They (China) have their hands full already trying to comply with Iranian sanctions and Meng was just one — in their eyes — victim of that."

Wendy Sherman, who was also a top U.S. negotiator on the nuclear deal, said everything Iran is doing to move ahead on uranium enrichment can be reversed if it can win some economic relief.

"Iran is, I think, operating in a very careful way, both taking reversible steps as well as doing this in a step-by-step process to put pressure on Europe in particular and Russia and China to break with United States … to allow them to move and sell their oil," Sherman said on the conference call from Washington.

"This could spiral out of control quite quickly, depending upon U.S. actions," Sherman added. "We are at a very dangerous and difficult moment."