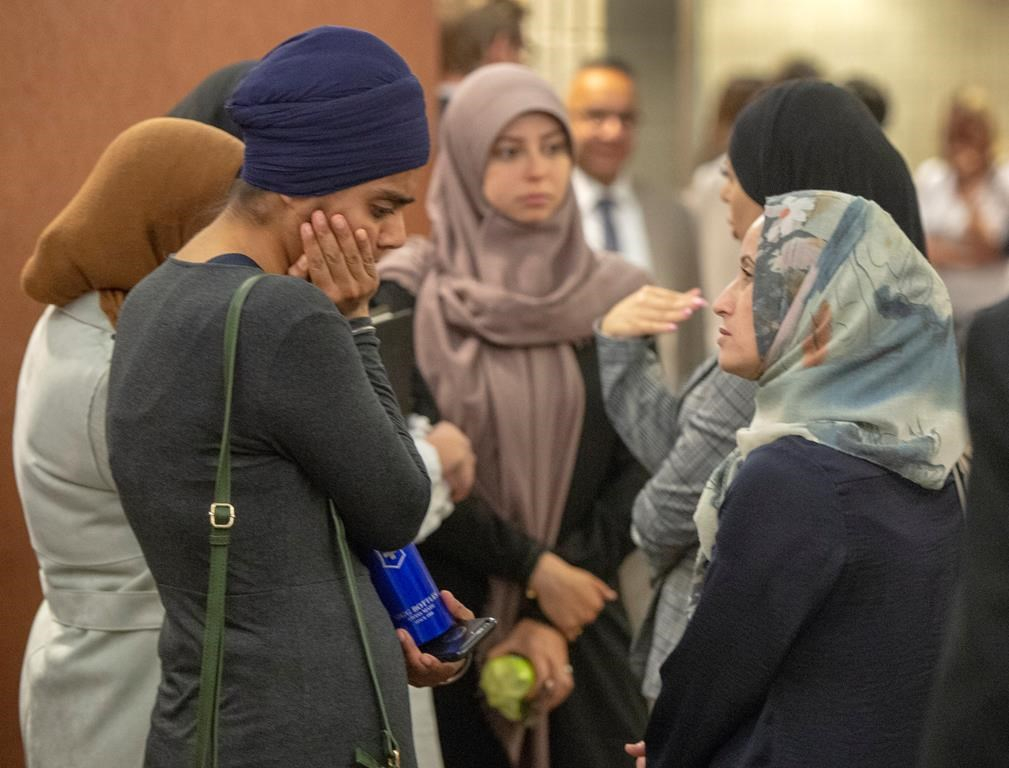 People wait to enter the courtroom for a hearing challenging Bill 21, Quebec's religious symbols law, on Tuesday, July 9, 2019 in Montreal. Photo by The Canadian Press/Ryan Remiorz
Previous story
Next story

As lawyers defended the Quebec government's secularism law from a constitutional challenge in a Montreal court Tuesday, the crucifix hanging over the province's legislative chamber in Quebec City was quietly removed.

The Coalition Avenir Quebec offered to move the cross as a goodwill gesture to all those against its new law, which bans some public sector workers — such as teachers, judges and police — from wearing religious symbols on the job.

Premier Francois Legault has been accused of hypocrisy for introducing the controversial law, known as Bill 21, while maintaining a religious symbol above the Speaker's chair in the legislature.

The crucifix will now be displayed in another part of the legislative building. But just as that debate drew to a close, another one was brewing.

In the Montreal court, lawyers representing a national Muslim organization, a civil liberties group and a university student who wears an Islamic head scarf asked a judge to put the main parts of Bill 21 on hold.

Quebec's secularism law is causing serious, immediate harm to religious minorities across the province and it must be stayed for the duration of the court challenge against it, attorney Catherine McKenzie said.

The irreparable harm caused by the law's application outweighs any negative consequences to Quebec society if it were put on hold for a couple of years pending a full judicial evaluation of the legislation, said McKenzie.

"There is zero evidence people wearing religious symbols are hurting anyone," she told Superior Court Justice Michel Yergeau. "What we are asking for is the maintenance of the status quo."

When it was the government's turn to present arguments, Yergeau asked attorney Eric Cantin about all the students in teaching programs who found themselves barred from applying for jobs because they wear religious symbols.

"What is a judge supposed to do with that?" Yergeau asked.

Cantin replied, "Well, it's not easy." The lawyer added that any harm caused by the law would be "temporary."

People who work in the public sector — such as bureaucrats — have limits with regards to the kinds of political activities they can engage in, he said. Other public workers have uniforms, he added.

"When someone chooses to work in the public sector, they accept that they will have constraints," he said. "The law doesn't prevent minorities from being hired. It doesn't prevent religious practice."

But Olga Redko, another lawyer challenging Bill 21, told Yergeau that religious people don't just leave their religion at the door. Religion is an intrinsic part of peoples' identities, she said.

A judge might eventually rule that Bill 21 is constitutional, McKenzie said. But until then, she asked Yergeau to issue the stay so religious minorities can continue seeking employment.

Bill 21 invokes the notwithstanding clause of the Canadian Constitution, which prevents citizens from challenging the law for violating fundamental rights and liberties protected by the Canadian Charter of Rights and Freedoms.

McKenzie and Redko are challenging Bill 21 on three grounds rooted outside the charter.

Redko said Bill 21 is unconstitutional because it attempts to legislate the relationship between religion and the state, which she argued is the sole purview of the federal government.

Second, she said Bill 21 is impermissibly vague because it fails to clearly identify how it would be applied and enforced.

Lastly, Redko argued the law violates the structure of the federal system by prohibiting people from participating in public institutions. The protection of minority rights has been built into the structure of Canadian Confederation, she said.

Stephanie Roberts, another lawyer for the Quebec government, rejected the idea that Bill 21 was outside the purview of the province. The main thrust of Bill 21 is to affirm the secular nature of the Quebec state, she said. Any part of the law that might touch on federal jurisdiction is "accessory."

"The dominant characteristics of the law is to affirm the laicity of the state," Roberts said. "The law is squarely within provincial jurisdiction."

Judge Yergeau said he would try and rule on whether or not to issue a stay by July 19.