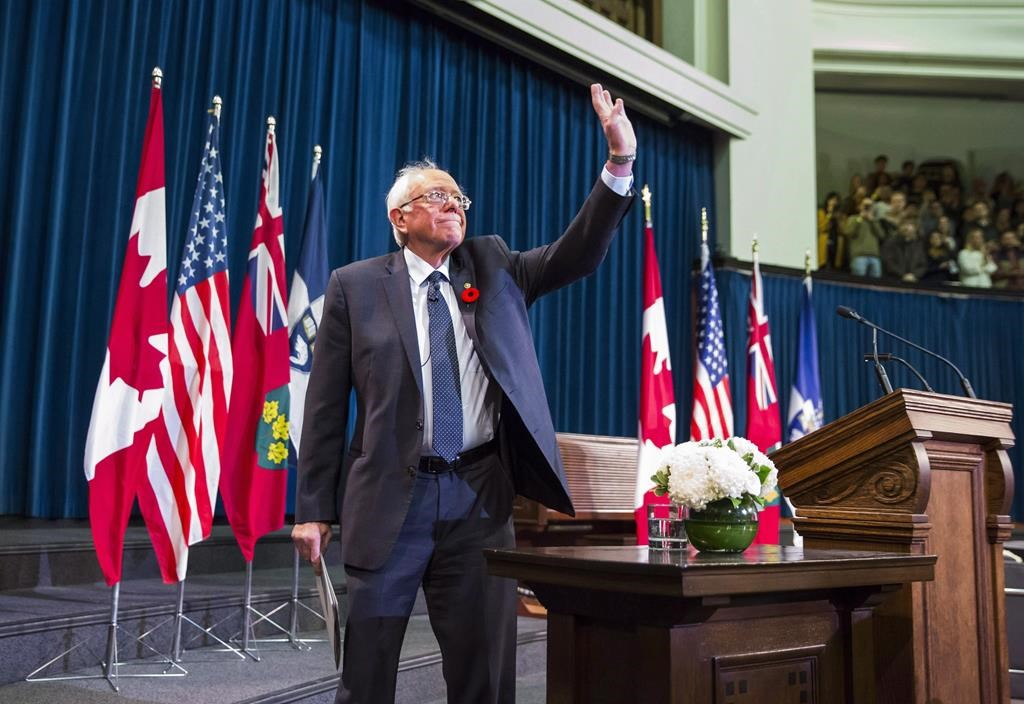 United States Senator Bernie Sanders waves before speaking at the University of Toronto during an event called "What the U.S. Can Learn from Canadian Health Care," in Toronto, on October 29, 2017. File photo by The Canadian Press/Mark Blinch
Previous story
Next story

American presidential hopeful Bernie Sanders said on Thursday that he would soon be coming to Canada with a group of diabetics to buy cheaper insulin.

The Vermont senator said in a tweet that he planned to make the trip toward the end of this month.

Typically, a vial of insulin Type 1 diabetics need to regulate their blood sugar costs about US$340 in the United States, roughly 10 times the price in Canada.

Sanders, who has long targeted pharmaceutical companies for the cost of prescription drugs, made a similar medication trip to Canada in 1999. He has accused the industry of being antithetical to the interests of the American public.

"In 1999, I took working-class women, struggling with breast cancer, to Canada to buy the same medication for 1/10th of the price they were paying in the U.S.," Sanders tweeted.

The Democratic presidential candidate's campaign did not immediately respond to a request to discuss the trip.

According to CNN, Sanders and the diabetics will make the trip as part of his efforts to highlight the hardships some Americans face when it comes to drug purchases. The plan is to head to Windsor, Ont., from Detroit.

Late last month, a group of Type 1 diabetics from Minnesota crossed the border to buy insulin in London, Ont. One of the organizers, Quinn Nystrom, who was making her second such expedition, said insulin prices south of the border have skyrocketed in two decades.

"One in four Americans are rationing their insulin because they cannot afford it, so people are dying," Nystrom, 33, said in a recent interview.

Current rules allow Americans to take home a maximum three-month personal supply of medicines bought in Canada, and four states — Florida among them — have passed legislation allowing for wholesale or individual imports of medications. Because insulin is non-prescription in Canada, there is no tracking mechanism of how much might be heading south.

Although still relatively small-scale, the drug tourism has sparked concerns in Canada.

Barry Power, a senior director with the Canadian Pharmacists Association, has warned of potential disruption if large numbers of Americans flood the Canadian market and called on the Canadian government to look at the issue. A spokeswoman for the federal health minister said the government was monitoring the situation.

Canada, in line with other industrialized countries, regulates drug prices through the quasi-judicial patented medicine prices review board whose mandate is to prevent gouging. Market forces operate in the U.S.

In an interview with CNN on Thursday, Sanders attributed the rising cost of drugs in the United States and the disparity with prices in Canada to the difference between the health-care systems in the two countries.

"Canada has a nationalized, single-payer system that allows them to negotiate much better prices with the drug companies," Sanders said. "In our country it is a much different story."