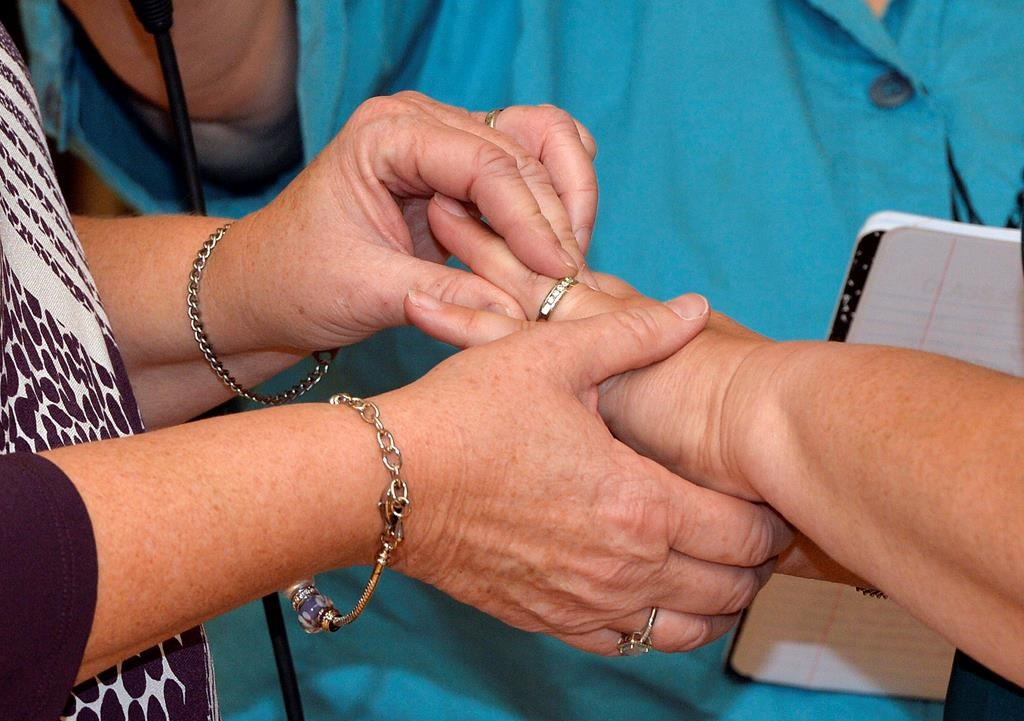 Two women place wedding bands on the finger of their partner as they renew their vows in a public ceremony on Oct. 24, 2015, in Morehead, Ky. File photo by The Canadian Press/Timothy D. Easley
Previous story
Next story

The Anglican Church of Canada narrowly voted down a proposal to bless same-sex marriage across the denomination, with its newly elected leader acknowledging the disappointment the decision would bring for many.

Branches of the church in each province will still be able to make up their own minds on same-sex unions, but the motion that failed would have allowed for a definite church-wide acceptance of such marriages.

"The failure of the motion to change the marriage canon will be deeply painful for LGBTQ2+ members of our Church and for those beyond the Church who looked to this step as a sign of hope and inclusion," Rev. Linda Nicholls, the first woman chosen to lead the church, wrote in a Facebook post.

Delegates rejected a motion on Friday to add same-sex unions to national church laws at the General Synod — a meeting held every three years to decide issues of policy and doctrine.

To pass, the resolution required "yes" votes from two-thirds of each of three orders — lay, clergy and bishops. Eighty per cent of the lay delegates voted to adopt the motion, as did 73 per cent of the clergy. But the bishops were two votes shy of what was needed to enter the proposal into law.

The Church doesn't prohibit same-sex marriage outright and in 2016 declared that leadership at the provincial level could decide whether to allow it within their jurisdictions. Friday's motion, if it had passed, would have formalized the church's position in its laws.

Nicholls said that when the decision came down, the only sound in the room was the sobbing of a member of the LGBTQ+ youth delegation.

"That sound will resound in the hearts of all those present as a moment not only of personal mourning but of the mourning of a church that was unable to find a way to live with differences despite the best efforts of many people," she wrote.

In her post, Nicholls wrote that the Huron Diocese in southwestern Ontario, where she was previously bishop, will continue to bless "civil same-sex marriage, recognizing the intention to live in fidelity, mutual love and comfort in a lifelong union."

Other members of the church also expressed their displeasure at the outcome of Friday's vote.

Toronto Bishop Andrew Asbil wrote on Facebook that he shared the LGBTQ community's grief over the failed resolution, which he said came in spite of "decades of ongoing discussion, prayer and the courageous sharing of experience from the LGBTQ+ community."

"I had hoped that our Church was in a different place and would arrive at a different decision," he wrote. "I assure all of our LGBTQ+ siblings – beloved children of God – of my love and support. I know that it is tempting in this hour to lose heart."

Asbil also asked the Anglicans who were relieved by the decision to be gracious in their victory.

The Anglican Church of Canada has been mulling whether to add same-sex marriage to its Marriage Canon for years.

Its leadership requested that a motion to amend the denomination's position on the issue be prepared in 2013. That resolution, approving same-sex marriages, passed in 2016 but needed a successful second reading at the next synod to be entered into the church's laws. That second reading failed Friday.

About 1.6 million Canadians identify themselves as Anglican, according to the most recent data from Statistics Canada.