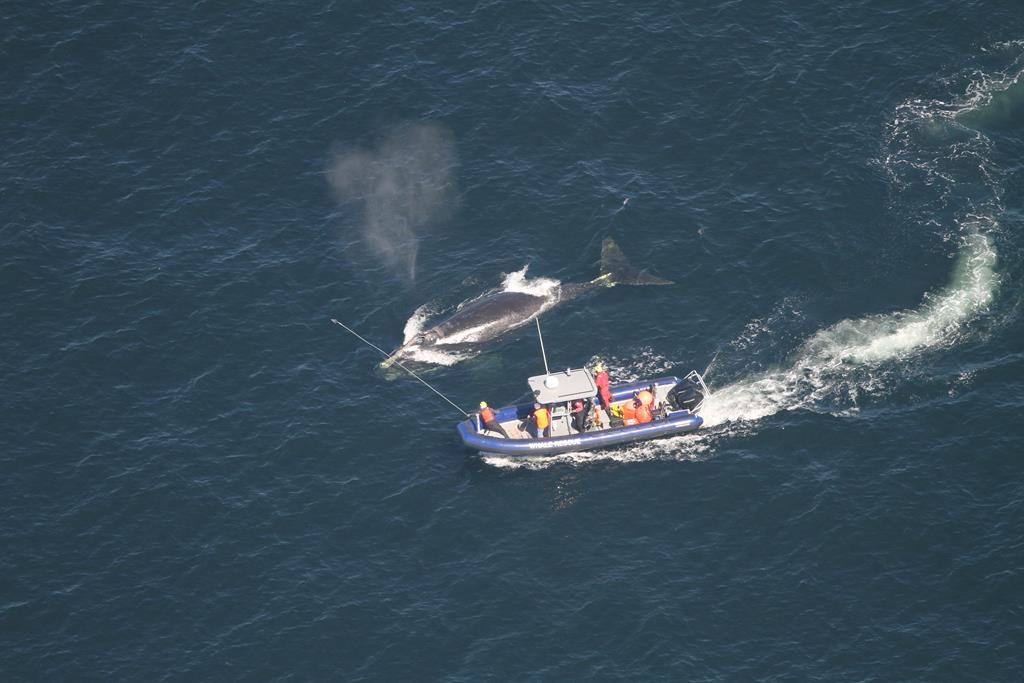 Crew members attempt to disentangle a whale in the Gulf of St. Lawrence in a handout photo. Handout photo by Alison Ogilvie/NOAA Fisheries
Previous story
Next story

Two more dead North Atlantic right whales have been spotted off the east coast, bringing to eight the number of the endangered whales to die this year in Canadian waters, federal officials said Friday.

One of the dead whales was first observed Thursday by an aerial surveillance flight drifting west of the Magdalen Islands in the Gulf of St. Lawrence, the Department of Fisheries and Oceans said in a news release.

It was located Friday by a vessel in the area, and a necropsy is scheduled to take place Sunday.

Also Friday, the body of a second dead right whale was sighted off Glace Bay, N.S., according to the fisheries department.

The whale was originally reported on June 24, 2019 by a fisherman, but fisheries vessels could not find it to confirm it was in fact a North Atlantic right whale.

The exact date, location, and cause of the whales' deaths is not known. It is believed the population of the endangered species currently stands at around 400 animals.

"Neither of these whales have yet been individually identified," the department said in a news release, adding that the government "takes this issue very seriously."

The statement said federal officials have "spent over 1,150 hours in the air monitoring North Atlantic right whales in Atlantic Canada since April — with five or more aircraft flying over the waters of Atlantic Canada on any given day in search for whales."

Necropsies have confirmed that three of the previous right whale deaths this year were due to vessel strikes.

Scientists and environmental activists say North Atlantic right whales are under high levels of stress because they often come into contact with ships or get entangled in fishing gear.

Earlier this month, the Department of Fisheries and Oceans dispatched rescuers to try and free three North Atlantic right whales that were entangled in the Gulf of St. Lawrence, off Miscou Island, New Brunswick. That operation continued this week.

No right whales died in Canadian waters last year, but 12 were found dead in the Gulf of St. Lawrence in 2017.

Hard to miss dead right whales - like it is hard to miss slaughtered elephants. Being too big is an obvious hazard for wildlife. Too easy a target. Humans also seem to be easy targets for this human species with murder/lethal carelessness encoded in its genes.