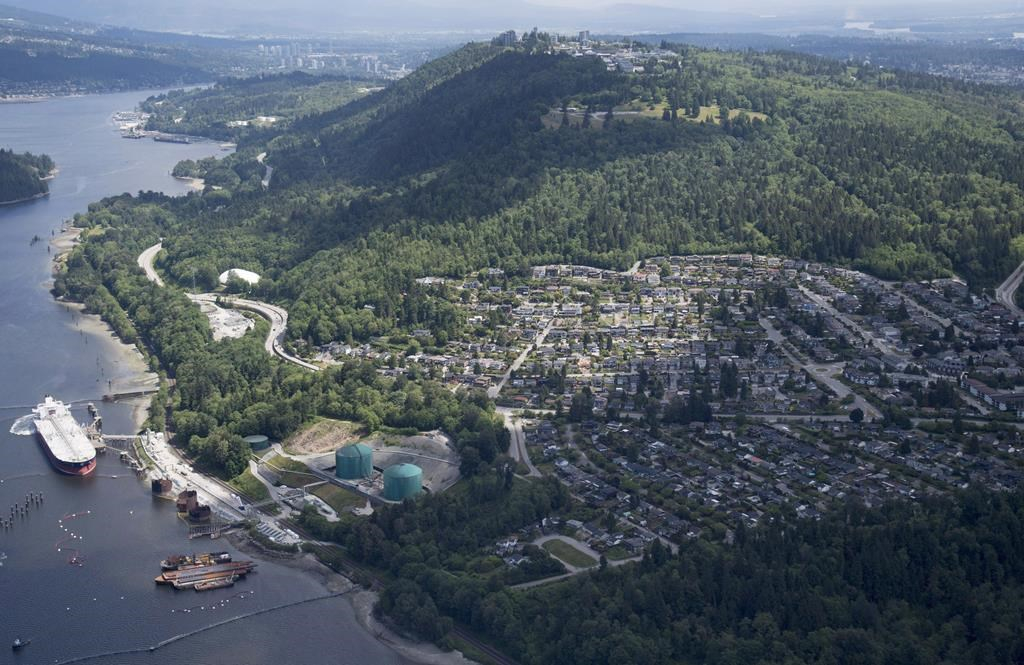 A aerial view of Kinder Morgan's Trans Mountain marine terminal, in Burnaby, B.C., is shown on May 29, 2018. File photo by The Canadian Press/Jonathan Hayward
Previous story

The National Energy Board says its decisions and orders regarding the Trans Mountain pipeline expansion issued prior to last summer when a court overturned its approval will remain valid except where circumstances have changed.

The decision is in line with a request from the federal government-owned pipeline to restore its regulatory status in order for construction to resume during this building season.

Trans Mountain says it is reviewing the details of Friday's decision and will decide on processes and a construction schedule in the coming weeks.

The NEB, which invited comment on the issue from June 21 to July 9, says it may review any of its decisions or orders on its own, due to new information from Trans Mountain or in response to an application for review.

It says Trans Mountain must issue notices to landowners along the entire route, including those that were served previously, and publish notices in local newspapers.

The NEB says it will notify potentially affected Indigenous peoples of the detailed route approval process, adding those who have route concerns may file a statement of opposition requesting a review.

Before the Federal Court of Appeal decision last August, the NEB had approved more than 73 per cent of the detailed route and found that 64 of 98 pre-construction conditions had been fully satisfied, allowing Trans Mountain to start construction at the Westridge Marine Terminal and on certain temporary infrastructure sites and portions of the pipeline route.

The NEB reapproved the project in February after considering impacts on marine life and Ottawa gave final approval June 18 after completing consultations with Indigenous groups.

It is an insult to pigs to

It is an insult to pigs to call the entire TMX folly, the governments supporting it, the lobbyists frantically promoting it, the lethally lazy and incompetent "regulators" enabling it - pig headed. So I won't. Instead I will call them all co-conspirators in an epic, futile, vain glorious, fatally stupid and corrupted financial, industrial, political boondoggle that will go down in Canadian history as the ne plus ultra infamy.

We need a thorough

We need a thorough transparent analysis of the financial case for building this pipeline. People should demand this from their Members of Parliament. I doubt that the case can be made.

Any truly responsible Corporation (ownership) setting out to invest 20 billion or so dollars would have done a considerable amount of market research which would justify this decision. This protects the shareholders, providing hard evidence that markets and future markets will not only recover the original investment but provide profit in line with the original investment. I have seen nothing like this. This is a political decision that will prove to be not only immeasurably destructive and costly but irresponsible and reckless. In this case the taxpayers are the shareholders and deserve responsible reporting regarding the BUSINESS decision making that has been taken in this undertaking. Where is the evidence and I do not refer to word claims coming from the people in the industry today? We (owners) need real evidence that this is a good business decision.