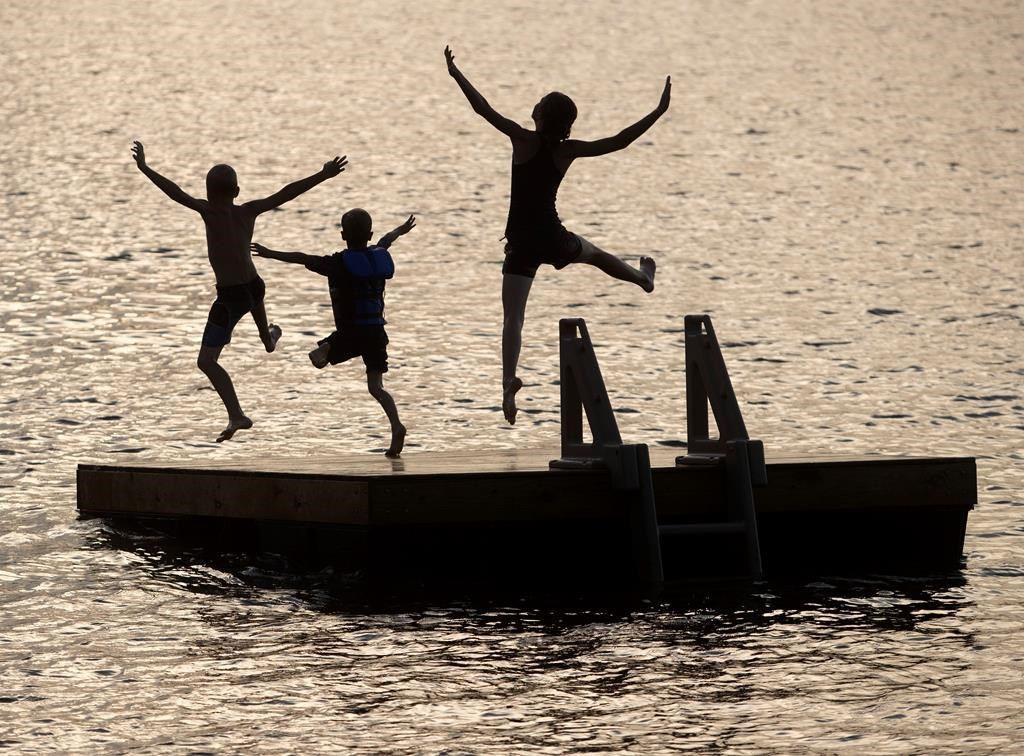 Kids jump off a floating dock on Pigeon Lake near Bobcaygeon, Ont., on Friday, July 19, 2019. File photo by The Canadian Press/Fred Thornhill
Previous story
Next story

Relief is in sight for sweltering Canadians after a weekend of high humidity and thunderstorms that affected sporting events, caused localized flooding, and sent people flocking to local pools to beat the heat as temperatures soared into the mid-30s.

Environment Canada meteorologist Catherine Brabant said that while parts of southern Quebec, Ontario and the Maritimes remained under heat warnings early Sunday afternoon, temperatures were expected to drop to seasonal levels by evening and remain there for the coming days.

"We'll get back to more seasonal temperatures, and much less humidity, so much more comfortable," Brabant said in a phone interview.

In Toronto, residents braved long lineups to cool down in one of the city's pools on Saturday as temperatures reached 34 C, while Woodbine racetrack announced it was taking extra measures to protect the horses racing, including extra veterinarians, mobile cooling stations and shorter post parade times.

"I've been to places all over the world, but this is starting to resemble more like Bangkok than somewhere in Canada," the Toronto resident said.

Gilles Desgagnes, a spokesman for Quebec civil security, said there were reports that a brief but intense rainstorm in parts of Montreal on Sunday morning caused headaches for a few motorists, who found themselves trapped by the water that rapidly accumulated under some underpasses and on a stretch of Highway 40.

Desgagnes said that the water accumulation may have been caused by clogged sewers and drainage systems, but that the problem appeared limited to a few isolated areas and was quickly resolved.

The weather was also a big factor in Saturday's Montreal Alouettes game as halftime was extended to 20 minutes for the players' safety since humidex values reached 41 C. The game was also suspended for 25 minutes due to lightning in the area.

But while the heat may have felt stifling, a spokeswoman for the local health department said that as of Sunday afternoon there had been no increase in hospitalizations in Montreal, and that no deaths had been directly linked to the heat.

In comparison, the city's public health authority reported that 66 people, most of them seniors or chronically ill, died as a result of extreme heat on the Island of Montreal between June 30 and July 8 last year.

Brabant said the vastly different outcome is because last year's heat wave lasted several days longer, and the effects of high temperatures build up in the body over time.

Saturday marked the warmest day of the season in Ottawa, with the temperature hitting 46 C with the humidex in the afternoon. Ottawa Public Health urged residents to check on family, friends and neighbours who may vulnerable to the heat.

But Sunday provided some relief, with the forecast sitting at 29 C, or 34 C with the humidex, with a chance of rain.

Brabant said humidity makes it harder for the human body to cool itself.

"When we sweat, and the sweat evaporates, this is how we cool off," she said. When it's humid, "the sweat doesn't evaporate, it stays on the skin."

In much of Alberta, where the summer of 2019 has so far been mostly a mixture of rain and below-normal temperatures, conditions returned closer to seasonal on the weekend.

Environment Canada issued heat warnings for the province's north, as well as northwestern Saskatchewan and southern regions of the Northwest Territories, where temperatures are expected reach 30 C for much of this week.

In the northern Alberta community of High Level, firefighters continue to battle a massive blaze that forced thousands of people from their homes for several weeks in the spring. The province said Sunday that the hot, dry conditions mean "extreme fire behaviour is expected to continue for the next several days."

But the drier weather is likely more welcome in Edmonton, where days of rain last week are being blamed for overwhelming a sewer line in the city's north, causing stinky sewage to back up into about 20 homes in one neighbourhood.

— With files from Rob Drinkwater in Edmonton, Lidia Abraha in Toronto and Kristy Kirkup in Ottawa