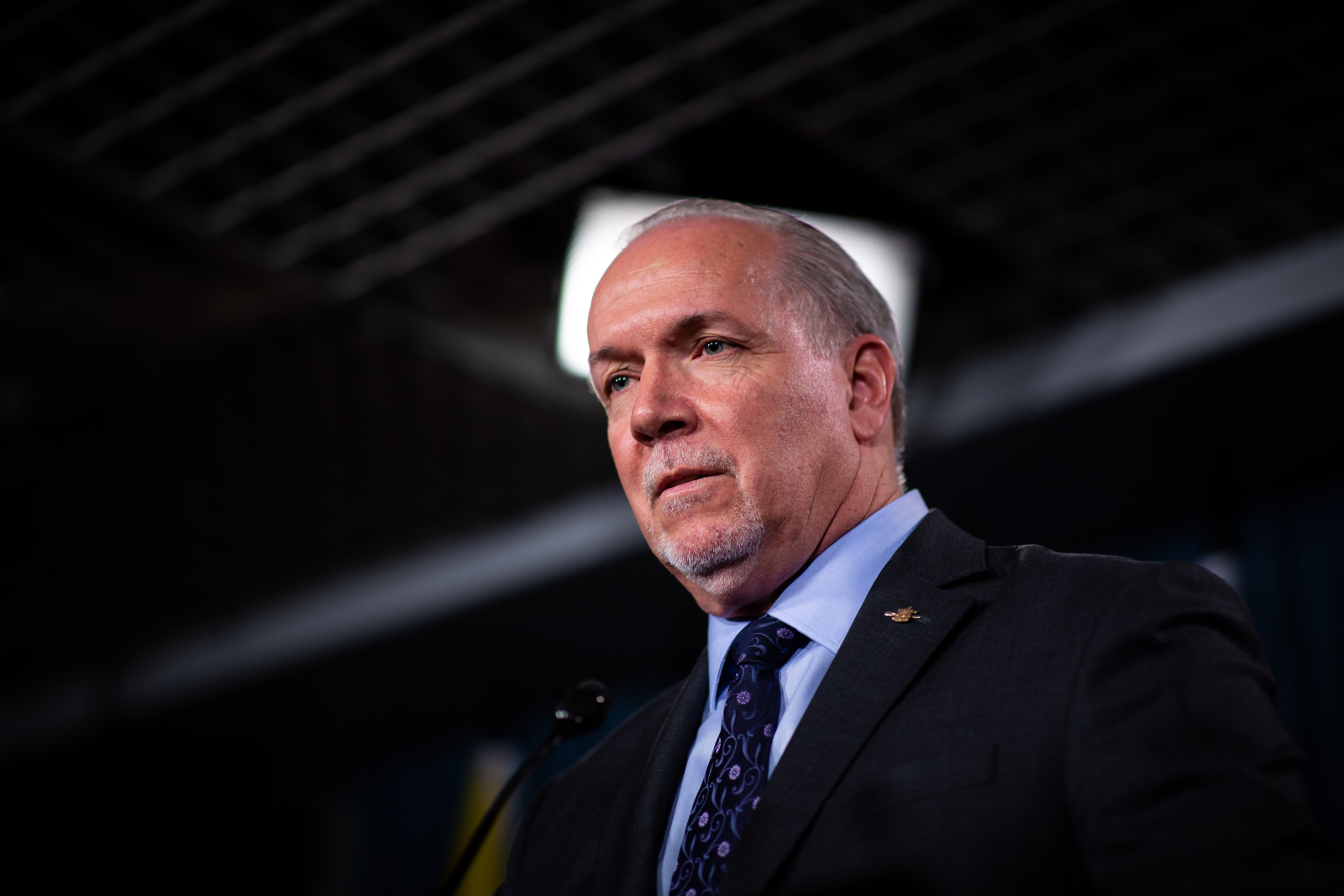 Horgan was on site Wednesday at the Big Bar landslide that was discovered last month northwest of Kamloops, where crews are working to help salmon pass a five-metre waterfall blocking their path to spawning grounds upstream.

Officials are exploring everything from transporting salmon by helicopter to shooting them over the waterfall using a fish cannon to avoid possible devastating effects to the populations.

The premier visited the incident command post in Lillooet, accompanying officials on a helicopter tour of the slide site and helping tag a few fish for monitoring during his visit.

In a phone interview, Horgan says the situation has the potential to be an ecological disaster but he says crews are showing a level of optimism and co-operation that is rarely seen in disaster situations.

Horgan attributed part of that teamwork to the relationships that were built in 2017 and 2018, when wildfires scorched enormous areas of the province and required co-ordination between federal, provincial, local and Indigenous governments.

"We are at a good place right now but we have to always be cautious. And the consequences of three to four million sockeye not making it to their spawning grounds are going to be significant four years out, so we want to make sure we're doing everything we can to get those fish home," Horgan said.

Al Magnan, environmental unit lead for the unified command incident management team, described the slide as a "significant" ecological event, because chinook, sockeye, pink and coho populations all rely on the Fraser River to make their runs.

"It's creating a partial barrier in the river that was never there before, so it's quite significant in terms of the effects on migration and ability of fish to spawn," he said.

The chinook run is underway and the sockeye run has begun, but the bulk of the migration is expected to occur in the coming weeks. Some good news is coming from the test fisheries, however, which suggest returns will be late this year.

"We're not seeing too many fish at the mouth of the river yet so that could be a positive for us, in terms of the timing of the migration," Magnan said.

Crews from the provincial and federal governments are working around the clock with members of local communities and Indigenous groups to clear the way for the fish and come up with alternative ways to move them, he said.

Since June, crews have focused on stabilizing the slide site, restoring an open passage in the river for migrating fish and ensuring that fish can move freely upstream to their spawning rounds, the province says in a news release.

The situation is complex because of the rockslide's remote location with steep canyon walls and turbulent, swift-moving water.

Rock scaling work to remove loose stones from the cliff is expected to wrap up in the coming days, making it safer for crews to work in the waters below.

Crews are also working to tag between 500 and 1,000 fish with radio transmitters and their health will be monitored but data is not yet available, Magnan said.

While helicopters have been successfully tested to move a small number of fish above the slide site, it's not a practical way of moving millions of fish, the province says.

Other strategies being pursued include moving rock to create a natural fish ladders and constructing aluminum fish ladders to assist fish with their passages. A fish wheel, which is a water-powered device for catching fish, is scheduled to be installed and operational by July 30.

Horgan brought up the plight of the salmon during his bilateral talks with Prime Minister Justin Trudeau in Victoria last week and said Trudeau assured him that the Department of Fisheries and Oceans would make available any resources that are necessary.

A First Nations leadership panel has also been convened to give input on critical decisions.

"The public has an expectation that happens all the time, sadly it doesn't. But in this case, thank goodness it's happening," Horgan said.

Horgan said he believes the "glue" bringing people to work together is a shared passion for salmon.

"They're so iconic to British Columbia, so critical to all of us -- our forests, our animals, our Indigenous communities as well as recreational fishers, commercial fishers and people who just like to come and watch the salmon spawn. It's part and parcel what it is to be a British Columbian."

I'm surprised they haven't considered speaking to a talented demolition source who has an idea of what is possible here without disturbing the hillside any more.
They are assuming they know the answers to this dilemna in a very narrrowminded way.