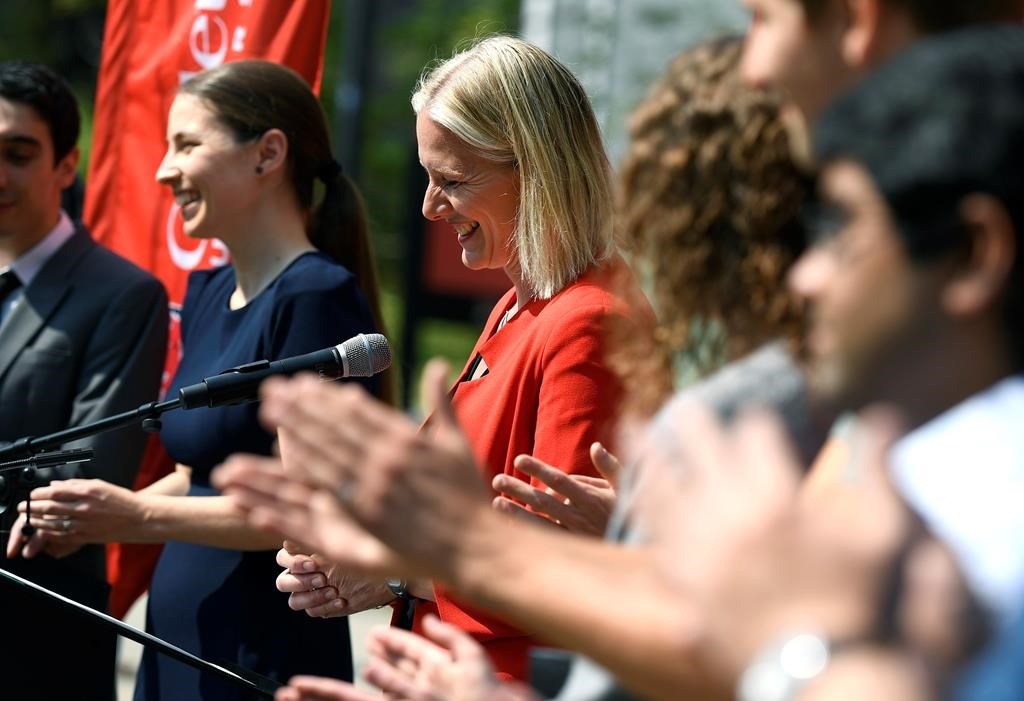 Catherine McKenna is surrounded by Carleton University faculty and students during a funding announcement for two energy efficient building research projects at the university, in Ottawa on Friday, July 26, 2019. File photo by The Canadian Press
Previous story
Next story

Some of North America's top conservation scientists have written to the federal government urging it to speed up land protection in Canada.

The 32 scientists from 23 universities and other organizations say Ottawa is not on pace to meet the 2020 conservation targets it promised in an international agreement. The letter, addressed to federal Environment Minister Catherine McKenna, also warns the government not to include in its totals land that's protected by provincial regulations or informal agreements instead of actual legislation.

"The natural world is telling us through all the indicators that we need to speed up the rate of protection if we're going to have any chance of slowing and stopping this decline," said Jeff Wells of the Audubon Society, who signed the letter and speaks for his colleagues.

Canada has promised to conserve 17 per cent of its lands and water by 2020 under the Convention on Biological Diversity, an international treaty ratified by all UN members except the U.S. Just months before the deadline, Canada stands at 11.2 per cent.

The letter encourages the government to turn to First Nations for help. It says so-called Indigenous protected areas — land set aside from development and managed by local First Nations — are the fastest way forward.

"With a large country like Canada, that means you have to have some very large protected areas," Wells said. "The federal government has made some of the biggest investments in history trying to move forward, but it's still going to take some very big landscapes to reach that goal.

"As far as we could see, the only way to do that is support the Indigenous proposals for protected areas."

Ontario's Moose Creek First Nation has been trying for years to protect 5,000 square kilometres in the North French River watershed. Yukon First Nations would like to do the same with the Peel River region.

Several British Columbia bands have already established protected areas under their own laws that have yet to be recognized by the province or Ottawa.

"Every province has a whole set of Indigenous proposals for protected areas of different sorts," Wells said. "There's a huge number of them and they're the only way you could ever get close to that 17 per cent goal."

The letter warns that scientists will be watching to ensure the protected lands that get counted toward the goal are actually protected.

It's the provinces that list conserved areas and report them to Ottawa. Wells said some have tried to include lands that aren't protected by legislation, but only by a regulation or an agreement with a resource company.

"The truth is they could be changed with a change in the ownership of a company or a provincial government," said Wells. "They're not things that are set in stone the way protected areas are."

It's not clear how Ottawa will assess the inventories provided by the provinces, he said.

"There could be an attempt to squeeze some things in there that aren't completely appropriate."