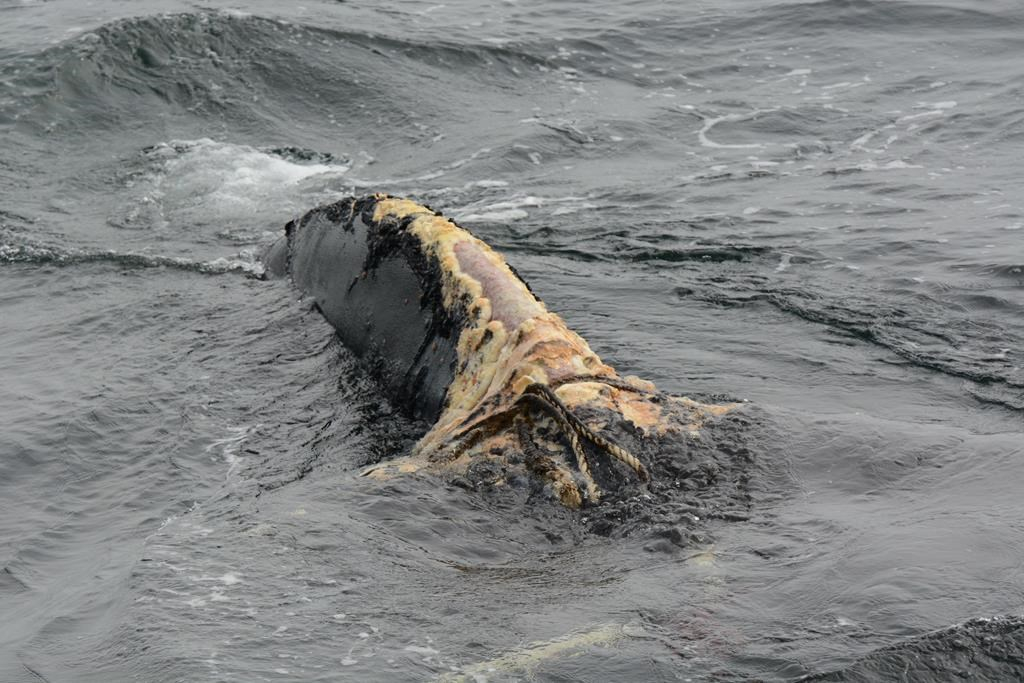 A tail of an entangled North Atlantic right whale is seen in this undated handout photo in the Gulf of St. Lawrence. Handout photo by ACCOL/NEAQ and Canadian Whale Institute
Previous story

A recent scientific trip in the Gulf of St. Lawrence made multiple sightings of endangered North Atlantic right whales, including four of the seven calves born last winter.

Amy Knowlton, a leading right whale research scientist with the New England Aquarium in Boston, calls the sightings of the young whales encouraging news during a season in the gulf in which eight right whales have died.

"It's very encouraging to see them and to know that they've transited to that area safely. Mothers are very good and take good care of their calves and keep them close, so it was very good to see," Knowlton said Friday in an interview from a research station in Lubec, Maine.

Knowlton said this particular group of young had initially given scientists hope for the right whale population, which currently stands at an estimated 400 worldwide.

With no births in 2018, Knowlton said the births last winter of seven whales in calving grounds off Florida and Georgia was "a step in the right direction." She said that's why the recent whale deaths in the Gulf have been so disheartening, after no deaths reported last year.

"This population ideally would have a lot more calves per year," she said. "The potential is there for them to have more ... we have to find ways to address the threats they face so that the females can begin to thrive again."

Knowlton said the calves appear to be doing as they nurse at their mother's side and learn to feed on the zooplankton known as copepods, which is the whales' main food source.

She said when born, the whales are 3.5 metres to just over four metres long. The calves observed in the gulf are about 7.6 metres long.

The 15-day research trip in the southern gulf made 199 whale sightings in all, and documented at least 70 individual whales who are identified by distinctive markings at the top of their head.

Knowlton said the idea was to get an up close view to determine their health and to find external evidence of brushes with vessels or fishing gear. Three of the whales spotted were entangled in fishing lines, she said.

"Once you know where they are, they are pretty easy to approach to get photographs of," she said. "For the most part they are just sort of doing their own thing."

Knowlton said unlike some whale species, such as humpbacks, right whales are rarely curious about boats.

However, she said that also makes them more difficult to rescue when they do get entangled, unlike humpbacks, which are more docile and have been known to simply rest when rescuers are trying to free them from fishing gear.

"Right whales are just not as happy about you trying to do anything about the rope on them, and because they are so powerful they will just try to avoid you and take off," she said. "So they are very different kinds of whales in that respect."

Knowlton said another encouraging sign during the research trip was the observation of limited vessel activity and the sighting of only a few sets of lost or "ghost" fishing gear where the whales were feeding in the area south of the Gulf's major shipping lanes.

Knowlton said it's as if the whales had been given a "little break."

Knowlton said steps taken last year, such as lowering vessel speeds and altering fishing seasons in the gulf, were thought to have been successful.

"This year, that clearly did not hold true, so more has to be done to understand what happened and what additional measures can be put in place," she said.

By Michael MacDonald in News, Politics | July 23rd 2019
State Of The Animal

By The Canadian Press in News, Politics | July 21st 2019
State Of The Animal