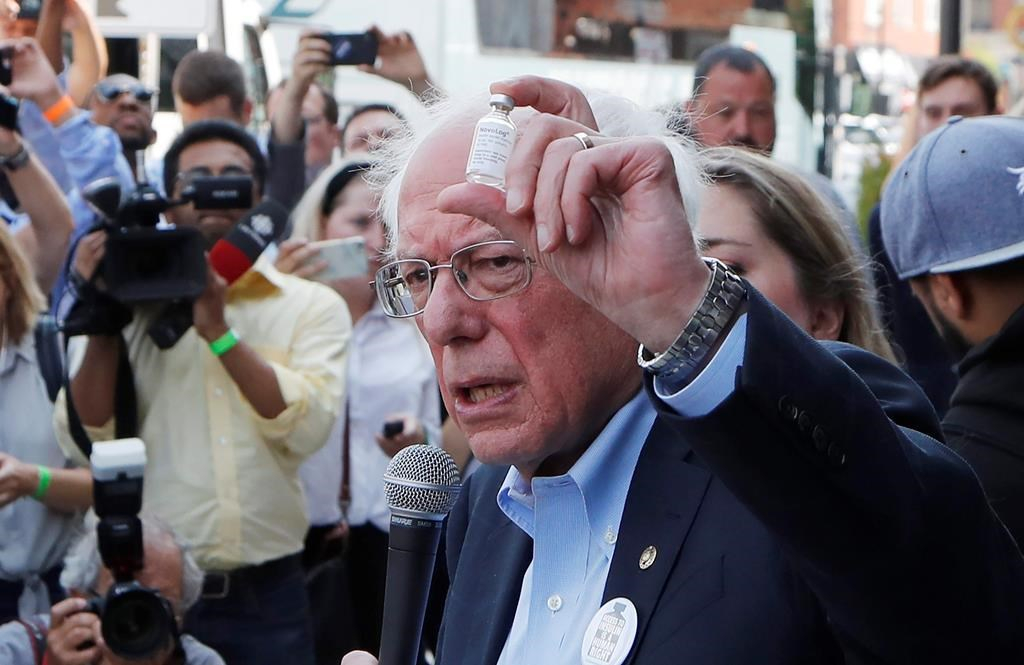 U.S. presidential hopeful Bernie Sanders said it's an "embarrassment" that Americans have to travel to Canada to buy cheaper medicine, pointing once again to Canada's health-care system as a model for his country to emulate as he joined a group of diabetics on a trip to Ontario on Sunday.

The Vermont senator, who is among the nearly two-dozen contendors vying for the Democratic presidential nomination, was in Windsor, Ont., with a group of American diabetics looking to buy insulin at a lower cost.

"It is an embarrassment for those of us who are Americans," Sanders told reporters outside a pharmacy. "We love our Canadian neighbours and we thank them so much, but we shouldn't have to come to Canada."

Typically, a vial of the insulin Type 1 diabetics need to regulate their blood sugar costs about $340 in the United States — roughly 10 times the price in Canada.

Sanders pointed the finger at major pharmaceutical companies and a lack of government oversight on drug pricing.

"We will do also what the Canadians do — they look around the world and they see what other countries are paying for various types of prescription drugs, and that is what they charge here in Canada," he said, noting that Americans must also emulate Canadians by regulating prescription drug prices.

Sanders posted on Twitter over the weekend that the high cost for insulin has put the lives of American diabetics at risk.

He has long been an advocate for more affordable medicine, having made a similar trip to Canada to purchase pharmaceuticals in 1999.

"As Americans, what we have got to ask ourselves is how come the same exact medicine — in this case insulin — is sold here in Canada for one tenth of the price that it is sold in the United States?" Sanders said in Windsor.

The socialist senator also has a history of talking up Canada's universal health care, telling an audience at the University of Toronto that this country sets a "strong example" for Americans during a 2017 visit.

That year, he introduced a failing bill in Congress to bring universal health care to the U.S., and he's made the topic a cornerstone of his second presidential bid.

On Friday, 15 groups representing patients, health professionals, hospitals, and pharmacists sounded the alarm about so-called pharmaceutical tourists in a letter to Health Minister Ginette Petitpas Taylor, saying a growth in the trend could spell trouble.

"The Canadian medicine supply is not sufficient to support both Canadian and U.S. consumers," the letter states. "The supply simply does not, and will not, exist within Canada to meet such demands."

A spokesman for Petitpas Taylor said in an email Friday the government opposes any initiatives that could adversely affect the supply or cost of prescription drugs.

"We continue our work to lower drug prices for Canadians and ensure they have uninterrupted access to the prescription drugs they need," Thierry Belair said.

Because insulin is non-prescription in Canada, there is no way to track how much of the drug might be heading south.