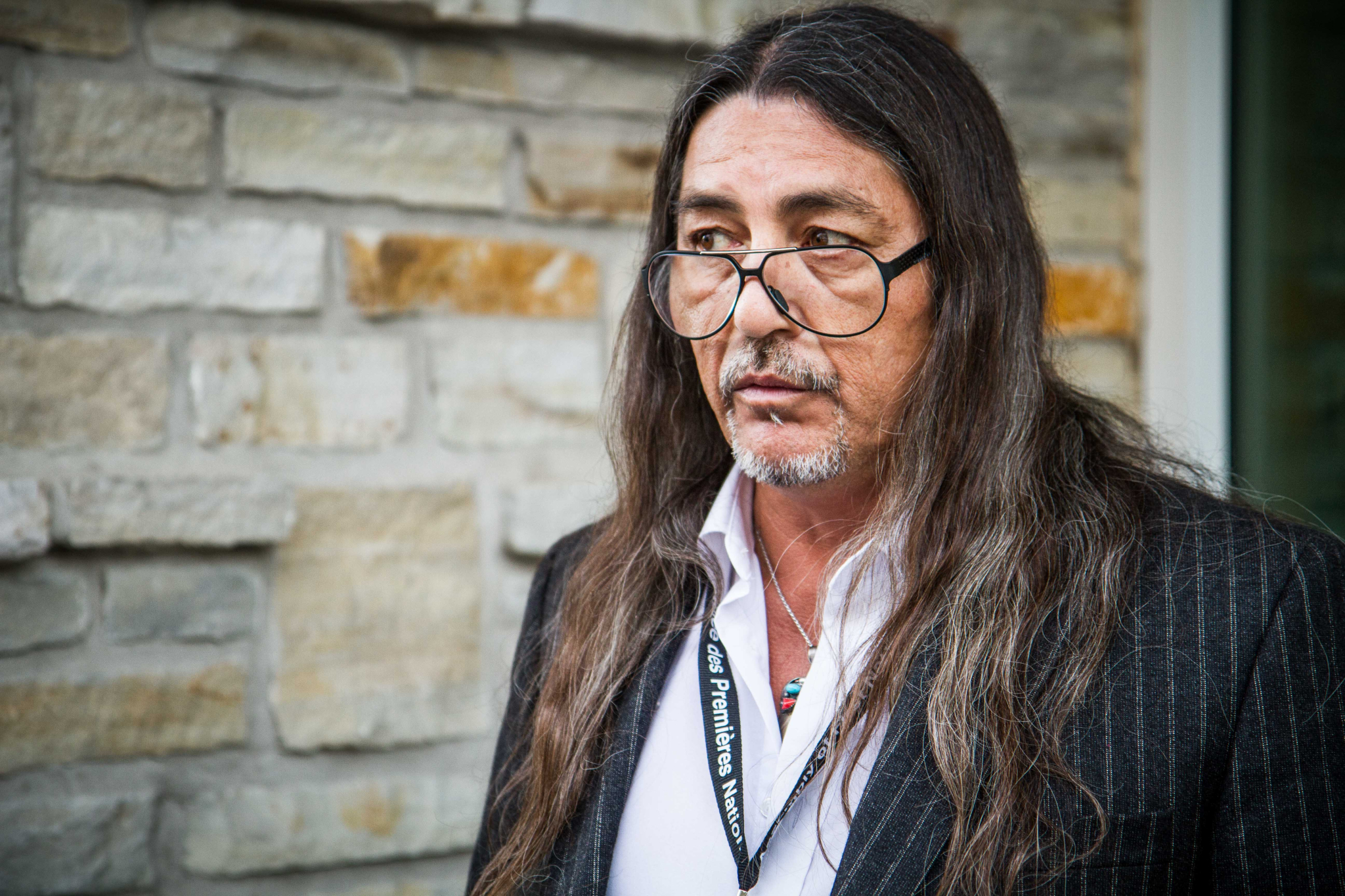 Kanesatake Grand Chief Serge Simon wonders if his community has reached "a tipping point". Simon appears in this photo taken during an interview in Gatineau, Que. on Dec. 6, 2016. File photo by Alex Tétreault
Previous story
Next story

The water is so bad on the Mohawk First Nation territory, he explained, that some people are forced to treat their own water at home with salts. The process is time-consuming, costly and labour intensive, he said.

There is finally a proposal on the table that would see an historic partnership between the city of Oka and the Mohawks of Kanesatake to bring clean water to the First Nation, which is about 60 kilometres west of Montreal. But rising tensions over a housing development are threatening to derail plans to connect the city of Oka's water treatment facilities with Kanesatake.

For now, Simon said Kanesatake is still reviewing its options.

Simon said the council of Kanesatake has been trying to find solutions for 30 years. They temporarily suspended those efforts when water filtration with salt was available. But the council resumed their search four years ago because they thought the current system was too cumbersome, he explained.

The environment and the local population in the community's densely populated areas are also at risk of contamination from septic tanks, he added.

The Mohawk council used some federal funding to pursue some water studies. This allowed them to explore the different options, including the plans to connect to Oka, which has the nearest treatment plant.

Simon said Kanesatake then approached Oka about a year and a half ago to talk about water. In April, Oka's city council adopted a resolution that has opened the door to a new clean water partnership with Kanesatake.

The resolution calls for the city to join with the Mohawk council in making formal requests for financial support from both the federal and provincial governments so that they can make significant improvements to their drinking water systems.

If Kanesatake approves the joint water project, Oka would then need funding to expand the water plant so that it could accommodate the additional demand.

While some have questioned whether the municipality was trying to take advantage of the situation to get extra funding from Indigenous and Northern Affairs Canada, the mayor of Oka, Pascal Quevillon, said this was not the case.

“What is being said is that we’re using (this situation) to expand our water plant but we don’t need to expand it,” said Mayor Quevillon. “I’ve been in the municipal world for three years and it’s a minority (of the Kanesatake community expressing their doubts) but we hear them as if they’re two thousand people but in reality, they’re four or five and we don’t manage a community with comments from four or five people or it would be impossible to satisfy everyone.”

"Water is essential, it's life... We can't refuse to supply water (to) whoever (is asking), we are all human beings," Quevillon said.

Some within the Kanesatake community disagree about potentially connecting an aqueduct to Oka. Grand Chief Serge Simon said that 80 per cent of the population was in favour of the project, based on a poll of about 300 to 400 people. Kanesatake has a population of 7,645 on reserve, according to Indigenous and Northern Affairs Canada.

However, some aren't pleased about the proposed water partnership.

"My grievance is that they're going to be passing through, digging up all kinds of things, putting pipes down and connecting to Oka's old filtration system that ... has already had problems and had water advisories. "

Alan Harrington who lives in Kanesatake on the weekends but is originally from Shoal Lake 39 in northwestern Ontario, is wary because of what he saw with a similar project back home.

The nearby community of Shoal Lake 40 reached an agreement with the city of Winnipeg and the government of Manitoba in 1989 to protect the water of Shoal Lake.

Winnipeg gets its water from Shoal Lake and both First Nations communities have criticized that system, since it leaves many Indigenous people without clean water. The local Indigenous people in that region also say the water extraction has a negative impact on fishing.

Harrington says he doesn't like what has happened to water supplies, some 30 years after the project was introduced.

In Kanesatake, he said that water quality depended on the location of your house.

Grand Chief Simon said houses close to the well of natural spring water had access to high quality water but others were "less lucky".

"I said (to people who are against the project at a public meeting), 'That's all fine if your water is great but don't impose on the rest of us who need to have clean water and don't impose to us that we don't need this. How do you know? You've got good water, fine, good for you, the rest of us aren't so lucky,'" Simon said.

Another controversial point is the housing development. Proposed to be built on land that is the subject of ongoing negotiation between the Mohawk Council of Kanesatake and the federal government, the development is raising the ire of some in the Mohawk community.

Hydro poles were recently installed and pine trees were cut down to make room for the residential project, Le Domaines des Collines d’Oka. Another 20 houses are planned, said Quevillon.

A protest was staged on the site of the development on July 12, 2017, exactly 27 years and one day after the Oka crisis, a stark reminder of the 1990s standoff sparked by the expansion of a golf course.

Oka Mayor Pascal Quevillon speaks to people in Kanesatake on July 12, 2017 during a protest. Facebook video posted by Steve Bonspiel

Harrington, who was present on that day, was disappointed about what he saw.

"I was watching the mayor stand off with Ellen (Gabriel, the leader of the protest), looking for confrontation with Ellen. To me when I witnessed that I did not like that at all. I thought that looked a little unprofessional of the mayor to do a kind of standoff with Ellen and trying not to back down either," he said.

“We’re tired of being kicked around. We’re really sick and tired of it,” he told National Observer right after a meeting with other chiefs who formally decided that the Mohawk Council was opposed to the residential development.

As Grand Chief, Simon believes he carries the responsibility of promoting peace—but not at all costs.

Simon and his council say they have been facing a great deal of challenges on many fronts. Those include controversies such as the proposed Energy East oil pipeline project, this housing development and the drinking water issues.

Although he believes solving the drinking water problem is essential, he worries the flaring tensions will hurt the prospects of the water project.

Oka Mayor Quevillon is confident that the protest won't interfere with discussions about expanding the water treatment plant. He also doesn't think it will turn into a new crisis.

“I don’t think it’s going to go all the way there, we are very, very, very far from that,” he says. “I don’t see where there would be a problem with the (possibility of) increasing drinkable water and if it’s the case and they don’t want water, we’ll keep it for us. We’re here to help them.”

He says he cannot stop construction of the housing development or Oka could be sued and its citizens could pay “millions” of dollars. He said he doesn't believe that would be fair to his community.

He says this is a problem to resolve between the federal government and the Kanesatake community.

But Grand Chief Simon is bound by a confidential process with the federal government that limits his options.

“If I start talking about it, the (federal government) will say it’s a breach of confidentiality and they’ll close the books on us. We’ve been negotiating for years and we still have some longstanding issues that need to be discussed so it’s difficult.”

Karonhienhawe Nicholas says she's tired of the municipality is infringing on their land again, especially given the past. She says she hopes the federal government will intervene.

"We're going to do it as peacefully as... we don't want have any big conflict but we want the government to acknowledge us and do something about it. Trudeau says that he wants reconciliation to happen. Well, he better start because this is a tiring game the government is playing with us."

Indigenous and Northern Affairs Canada confirmed the lands involved in the housing development are part of the Commons of the Seigneury of the Lake of Two Mountains claim currently being negotiated between Canada and the Mohawk Council of Kanesatake, but that the lands are currently owned by third parties.

“In any settlement of specific claim, the Government of Canada considers the interests of third parties and does not take away privately owned lands,” Valérie Hache, communications advisor, said in an email to National Observer on July 18, 2017.

“As part of claims settlements, Canada’s practice is to provide First Nations with cash compensation under negotiated settlements with which they may acquire replacement lands on a willing-buyer/willing-seller basis for addition to their land base.”

The department said they are “keeping open the lines of communications” with the Mohawk Council of Kanesatake and the Municipality of Oka to discuss the situation.

“Canada will continue to work diligently with the Mohawk Council of Kanesatake towards the resolution of this outstanding historical grievance,” the department added.

Editor's note: This article was updated on July 26 at 2:40 p.m. to correct that Shoal Lake 40 does not get its water from the Winnipeg water system but rather that it shares its water resources with the nearby city in Manitoba.

Twenty-five years since Oka: do we have the courage to recognize injustice and act?