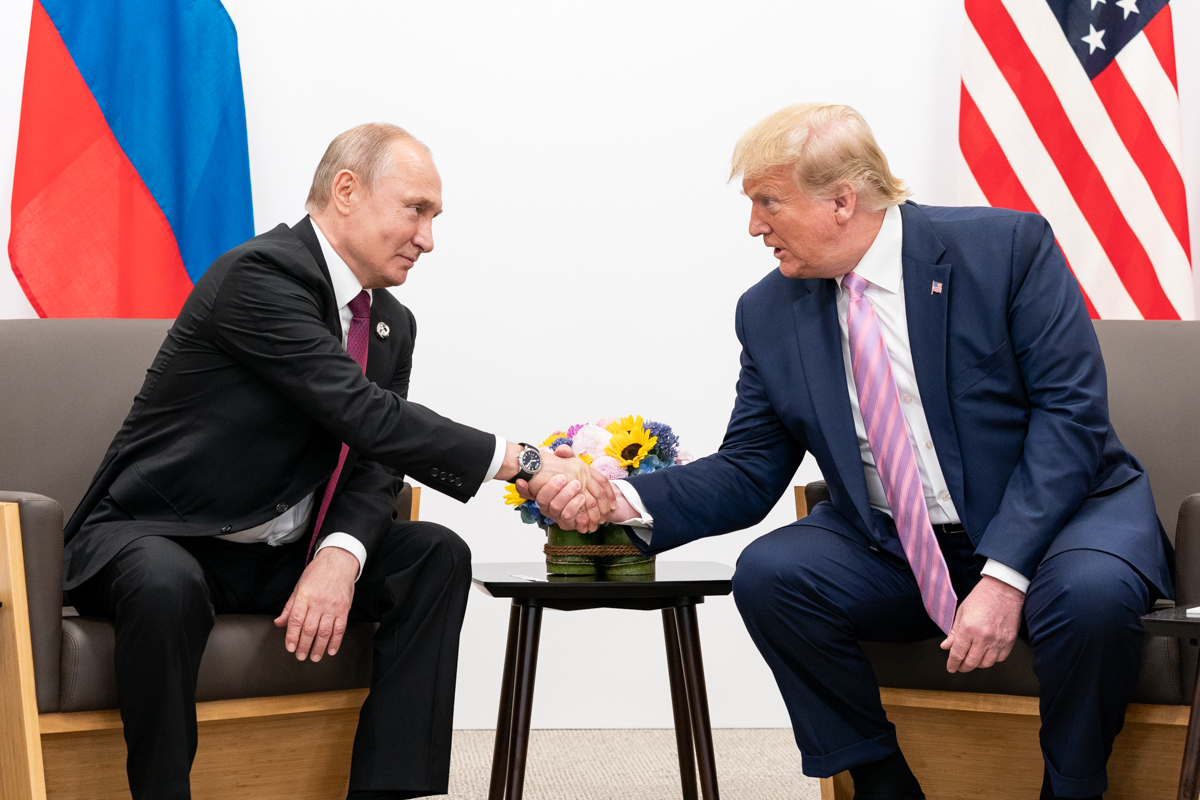 “I have [a] message for Canada as a result of today’s Mueller hearing,” former U.S. Ambassador to Canada Bruce Heyman wrote on Twitter last week.

“Protect your upcoming elections from foreign government interference. Don’t let what happened (is happening) to us happen to you.”

Heyman’s warning came on the heels of special counsel Robert Mueller’s much-anticipated congressional testimony last Wednesday, during which he told the country that Russia’s efforts to interfere in America’s democratic process are ongoing and will take aim at the 2020 campaign, too.

“Over the course of my career, I’ve seen a number of challenges to our democracy,” Mueller said in his opening statement to Congress. “The Russian government’s effort to interfere in our election is among the most serious.”

“It wasn’t a single attempt,” Mueller said later in his testimony. “They’re doing it as we sit here. And they expect to do it during the next campaign.”

He also voiced his concerns that foreign interference in democratic elections may have become “the new normal.”

I fear that Mueller is right — not just in reference to the U.S., but Canada, as well.

I have message for Canada as a result of today’s Mueller hearing- Protect your upcoming elections from foreign government interference. Don’t let what happened (is happening) to us happen to you.

As an American who watched, experienced, studied and wrote about Russia’s information war targeting the 2016 election, I’m alarmed at much of what I see on social media ahead of Canada’s 2019 election. We don’t yet know whether Russia is targeting the upcoming federal election, but we do know that voters have already been targeted by covert and overt foreign influence operations. And despite warnings from Canada’s intelligence and national security agencies, I’m not confident that voters are taking seriously the threat of foreign interference ahead of the federal election.

"It may seem tempting to joke about foreign interference when it looks like it will benefit your side — but Russia isn't on your side," writes @RVAwonk

In the U.S., the issue of Russian interference has been weaponized for partisan purposes, to the extent that Americans can’t even agree on the basic facts. An April 2019 poll by the Washington Post and the Schar School of Policy and Government found that a majority of Republican voters don’t even think Russia tried to influence the 2016 election. Worse, still, is the finding that many Republican voters say they don’t mind if Russia interferes in U.S. elections, as long as it helps their side. Pollsters attribute this disturbing trend to Donald Trump’s lax attitude and rhetoric regarding foreign interference.

Democrats, too, have seized on partisan talking points that aren’t supported by evidence. As of March 2019, two-thirds of Democratic voters said they believe Russia tampered with vote tallies to get Donald Trump elected. This figure has remained stable for at least a year, despite numerous reports stating that there is no evidence of Russia directly manipulating vote tallies.

Now, there are signs of a similar dynamic playing out in Canada.

When National Observer recently reported on inauthentic activity surrounding the #TrudeauMustGo hashtag, many Twitter users responded by denying it outright or, in some cases, turning it into a joke. In one notable instance, an account associated with the Conservative Party of Canada (CPC) posted a series of tweets in Russian that appeared to mock the idea of Russian interference on social media (National Observer did not attribute activity on the hashtag to Russia).

This is not the message that Canadians should be sending just months ahead of the federal election. We already know that Russia makes decisions based on the actions of its targets. In July 2016, Donald Trump “jokingly” called for Russia to hack Hillary Clinton’s emails during a news conference. That same day, Russia made its first efforts to break into Clinton’s personal servers. If the Kremlin believes that Canadians are receptive, or at least indifferent, to foreign interference, this may enough to prompt Russia to intensify its efforts.

Conveying acceptance of such efforts also gives Russia (and other hostile foreign actors) important information — in this case, information that can be used as intelligence — regarding who may receptive and to what type of messaging. As the CSE explained in a report on cyber threats to Canada’s democratic process, “There is a dynamic of success emboldening adversaries to repeat their activity, and to inspire copycat behaviour.”

In other words, Russia is watching its potential target populations and making strategic decisions based on the intelligence gleaned from these observations. Keep in mind: information warfare is not unidirectional. While we tend to focus on tactics such as fake social media profiles and propaganda, there’s another side to information warfare that involves the collection of data from the target population(s). Digital environments, particularly open social media platforms like Twitter, are optimal settings for surveillance and intelligence gathering. Simply observing how individuals, groups and networks function in these environments can yield invaluable data that can then be used for purposes such as selecting target audiences, identifying influencers and tailoring messages to maximize resonance and reactivity.

But is Russia doing this now? Is there reason to believe Canadian's social media activity is being surveilled?

Evidence of this dynamic is reflected in articles published by Russian propaganda outlet RT (formerly known as Russia Today), which has dipped its toes into Canadian politics frequently in recent months, often using tweets from Canadian politicians and media figures to tell the story it wants to convey. The tweets featured in RT aren’t chosen randomly or haphazardly; they're chosen because they align with a narrative that is favorable to the Kremlin. Of course, this doesn’t mean that the politicians and media figures cited in these stories are doing anything wrong by voicing their opinions on Twitter, but it leaves no question as to whether Russia is monitoring social media activity in Canada.

Further evidence that Russia has its eyes on Canada’s social media activity can be seen in the tweets sent by Russia’s Internet Research Agency (also known as the “troll factory”). While the U.S. was its primary target in 2016 and 2017, there are signs that Russia was also interested in Canada. In a database of nearly three million tweets sent from 2,848 IRA accounts, the vast majority of which were posted between 2015 and 2017, the keyword “Canada” was mentioned in 2,750 tweets. Another 679 tweets mentioned the keyword “Trudeau,” 174 mentioned “Quebec,” 125 mentioned “Ontario” and 79 mentioned “Ottawa.”

According to an August 2018 CBC News analysis examining the same database of Russian Twitter accounts, approximately 8,000 tweets mentioned Canadian issues like the pipeline, the Quebec City mosque shooting and the Syrian refugee crisis. This is just a drop in the bucket when compared to the number of tweets mentioning keywords like “Trump” (nearly 159,000) or “Hillary Clinton” (over 55,000), but Canada wasn’t the primary target; the U.S. was. So why were Canadian issues mentioned at all? Perhaps to see how people responded.

Consider that your trial run.

Now, with just months to go until the federal election, recent reporting indicates that voters in Canada have already been targeted by foreign influence operations. A spokesperson for the Canadian Security Intelligence Service (CSIS), the country’s primary domestic intelligence agency, told BuzzFeed News and the Toronto Star in early July that foreign actors “are seeking to influence the Canadian public and interfere with Canada’s democratic institutions and processes.” CSIS and CSE also confirmed that they had detected “covert and overt” efforts to influence the election.

While those reports did not specify where the foreign interference was coming from, Minister of National Defence Harjit Sajjan has previously sounded the alarm about Russia, specifically, and there is good reason to believe that Russia may target Canada.

Whether the threat is coming from Russia, another hostile foreign government or individual bad actors, the success of any interference efforts will depend largely on how Canadians respond to it. Your response not only conveys a message to your adversaries, but also to fellow Canadians. Set an example.

Take it from me: you don't want to go through what your neighbour to the south just experienced (and is still experiencing). Russia succeeded beyond its wildest dreams when it launched its attack on the 2016 presidential election, and it took that success as an invitation to keep coming back. It may seem tempting to joke about foreign interference when it looks like it will benefit your side — but Russia isn't on your side. Eventually, the tables will be turned on you. Don't wait until that happens to take this threat seriously. Don't let disinformation and foreign interference become your new normal.

Mueller's country has been

Mueller's country has been running Ottawa for a long time. We are still in NATO, continuously threatening Russia and breaking treaties. If any country wants to avoid foreign influence in their elections, they should stop interfering in the politics of other countries. I'm looking at you, Canada, and the mining companies who roost on Bay St.

Most likely stone age tribes exchanged gossip/rumours, cast mutual spells and curses in the effort to destabilize and demoralize those who were "preying" on their hunting or flint producing grounds. It seems to be embedded in human DNA.

What makes today's versions of intimidation different are the cowardly, anonymous/pseudonymous avalanches of lies that intend to overwhelm any possible vestige of truth. Those who profit from these avalanches are, in effect, fifth columnists, or double agents, milking both sides, or whichever faction is prepared to pay to lie.

They may be algorithmic geniuses but they are also greedy, unprincipled idiots.

To Bob Stuart: Mueller's country knows so little about Canada and always has that it is too ignorant to "run" Canada. Moreover, Canada was a mover and shaker in the negotiations following the Second World War that shaped and established institutions like the UN, NATO, The Universal Declaration of Human Rights, and until very recently, these institutions helped to keep people from tearing each others throats out.

Those who, like you, seem to think that Canada should not be part of NATO also seem to lack any understanding of global power dynamics or the constant vigilence and negotiation required to prevent the overcrowded (with intellectually challenged people) global societies from exterminating themselves and their "enemies".

Thanks to the power-mad know nothings who pander to and manipulate the fears of the small minded, we now are plagued with greed driven, megalomaniacs and religious fanatics who seem prepared to immolate the world.

Caroline, are you able to

Caroline, are you able to investigate whether Lynton Crosby's propaganda machine is active already in Canada? There was just a Guardian article about his business in professional misinformation for hire, and about Facebook's comfortable inaction on this point. I seem to recall this guy being brought in by Harper before. Is he behind a lot of the so-called "proud" campaigns that we're being assaulted with? To me he seems pretty synonymous with xenophobia and dog-whistling.