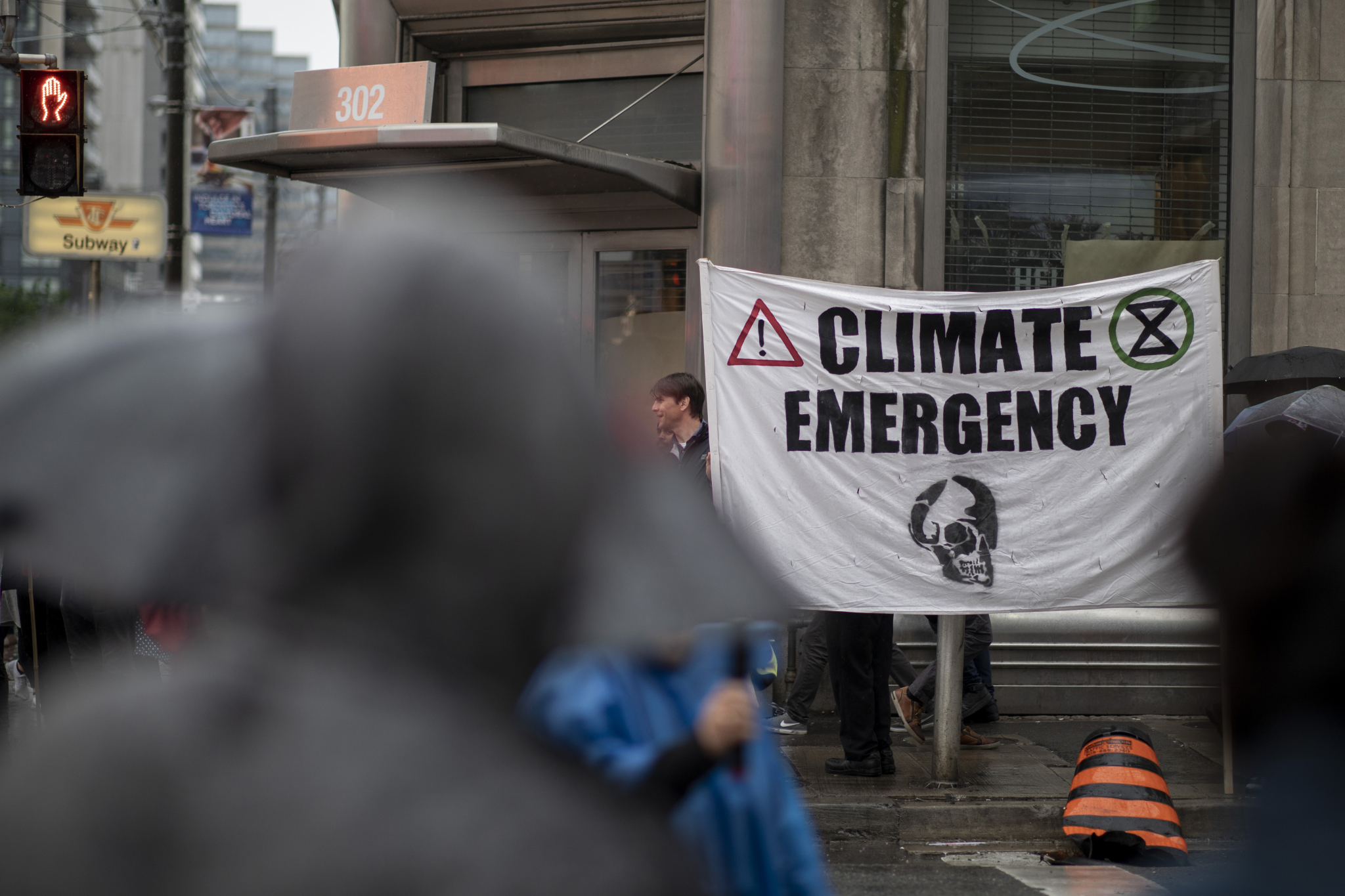 Protesters take over the intersection of Yonge and Dundas streets in Downtown Toronto as part of a demonstration declaring a climate crisis, June 10, 2019. Photo by Nick Iwanyshyn
Previous story
Next story

The federal tax system is "not up to the job" of helping the country confront the climate crisis, says the organization representing Canada's professional accountants.

Chartered Professional Accountants of Canada (CPA Canada) is an influential voice in Ottawa, with members working in all business sectors and levels of government. In recommendations submitted to the House of Commons finance committee, the organization called for a review of the tax system, aimed at addressing the "business issue" of climate change.

"If Canada's economy is to become cleaner and low-carbon, digital and data-driven, and more globally integrated and competitive, Canada's tax system is not up to the job," CPA Canada stated in a press release Monday.

The recommendations were submitted as part of the committee's consultations ahead of the 2020 federal budget. The committee invites Canadian groups and individuals to submit proposals on how they want to see the federal government spend money. This year, the committee's theme was "Climate Emergency: The Required Transition to a Low Carbon Economy."

"Failure to adequately transition to a low-carbon, climate-resilient economy — by either political or business leaders — will further erode public trust in the institutions that underpin our society," reads CPA Canada's submission, which notes that the organization has been looking at the relationship between climate change and business for 20 years.

CPA Canada's call to action represents another arm of Canada's financial services sector willingly throwing its weight behind a push for decarbonization.

It follows a warning this spring by the Bank of Canada, the nation's central bank, which sets the key interest rate and influences money supply, that the climate crisis threatens Canada's financial stability. The central bank named climate change as one of six key vulnerabilities.

As well, Canada's Office of the Superintendent of Financial Institutions, the regulator that oversees insurance firms, banks and other financial bodies, has noted how climate change will impact property and casualty insurance firms.

CPA Canada urged the government to implement several Expert Panel on Sustainable Finance recommendations, including, in its words, establishing a "Canadian centre for climate information and analytics."

"Failure to adequately transition to a low-carbon, climate-resilient economy — by either political or business leaders — will further erode public trust in the institutions that underpin our society," @CPAcanada says. #cdnpoli

The Pan-Canadian Expert Collaboration, a new institute established by Ottawa this spring, an arm of which is chaired by the head of the Intact Centre on Climate Adaptation at the University of Waterloo, is expected to be a independent watchdog holding the government to account on climate commitments.

It also recommended the government "map Canada’s long-term path to a low-emissions, climate smart economy," as the panel suggested. "This is a matter of great concern to CPA Canada," the organization said about such a long-term mapping project.

"Not only is this long-term path necessary to ensure Canada remain committed to its climate objectives, but it is needed to instil business confidence."

Provincial commitments to the federal Pan-Canadian Framework on Clean Growth and Climate Change are "wavering," CPA Canada noted. "Businesses are unsure about how Canada’s climate policy framework will evolve in the coming years. Predictability and certainty are the factors that give business the confidence to make investments."

Canada's "inefficient" tax system was last reviewed in the 1960s, CPA Canada argued, meaning a new one is "long overdue." An independent panel could help reform the system so it encourages the transition to a lower-emission clean economy, the organization added.

In its submissions, CPA Canada also advised the government to map the country's path to a low-carbon, climate-resilient economy. Not only would that help move Canada towards its international climate commitments, but it would give certainty to businesses and investors that are uncertain about how the country's climate policy will evolve in the next few years, the organization said.

"Predictability and certainty are the factors that give business the confidence to make investments," reads its submission.

The federal government should also balance its budget in the short term, CPA Canada said, "to meet both the size of the investment and the risk to the economy, the government needs to have its fiscal house in order."

Editor's note: This story has been updated at 5:45 p.m. on Aug. 15, 2019 to clarify that an arm of the Pan-Canadian Expert Collaboration is chaired by the head of the Intact Centre on Climate Adaptation at the University of Waterloo.

Lets see advice from accountants, where to start, 1) Their complete failure to deal with abandoned oil wells , mines etc. a sinking fund should have been set up for every well or mine that is not tied to the corporation that owns the property. 2) Offshore tax havens, need I go on, accountants are a group of self serving leeches hat have only their bottom line to consider and they have ideas on tax overhaul for the climate crisis, get real.