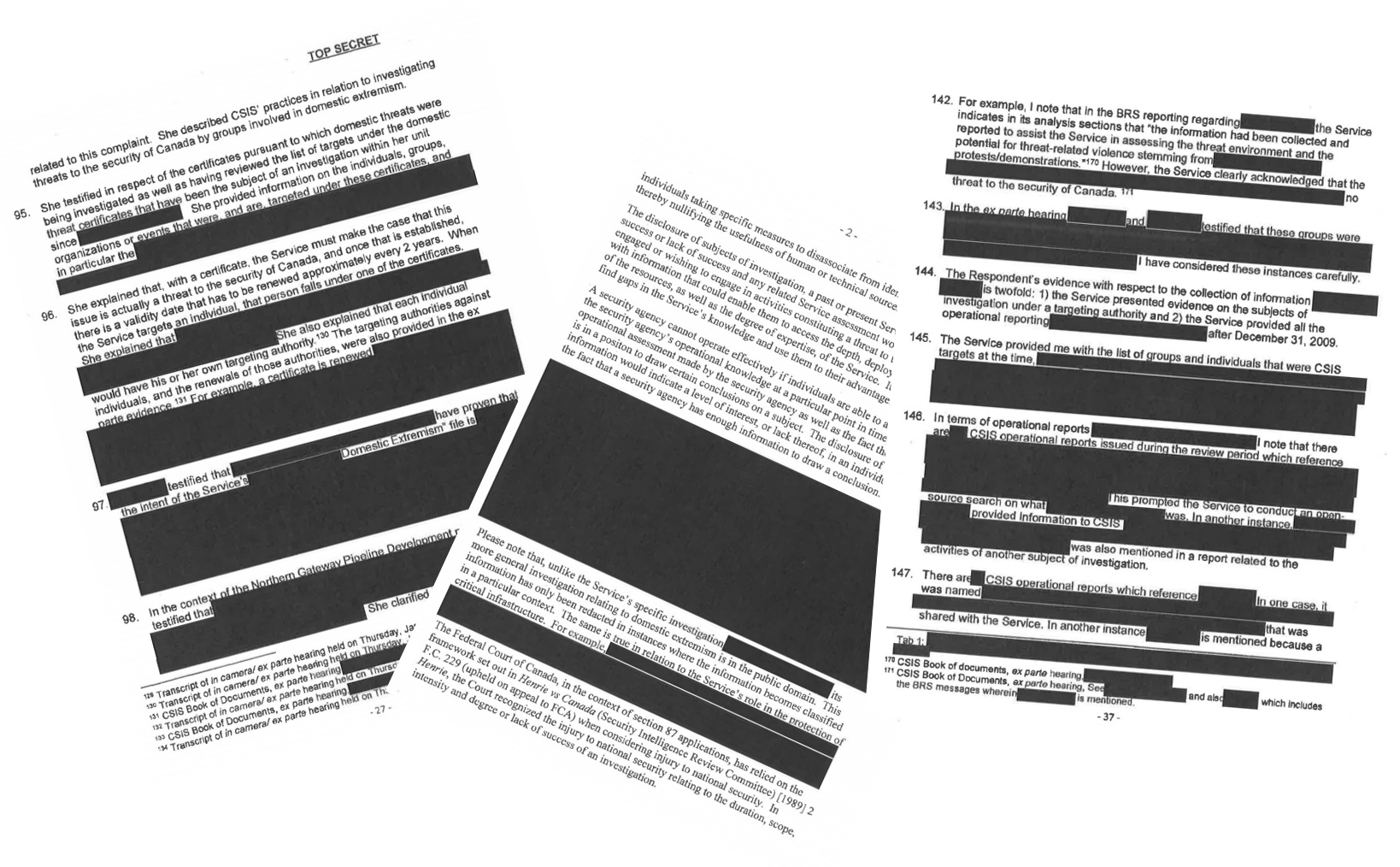 A series of documents taken from the Protest Papers. BCCLA website
Previous story
Next story

In its complaint, the BCCLA specifically claimed that CSIS and the RCMP were monitoring the activities of Sierra Club BC, Leadnow.ca, the Dogwood Initiative (now named Dogwood BC) and ForestEthics (now named Stand.Earth), and that this information was being shared with the NEB and the petroleum industry.

In 2017, the SIRC, which oversees CSIS, rejected the complaint. The BCCLA is now going to federal court to have that decision overturned.

Despite the SIRC ruling, the BCCLA won an appeal to the Federal Court allowing for release of testimony from the secret hearings, as well as documents used in support of the BCCLA’s submission.

Subsequently, on July 6, the BCCLA released over 8,000 pages of heavily redacted documents, which it has referred to as the "Protest Papers."

These documents offer rare insight into the thinking of CSIS agents, as well as concerns among civil society groups that their organizations may be spied on, and even infiltrated, by government security forces.

What is also apparent in the wealth of material, which comprises 19 volumes, is that Canadian media — in particular, the eponymous Vancouver Observer — played a critical role in alerting environmental organizations to the fact that they may have been under surveillance.

On Nov. 19, 2013, Vancouver Observer published an article by Matthew Millar. The article, which was based on documentation from the NEB obtained under the Access to Information Act, quoted emails from the NEB's "group leader of security," Richard (Rick) Garber, stating that the NEB had consulted with CSIS, the RCMP, Enbridge, TransCanada Corp. and a private security contractor working for the NEB.

These consultations were allegedly part of a co-ordinated spying campaign on the organizations named in the BCCLA complaint, as well as on the Council of Canadians, the People's Summit and Idle No More.

With regard to the SIRC hearings, all the witnesses are prevented by a gag order from commenting on their testimony. However, as a result of the BCCLA’s successful appeal, Canadians now have direct access to what was said.

Josh Paterson, executive director of the BCCLA, testified that the Vancouver Observer article initially raised concerns within the BCCLA. After speaking with representatives from ForestEthics, Sierra Club, Leadnow.ca and the Dogwood Initiative, Paterson discovered that there was a consensus: all four organizations believed they were being targeted by the Canadian government.

According to the Protest Papers, Celine Trojand, who at the time was the director of organizing for the Dogwood Initiative, testified to the SIRC that the reporting from Vancouver Observer had a profound effect. “When the article came out in the National Observer (sic), it was upsetting, certainly,” she said when questioned by Paul Champ, the lawyer representing the BCCLA. “There are some things that we did...we beefed up some of our data security, for example.”

Trojand further testified that, after the Vancouver Observer article was published, some Canadians were reluctant to get involved in environmental activism, “because they were worried that they would be ‘on a government list,’” and that Dogwood’s volunteers were “a little bit creeped out.”

The documents show that another witness, Nikki Skuce, senior energy campaigner for ForestEthics, responded with a series of simple “Yes” answers when confirming to Champ, and also to Stephanie Dion, counsel for CSIS, that it was the Vancouver Observer article that first raised her concern that ForestEthics was of interest to the government.

The SIRC also heard from Caitlyn Vernon, campaign director for Sierra Club BC. On Nov. 27, 2013, Vernon wrote a piece for The Huffington Post entitled "Why is The Country I Love Spying on Me?" which specifically referenced Millar’s article, and which lamented that, with regard to the revelations, “the media reported precious little of any of it.” Vernon has since spoken out against the gag order.

Dion attempted to catch Vernon in a contradiction in her testimony, given that Vernon had previously told Champ that, with regard to surveillance, “we don’t really know what is going on now.” When asked by Dion to reconcile her testimony with the certainty expressed in her article in The Huffington Post, Vernon stated:

Jamie Biggar, co-founder of Leadnow.ca, came before the SIRC in his capacity as Leadnow.ca’s campaigns director. In his testimony, Biggar stated that in 2012, Leadnow.ca began an online campaign against the Enbridge Northern Gateway pipeline project. This campaign was in part a response to an open letter published on Jan. 9, 2012, in the Globe and Mail, in which Joe Oliver, then the natural resources minister, characterized Canadian environmental groups as having a “radical ideological agenda” and using “funding from foreign special-interest groups to undermine Canada's national economic interest.”

Biggar said that the rhetoric from Oliver’s piece, as well as revelations of possible surveillance of a workshop held in January 2013 by Leadnow.ca and Dogwood in Kelowna, B.C., which a CSIS employee allegedly attended, “created a sense for us that we simply couldn't even know the size and the scope of surveillance or intelligence gathering that was being conducted.” The workshop was intended to help prepare citizens to testify to the NEB about Enbridge’s Northern Gateway pipeline proposal.

Among the Protest Papers is the Enbridge Northern Gateway Project Integrated Security, Logistics and Communications Plan, Kelowna. Dated Jan. 28, 2013, the document includes a “threat assessment” of Idle No More, People’s Summit, Leanow.ca, the Dogwood Initiative and EcoSociety. Though largely redacted, the document confirms that “the Kelowna RCMP as well as NEB communications and security continue to monitor open-source information.” Similar assessments were allegedly made for hearings in Vancouver, Victoria and Prince Rupert.

Biggar testified that Leadnow.ca now assumes that any device used by its employees and volunteers is vulnerable to being spied on by the government, with that information possibly being shared with industry.

One witness shared accounts of suspicious behaviour, and concerns that her group might have been infiltrated by agents provocateurs.

Terry Dance-Bennink, who worked with Dogwood, testified that while canvassing at a festival in Langford, B.C., “we were about to call it quits when we noticed a man a fair distance away from us with a very large camera and a telephoto lens taking pictures of me and the team... I remember pointing my finger at him, and when I did that, he disappeared shortly afterwards.”

Dance-Bennink claimed that the incident was “suspicious,” “unpleasant” and “creepy,” adding that “incidents like that have happened since then.”

She went further, stating that in her view, it was highly likely that informers attended Dogwood events, and were monitoring and gathering intelligence, which she believed was then passed on to the government and to the NEB.

“I say that on the basis of the Access to Information request, the fruits of media inquiries and the BCCLA initiative, all of which clearly seem to indicate that certain pieces of information could not have been garnered except through that means.”

In response to questioning from Champ, Dance-Bennink gave a specific example of what may have been an attempt at infiltration by an agent provocateur.

“There is one person in particular I am thinking of in Victoria, who is no longer now working with us, but he was a very strange person,” she said. “For me, one of the red lights is that this person would often encourage us to go to the legislature, to organize big mass events, vigorous rallies... So anybody who tries to encourage us to take a more aggressive intervention is someone that I am very suspicious about.”

A rare look inside CSIS

The Protest Papers also provided a rare look into the workings of CSIS. The testimony of the agency’s regional director for British Columbia and the Yukon was largely unredacted, though his identity was protected.

The testimony was constricted by a long-standing CSIS policy stipulating that the service cannot confirm or deny any specific investigation. However, the regional director did confirm that “one of the federal government's security priorities is to protect critical infrastructure, and as part of that broad-based mandate, the service has a niche role if there is threat-related information that impacts critical infrastructure.”

In response to Champ’s questions as to what activities would trigger an operation, the CSIS employee stated that, despite having a law degree, he was “not smart enough to recall the nuances of legal opinions,” and that it was the regional director general who would have final say on whether CSIS could proceed.

However, the regional director did offer some clarification by testifying that, “If there is violence associated with a protest at some critical infrastructure, it would fall below our threshold. It would have to be ‘serious violence.’ Breaking windows, in my view, is not ‘serious violence.’”

The regional director testified that information-sharing agreements between CSIS and other organizations, including those outside of government, require ministerial approval. In response to a specific question from Champ as to whether CSIS had an agreement with the NEB, the regional director said, “not to my knowledge.”

When pressed by Champ to clarify that there could be an arrangement with the NEB he was unaware of, the regional director said, “that’s correct, sir.”

You're being watched, Canada

You have to remember, you're

You have to remember, you're the good guys.

There's nothing illegal and nothing shameful about such protests. There's no reason not to be the ones standing in the sun, offering full disclosure upon all activities, asking the other side why they are skulking in the shadows.

Protest groups should be sending CSIS, the RCMP, and media copies of the minutes of their meetings, notices of intent to protest, politely requesting police presence to "protect legal protesters from interference by corporate security personnel that may abrogate their lawful rights".

Don't be "creeped out"; be superior and amused. You're the good guys.

So often the energy is being put into the least important operations while ignoring the real disturbers of the peace - such as the resurgent white nationalist quasi Nazi fascist groups plotting and carrying out violent confrontations. Government tolerance of "state sponsored" terrorism as in Russia's gangs of "wolves" trained by its security apparatus and deployed to create havoc in the countries Russia claims as satellite subject states and the US government's failure to monitor or prosecute the violent white supremacist fascist organizations mobilizing in swelling numbers, are mirrored in such failed states in the Middle East, in Africa, South East Asia, and in South and Central America. All these orgainzations of terror are the bully schoolyard gangs who have grown up to become adult internal terrorists.

Why should ISIS et al go to the expense and trouble of deploying external terrorists when they can so easily bamboozle the disaffected citizens of the "stable" democracies into full bore linear panic modes and foment internal violence so easily?