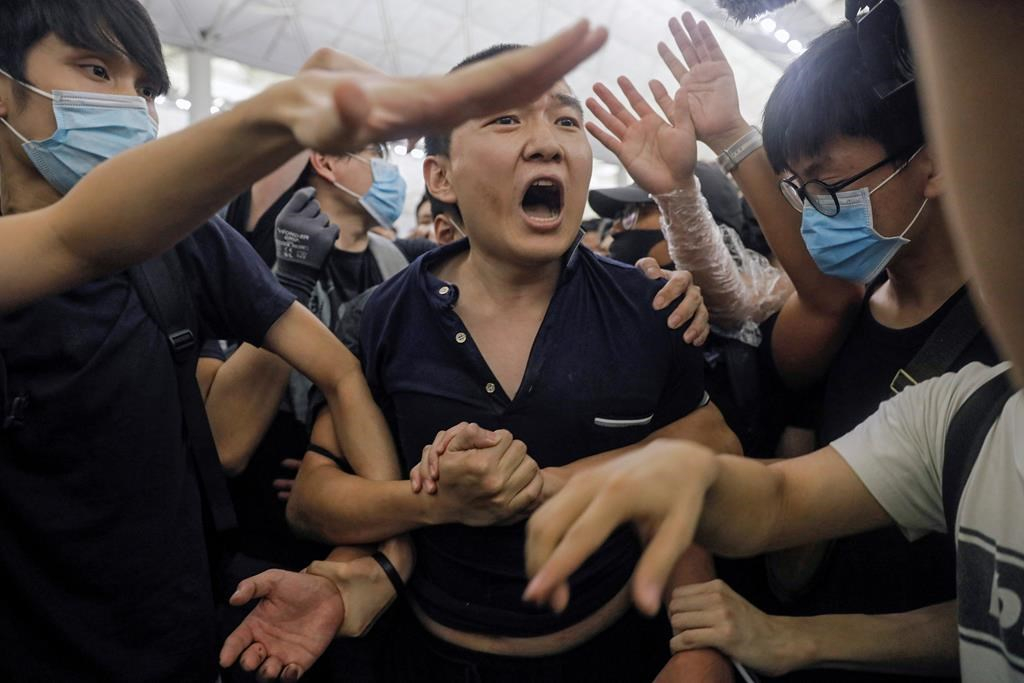 Protesters detain a man, who protesters claimed was a Chinese undercover agent during a demonstration at the Airport in Hong Kong, on Tuesday, Aug. 13, 2019. Photo by The Associated Press/Vincent Yu
Previous story
Next story

The federal government is warning Canadians about travelling to Hong Kong amid massive protests and the Chinese military amassing on the border.

The travel advisory went up around 9:30 ET this morning telling Canadians to "exercise a high degree of caution in Hong Kong due to ongoing large-scale demonstrations."

"Our government is very aware that there are 300,000 Canadians in Hong Kong," Foreign Affairs Minister Chrystia Freeland told a news conference Wednesday in Toronto, where she met with German's foreign minister Heiko Maas.

Canadians in Hong Kong should contact the Canadian consulate there if they need help, she added.

Demonstrators and police have clashed violently in recent days after protesters took over the airport, shutting down all flights in or out for two days.

The demonstrations began last spring after the Hong Kong government introduced a bill that would allow Hong Kong citizens to be sent to China if they are arrested. The protests escalated in June and have continued.

On Monday, the second day protesters shut down the airport, clashes with riot police became violent. Chinese troops, meanwhile, have been seen amassing in large numbers in Shenzhen, a Chinese city about 30 kilometres from Hong Kong.

More than 600 people have been arrested in Hong Kong as demonstrators voice their calls for democratic reforms.

The Chinese government referred to the protesters as terrorists. Freeland said governments should be careful about such labels.

"I think that it is very important everywhere in the world for governments to listen to the concerns of their people," she said, adding that while it may be tempting for governments to label protesters as something else when they do not agree with the message, "it is a mistake to do that."

Businessman Michael Spavor and former diplomat Michael Kovrig were detained in China in December shortly after Meng was arrested at the Vancouver airport to face possible extradition to the United States, where she faces fraud charges.

Freeland acknowledged "the dignity and the courage" of the two detained men and their families, and mentioned her one-on-one meeting with China's foreign minister Wang Yi last month in Thailand, where they discussed the Spavor and Kovrig matter as well as the extradition process for Meng.

"It was a positive step that we were able to have a direct conversation about that."