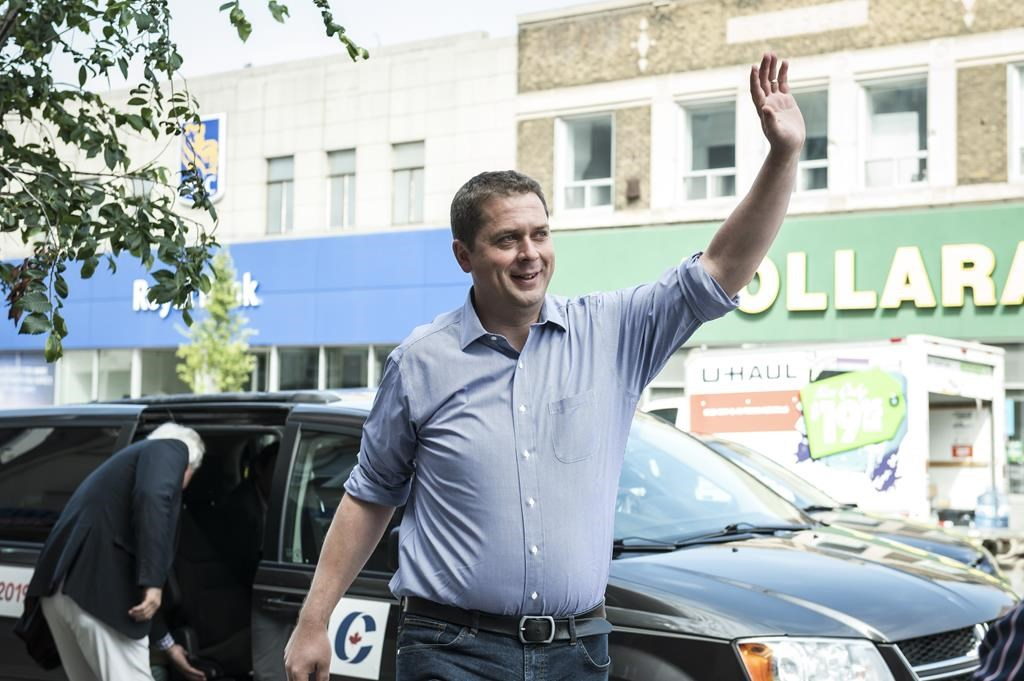 The federal Liberals hinted on Thursday at some of the notes they will look to strike in the fall campaign to win over young and progressive-minded voters when they circulated a video of Conservative Leader Andrew Scheer speaking out against same-sex marriage early in his career as an MP.

Public Safety Minister Ralph Goodale tweeted a short, edited video of an April 2005 speech Scheer gave in the House of Commons explaining his opposition to the Civil Marriage Act, which legalized same-sex marriage in Canada later that year.

Along with the video came a challenge to march in Sunday's Ottawa Pride parade, noting Scheer has never done so.

The parade has taken on some additional significance this year after Ottawa Mayor Jim Watson days ago came out as openly gay after decades in public life.

"There is nothing more important to society than the raising of children, for its very survival requires it," Scheer said in his speech, delivered about a year after he was elected as the Conservative MP for the Saskatchewan riding of Regina-Qu'Appelle for the first time.

"Homosexual unions are by nature contradictory to this," he said.

"There is no complementarity of the sexes. Two members of the same sex may use their God-given free will to engage in acts, to co-habit and to own property together. They may commit themselves to monogamy. They may pledge to remain in a loving relationship for life," he said.

"In that sense they have many of the collateral features of marriage, but they do not have its inherent feature, as they cannot commit to the natural procreation of children. They cannot therefore be married."

The majority of Conservative MPs voted against the bill, as did a number of Liberal MPs. Some remain in caucus.

Brock Harrison, director of communications for Scheer, said the Conservative leader has no plans to change same-sex marriage laws.

"Mr. Scheer supports same-sex marriage as defined in law and as prime minister will, of course, uphold it," Harrison tweeted Thursday.

"This is yet another desperation tactic from Trudeau on the eve of an election to distract from his record of failure and incompetence."

Scheer has softened his stance on same-sex marriage since the debates over the Civil Marriage Act.

He supported a move to erase the traditional definition of marriage from the Conservative Party of Canada's policy book at its 2016 convention, arguing Canadians already had their say in two elections where same-sex marriage was a major issue, and that it had been legal for more than a decade.

Still, the Conservatives said earlier this year he would not take part in any Pride events, and he has dodged questions about his personal beliefs.

"People have personal views on things," he said in a 2016 interview with CBC.

Goodale said Thursday that promising not to reverse legislation on same-sex marriage does not go far enough.

"The unfortunate reality is that too many Canadians still face discrimination, hate and violence because of their sexual orientation," Goodale said in a statement. "Canadians expect action, not words alone."

Goodale, who was not otherwise available for comment, voted in favour of legalizing same-sex marriage in 2005.

But he did vote against a private member's motion calling for the recognition of same-sex spouses in 1995.

In 1999, Goodale voted in favour of a motion saying it was necessary to state that marriage should remain between one man and one woman, and that Parliament should do what it could to protect it.

NDP Leader Jagmeet Singh stepped into the fray to say Scheer's comments are why his party would not support the Conservatives should they win a minority government in the Oct. 21 vote.

"We can't trust Mr. Scheer or his caucus to champion the fundamental rights of Canadians," he said in a statement.

Jonathan Rose, an associate professor of Canadian politics at Queen's University, said the video is setting the stage for the campaign to come.

"All parties need to is sow the seeds of doubt," he said.

"This won't cause anyone to change their mind, probably, but over time, the slow, steady, drip, drip, drip of these kinds of allegations from now right to election day may have people change their minds," he said. "It's the first salvo in a long, ongoing war."

Ottawa Mayor Jim Watson comes out as gay after 40 years