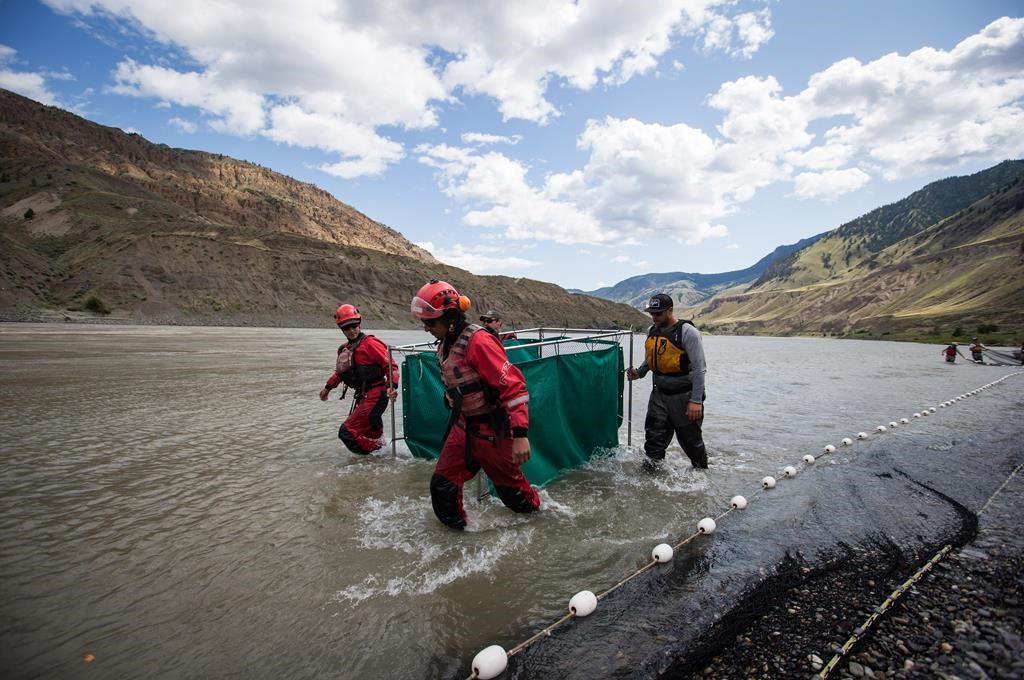 Fisheries and Oceans Canada officials and members of the B.C. Wildfire Service move salmon in a temporary holding pen on the Fraser River before being transported with a helicopter past a rock slide on July 24, 2019. File photo by The Canadian Press
Previous story

Authorities dealing with a massive landslide in British Columbia's Fraser River say they've successfully helped thousands of salmon migrate north of the site, but millions of fish remain threatened by the obstruction.

The Department of Fisheries and Oceans, the provincial government and local First Nations set up a team to lead the response to the slide near Big Bar, north of Lillooet, after it was discovered in late June.

The team says in a news release Monday that fish counting data shows some chinook salmon have been able to swim past the slide using the channels the team has created with large rock manipulation and blasting.

It says as of last Tuesday, a rough estimate of 6,700 salmon have passed through the slide on their own.

The team says the limited fish passage is a "significant and hopeful step forward," but a tremendous amount of work still needs to be done before all fish can transit above the slide.

It says while operations to create stable, long-term natural passage move forward, it continues to transport fish by helicopter and has moved over 39,000 salmon past the slide using this method.

The slide could affect the ecosystem and other species dependent on the survival of salmon, and that's why authorities are working together to explore and address every avenue possible to enable passage, the news release adds.

"The inability of chinook, sockeye, coho and pink salmon to migrate above the landslide area this year, and in future years, could result in significant negative ecological, economic, and cultural impacts to all British Columbians and people throughout the region," it says.