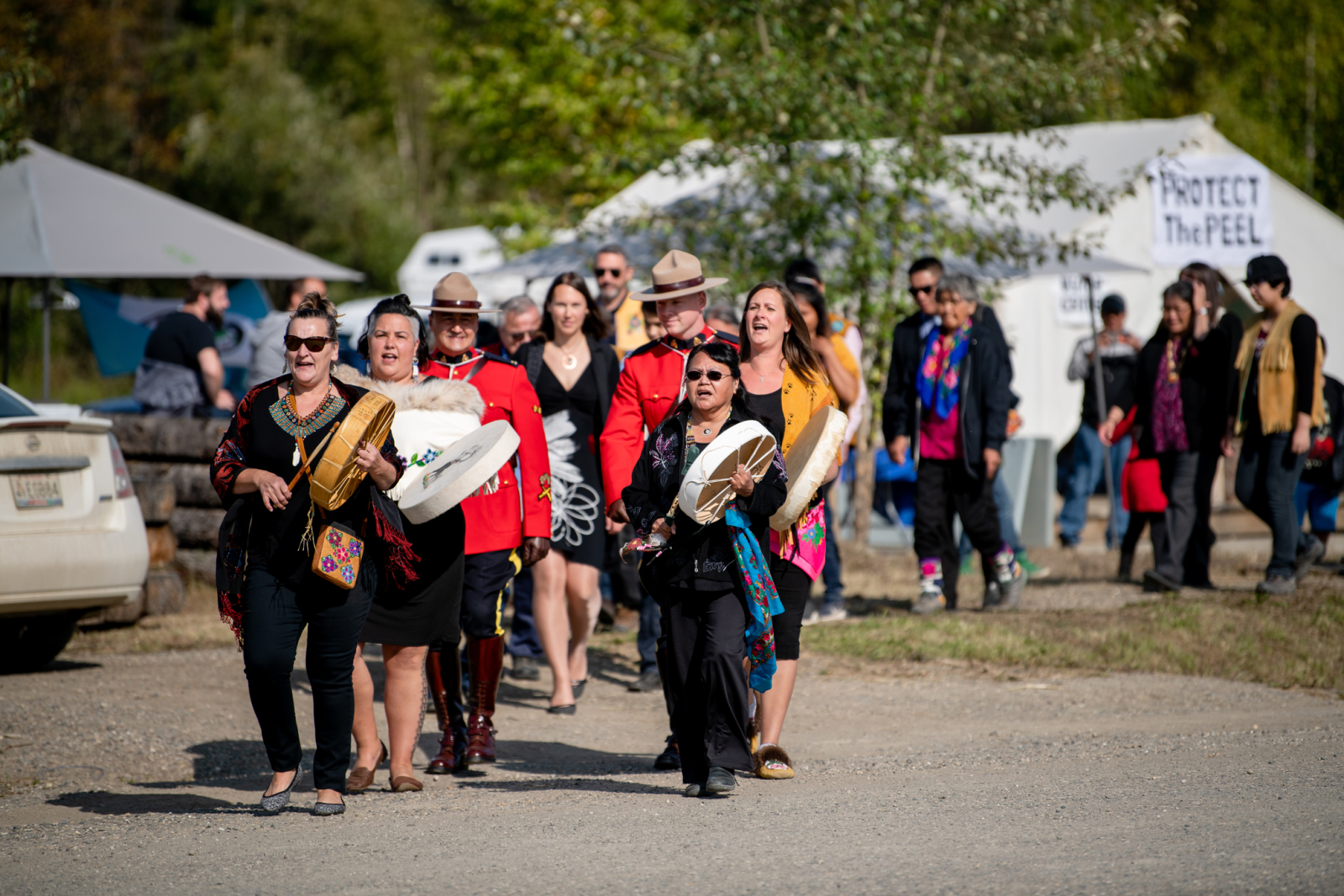 A procession starts the Peel Watershed Regional Land Use Plan Signing Ceremony on Aug. 22, 2019 at Galena Park on the traditional territory of the Nacho Nyak Dun First Nation in Mayo, Yukon. Photo by Government of Yukon/Alistair Maitland Photography
Previous story
Next story

First Nations of the Peel Watershed came together with the Yukon government on Aug. 22 after 15 years of negotiations, court battles, protests and consultations to sign a landmark planning agreement that would protect more than 67,000 square kilometres of critical wilderness in the watershed region.

“We have decided that the long-term spiritual health of our people is more important than short-term economic gains and that our grandchildren deserve clean natural places in which to hunt, play and pray," Mervyn said.

In the absence of leaders who have died in the time since initial planning commenced, the collaborative land management plan is a significant step toward more sustainable land management in Canada’s North.

Land use planning for the Peel Region began in 2004 and final recommendations were put forward by the Peel Watershed Planning Commission in 2011. But in 2014 the Yukon government tried to reduce the protected area from 80 per cent to 29 per cent of the region.

The matter was taken to court by Indigenous stakeholders on grounds that drastic alterations to the plan were in breach of their final agreements. The Yukon government appealed decisions in favour of Yukon’s First Nations. In 2017, the Supreme Court of Canada upheld lower court rulings, putting the wheels back in motion. Yukon and First Nations governments signed a letter of understanding in 2018, pledging to work on finishing the plan collaboratively.

The Peel Watershed Regional Land Use Plan now protects 83 per cent of the region.

“Looking back after such a long, long journey, it was well worth it now that we can stand here and say that we successfully defended the integrity of our final agreement and the right to the democratic planning process promised in those documents,” said Chief Roberta Joseph of the Tr'ondëk Hwëch'in First Nation.

What is the Peel Watershed?

The Peel Watershed Planning Region is a 67,431-square-kilometre area in which 14 per cent of Yukon’s territory is drained into the Arctic Ocean via the Mackenzie River Delta. The region is important to migratory wildlife such as birds and the endangered boreal caribou. Large mammals ⁠— grizzly bears, moose, dall sheep and wolves ⁠— also share the habitat.

Dana Tizya-Tramm of the Vuntut Gwitchin First Nation said the “67,431 square kilometers will never truly hold, nor can any line or border contain, the true value of what this land represents. ... The Indigenous peoples of these areas will not sell the experience of our youth.”

Tizya-Tramm said that the Supreme Court ruling set an important precedent toward respecting treaties and Indigenous self-governance embodying a model for others to follow.

He said he believes this is essential for protecting natural habitats: “We need large swaths of lands that drive ecosystems such as this to insulate the animals, flora and the fauna.”

Indigenous leaders were unanimous on preserving the land as a primary concern throughout the process.

“Today we are all Peel people,” said Jordan Peterson, deputy grand chief and vice president of Gwich'in Tribal Council. “The land is our greatest teacher, provider, life giver and home.”

“There was no choice for us when it came to protecting the Peel Watershed. This plan is a promise from us to our future generations to protect this region as a rich and pristine place to learn, live and grow — just as it was left for us.”

According to the Yukon government, the plan was guided by Final Agreements, the Gwich'in Comprehensive Land Claim Agreement and the Supreme Court of Canada. A public planning commission through Chapter 11 of the Yukon First Nation Final Agreements produced it. The region is divided into 16 land management units with “specific recommendations pertaining to land use, conservation and monitoring.”

The plan subdivides the region so that 55 per cent falls under the designation of “Special Management Areas,” which are under permanent protection; 25 per cent falls under “Wilderness Areas” under interim protection; and three per cent are under a new designation called “Wilderness Areas-Boreal” given interim protection and intended to protect the endangered boreal caribou. Some 17 per cent of the area is open to various degrees of development. Any changes to the plan must be approved by all signatories.

Yukon Premier Sandy Silver reiterated commitment to reconciliation and stressed the wider importance of the region.

“The Peel Watershed is one of North America’s largest and most pristine natural areas. It is one of the truly last pristine wild environments anywhere in the world,” Silver said. “We’re working towards reconciliation and completing a plan which is so important to all of us. … To our federal partners, thank you for understanding that decisions on the North are to be made by Northerners.”

While the federal government was not directly involved in negotiating the plan, Indigenous treaties in Canada are signed with the Crown.

“Reconciliation isn’t just talk; reconciliation is recognizing self-governance,” said Catherine McKenna, federal minister of the environment and climate change, who was also present at the ceremony.

Thanks to the incredible efforts of local First Nations and the Yukon government, 67,431 square kilometres of the Peel watershed are now protected — but it's hard to quantify how important that really is. Chief Tizya-Tramm's words genuinely moved me yesterday. Please listen. ⬇️ pic.twitter.com/iBVABlS0AX

McKenna promised that the federal government will continue to work with First Nations. She noted that the planning region covers around 0.5 per cent of Canada’s land mass, and called it significant, both nationally and globally.

“The world needs to see what true partnerships with Indigenous peoples look like,” she said. “They need to understand that self-government matters, that Indigenous peoples care greatly for their lands and they should be responsible for protecting them.”