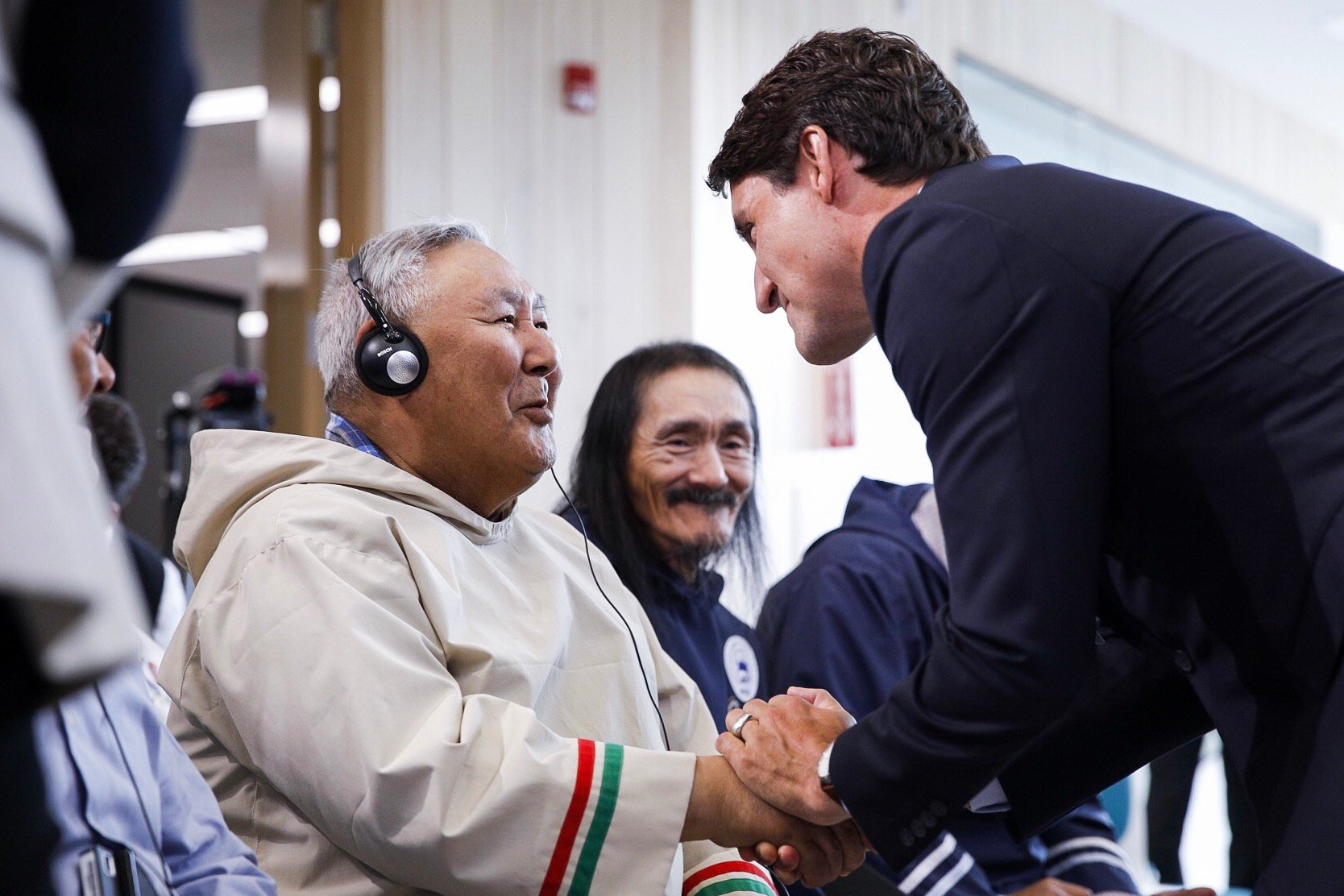 Prime Minister Justin Trudeau shakes hands with a member of the audience at his Aug. 1 announcement to create the Tuvaijuittuq Marine Protected Area in the northeastern region of Nunavut. Photo by Alex Tétreault/PMO
Previous story
Next story

Justin Trudeau was about five years old when he first flew over Canada's Arctic in a very small plane with his father, stunned as he witnessed 100 narwhals breaking through the sea ice.

Things have changed drastically since then.

"The place I'm about to visit is rapidly changing," he said in Iqaluit, Nunavut, before a trip to the Arctic on Wednesday.

Today Canada is warming at twice the global rate, with northern Canada warming at three times the global average. Two weeks ago, temperatures in Alert, Nunuvat — the northernmost permanent settlement on Earth (near the North Pole) — peaked at 21 C for the first time in history.

A recent report by Canadian scientists warned that most Canadian Arctic marine regions will be free of sea ice by the summer of 2050 and that the rest could disappear by 2100.

This melting sea ice and increased shipping traffic in Canada's North have posed increased threats to many sea-dependent local species, including sea birds, bowhead whales, polar bears and seals. And the narwhals that once stunned a young Justin Trudeau are migrating away.

On Thursday, Trudeau announced the creation of one of the world’s largest conservation areas and Canada's largest marine protected area: the Tuvaijuittuq Marine Protected Area and the Tallurutiup Imanga National Marine Conservation Area, both in the northeastern region of Nunavut.

Tuvaijuittuq means "the place where the ice that never melts," Trudeau said Wednesday. It's the last place in the Arctic that is expected to retain sea ice in the summer months despite global warming.

This is the place that has long had "a huge place in Canadian imagination," he said.

"Climate change threatens a place and everything it represents that has defined its country and its people for generations," Trudeau said. "The 'true, north strong and free.' It's more than a line in a hockey game. It's who we are."

To protect it, Trudeau, along with Nunavut Premier Joe Savikataaq and P.J. Akeeagok, the president of the Qikiqtani Inuit Association, unveiled historic plans to create a 427,000-square-kilometre conservation area off northern Ellesmere Island at Nunavut Arctic College. Fisheries Minister Jonathan Wilkinson and Environment Minister Catherine McKenna were also in attendance.

The allocated area is larger than Newfoundland and Labrador, according to a statement from the Prime Minister's Office, or almost the size of Germany, according to the World Wildlife Fund (WWF).

With its creation, the federal government says it has exceeded its goal to protect 10 per cent of Canada's marine and coastal areas by 2020. Trudeau said today they had hit 14 per cent, one year ahead of schedule.

Today, we’re proud to announce that we are now protecting nearly 14% of #OurOceans, exceeding our international marine conservation target. Discover Canada’s #MarineProtectedAreas and the species that we’re protecting. https://t.co/m6ttZBFlxH pic.twitter.com/96Z4PBo6qw

'An Arctic guided by the spirit of reconciliation'

For the Inuit leaders in attendance the size of the protected area wasn't the big success.

This was a battle they had fought for years — and finally won.

"The land and water is good — we want to protect it — but it’s about people," he added.

Today, alongside Prime Minister @JustinTrudeau and @Qikiqtani_Inuit President PJ Akeeagok, I helped announce the creation of the Tuvaijuittuq Marine Protected Area and Tallurutiup Imanga, to protect the last ice area and create development opportunities in the High Arctic. pic.twitter.com/SK1mo2GO4D

For several years, the Qikiqtani Inuit Association, working with the governments of Canada and Nunavut, has led the charge to make Tuvaijuittuq a marine protected area, which comes with an agreement to build a conservation economy to ensure local Inuit communities benefit culturally and economically, as well as environmentally.

In his announcement, Trudeau also promised to deliver $190 million over seven years to help create jobs and support families in five communities near Arctic Bay.

These investments were part of "a new model" of conservation, Trudeau said, which will support small-craft harbours, new community buildings, food-processing units and a stewardship program that will strengthen Inuit knowledge (of monitoring the landscape, maintaining cultural sites and intergenerational methods of conservation) that they have employed to safeguard the region for many decades.

"As you've heard me say many times, the environment and economy must go hand in hand," he said. "Protecting these waters does not necessarily, automatically, ensure better outcomes for Inuit communities."

"This is not the standard way that Canada has approached conservation and protection," he said. "The idea that the Inuit will still use the area … that those that are still employed now will continue to harvest and bring food back to their families and their communities...This is a new way of seeing conservation."

Savikataaq said the federal government's investment in the Arctic is really important, as the territory generally feels left out of Canada’s economy. “We are proud Canadians but we don’t want to be left out, and this is a good example of bringing people in," he said, adding that the investment will have "a ripple effect."

"When something happens in Nunavut, it doesn't just benefit Nunavut, Inuit. It benefits all of Canada," he said. "We're not a manufacturing province. Everything comes from the south."

This was Justin Trudeau's third trip to Nunavut as prime minister, and his efforts to build a partnership with the Inuit leadership and communities did not go unnoticed Wednesday. Trudeau first visited in 2017 to sign the Inuit-Crown partnership. Then in March, he visited Iqaluit to apologize to Inuit for abuses suffered during tuberculosis treatment in the mid-20th century.

"This is what could be done when Inuit and the government of Canada come to the table as equals," Akeeagok, the Qikiqtani Inuit Association president, said Wednesday. "We could protect our oceans and our people... We could preserve our sea ice and provide our children's future."

"We dreamed of a day when these waters would be protected," Akeeagok said. "An Arctic guided by the spirit of reconciliation. An Arctic with pristine water teeming with wildlife governed by Inuit stewardship."

"Today we have taken a significant stride to that vision."

When asked by reporters if this was an early pitch for his campaign for the federal election set to take place in 81 days, Trudeau said that "at the heart of everything Canada can and must do in the North is a partnership with Inuit."

​​​​​​"Canadians understood how important it was to rebuild our relationship with the Inuit," he said, noting, too, that when Conservative Leader Andrew Scheer visited the region he never said the word "Inuit."

"We had 10 years of inaction under Stephen Harper," Trudeau said. "That changes now."

In a statement, Megan Leslie, president and CEO of WWF-Canada said they were thrilled to welcome the new protected area in the Arctic — something they, too, have been fighting for as the Earth's northernmost region "will become increasingly vital locally, nationally and globally as the climate crisis worsens.”

Moving forward, WWF said that a five-year feasibility study will also look at permanently protecting it from future threats such as oil and gas development.

Like Trudeau, Akeeagok also invoked the national anthem in his remarks. Until today, Akeeagok said Canada had only safeguarded the country East Coast to West Coast. "The third coast was forgotten and our people left behind."

He paused before looking at the people gathered at Nunavut Arctic College, and smiled: "We did it."

Editor's note: This story was edited on August 2, 2019 at 12:58 p.m. EST to correctly identify the location of the new conservation area.