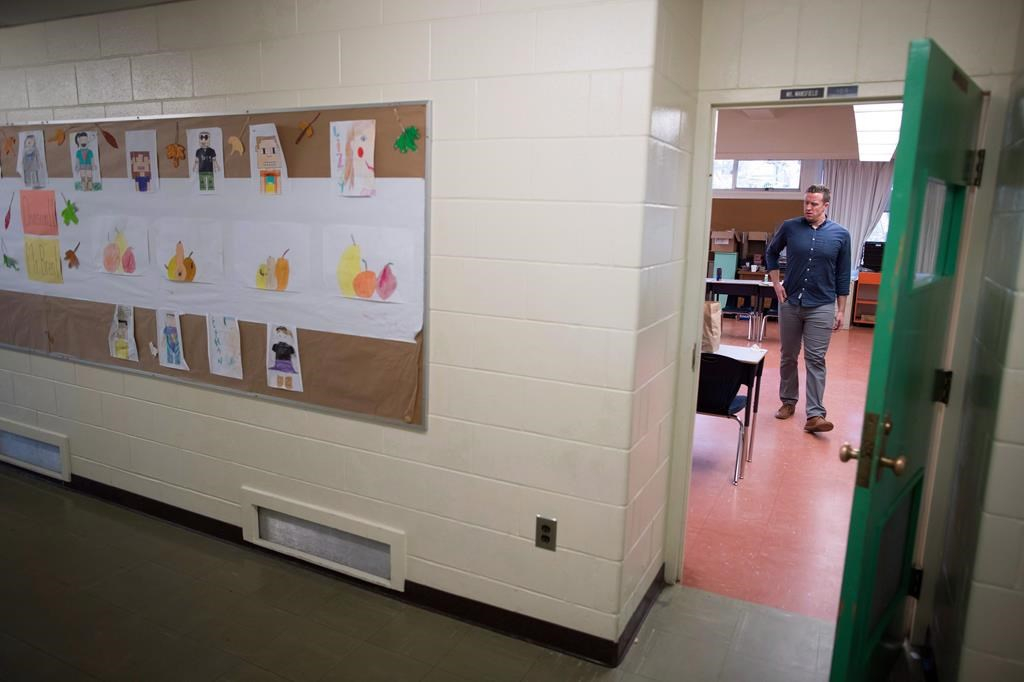 Teacher Brent Mansfield is seen in his classroom at Lord Roberts Elementary School in Vancouver, B.C., on December 6, 2017. File photo by The Canadian Press/Darryl Dyck
Previous story
Next story

As Quebec students return to school this week, many are heading into classrooms without a full-time, qualified teacher to learn from, two Montreal-area school boards say.

Too few education graduates coupled with soaring immigration has led to a teacher shortage that has school boards scrambling for personnel amid what one union leader describes as a crisis.

Gina Guillemette, a spokeswoman for the Montreal-area Marguerite-Bourgeoys school board, said the board was still missing about 40 full-time teachers on the first day of school.

While there's an adult in every classroom, the board has been forced to fill the gap with substitute teachers, some of whom don't have a teaching degree.

"It's not a scenario we hope for, but you know, we're in the context of a very real shortage, like several other boards, and unfortunately that's the reality," she said in a phone interview.

She said that number will likely decrease as the board hires new recruits, but that still means children will finish the year with a different teacher than they started with.

At the biggest school board, the Commission scolaire de Montreal, the teacher shortfall is even higher: chairwoman Catherine Harel Bourdon said Thursday they're still looking for more than 100 teachers a day after classes began.

On Thursday, the head of the province's largest teachers' unions warned that the number of students was expected to rise by 65,000 in the next five years while the number of teaching school graduates is declining.

"The conditions are right for the education network to experience a major crisis in the coming years," Sonia Ethier said.

She cited poor salaries and working conditions, a higher number of special needs students, looming retirement and burnout as reasons why the shortage is likely to increase.

The Quebec government recently promised to boost teachers' salaries, and previous spending cuts have been reversed to allow for the hiring of more specialists, who can help ease the burden on teachers.

But while the province contends with a teacher shortage, it also recently passed Bill 21, which prevents teachers and other public servants deemed to be in positions of authority from wearing religious symbols such as a hijab or turban on the job. (The restriction does not apply to people hired before the bill was introduced.)

Guillemette and Harel Bourdon both say it's too soon to know if they've lost candidates due to the legislation, but Harel Bourdon said it certainly doesn't help.

"For sure (the law) is coming in a context of a shortage," she said. Her board, which opposed the bill being applied to teachers, recently concluded it had no choice but to comply.

Guillemette says that immigration has led to a big jump in the number of students, many of whom don't speak French and need special welcome classes with a smaller teacher-to-student ratio.

That means boards have to compete for new teaching college graduates, who are increasingly selective in choosing what neighbourhood or school they want, and what clientele they want to teach.

"If we want to have them here, we have to give them a little bit the conditions they want," she said.

Harel Bourdon said that while there's no magic solution to the shortage, more can be done.

The lack of personnel has forced the board to hire unqualified substitute teachers — people who may have worked in relevant fields but don't have an education degree. Currently, the only way to become a full-time teacher is to complete a four-year bachelor of education — something Harel Bourdon said is too onerous for many working adults.

She'd like the government to develop an accelerated program that would allow people who already have a degree in another field, such as history or math, to enter the system more quickly.

The Marguerite-Bourgeoys school board is already experimenting with a project to train its substitutes and recruits through a distance-learning university.