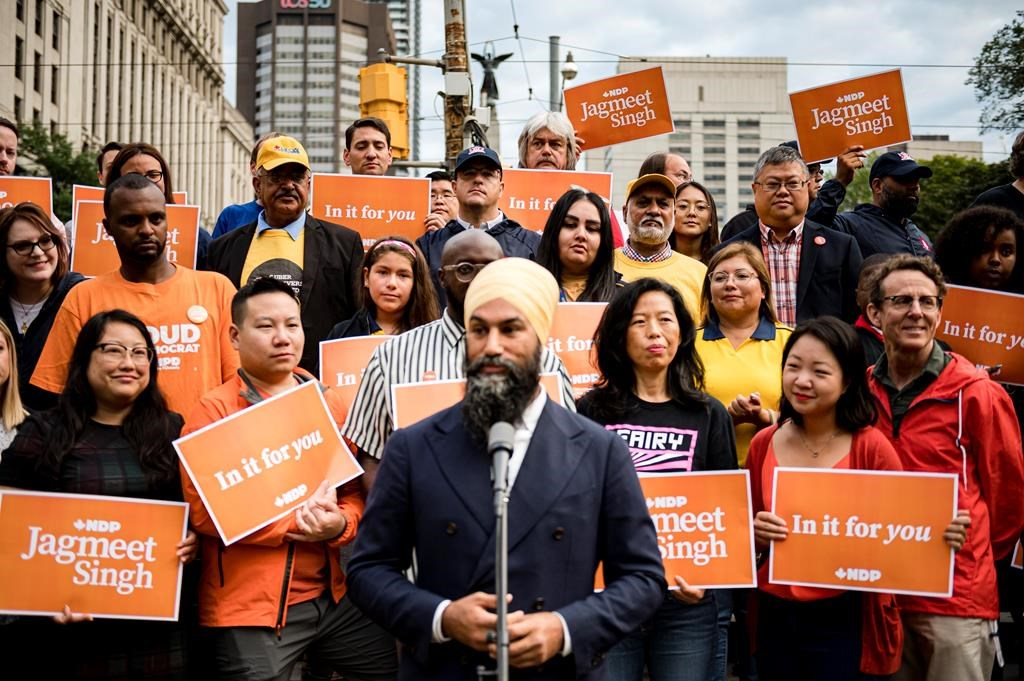 The federal New Democrats have settled on "In it for You" as their English slogan for the upcoming federal election campaign.

They're launching it with a new advertisement featuring leader Jagmeet Singh saying he's different from the other leaders. Not because he's the first visible-minority leader of a major party and wears a turban, but because he doesn't work for "the wealthy and the well-connected."

Instead, he says, he and the NDP believe "that government should work for all of us."

The New Democrats' slogan has some of the same direct appeal to voters' own interests as the Conservatives' "It's Time for You to Get Ahead," and Singh promises to tackle the cost of living in addition to health-care challenges and climate change.

The Liberals have announced that their slogan is "Choose Forward," meaning to contrast their vision with the Tories' promises to undo policies such as the carbon tax.

In his ad, Singh takes an apparent dig at the Liberals, promising that he'll do the right things, not just say them.

A French-language ad takes a slightly different tack, showing Singh winding his turban fabric around his head and boxing wraps around his hands, then laying into a heavy bag.

In a voiceover, Singh says, "Like you, I take pride in my identity." Scenes of him walking in the woods, bicycling, and marching in a gay-pride parade follow.

He talks about learning to fight for himself, and fighting for justice. The party's French slogan is "On se bat pour vous" — "We Fight for You."

You know the NDP, he says in French — now you know what I'm made of.

Under former leader Jack Layton, the New Democrats rode an "orange wave" in Quebec to Official Opposition status in 2011, but the party's support there has all but collapsed into single digits according to multiple recent polls. Singh will personally lead the party's efforts there in the imminent campaign, the party says.

The federal election is set for Oct. 21 and the parties are in full campaign mode, though Prime Minister Justin Trudeau hasn't yet visited the Governor General to formally begin the process.

I know this is reprinted from

I know this is reprinted from the Canadian Press; maybe you can make them aware there's another party -- the Greens -- running in this federal election. And, by all accounts, doing at least as well, if not better, than the NDP.