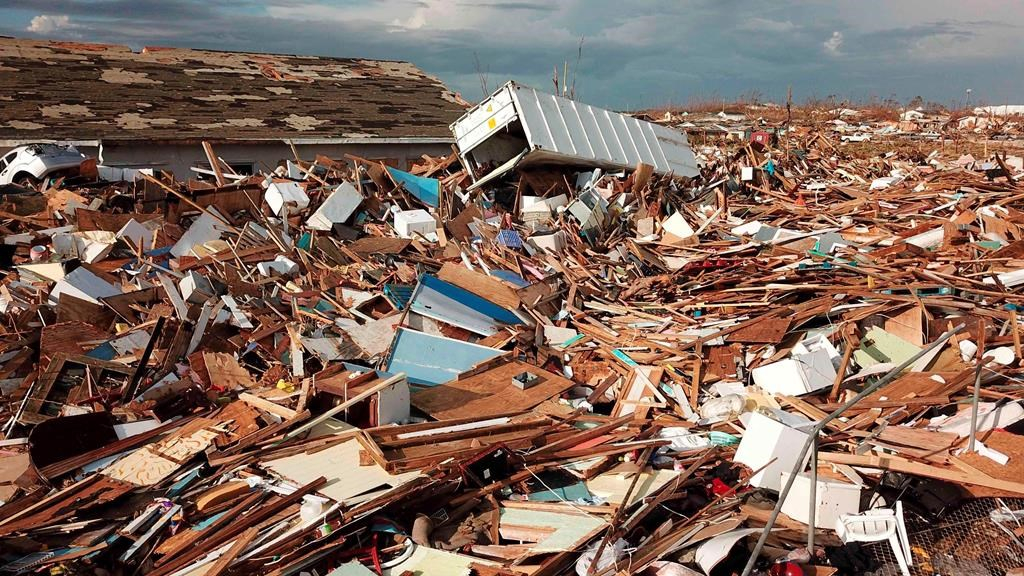 Extensive damage and destruction in the aftermath of Hurricane Dorian is seen in Abaco, Bahamas, on Thursday, Sept. 5, 2019. Photo by The Associated Press/Gonzalo Gaudenzi
Previous story
Next story

As Hurricane Dorian pushes northward, emergency and weather officials in Atlantic Canada warned Thursday against complacency ahead of the expected weekend arrival of the severe storm system.

The Category 2 hurricane lashed the southeast U.S. seaboard Thursday, reaching the coast of North Carolina where it knocked out power to more than 200,000 homes and businesses. Dorian has left at least 20 people dead in its wake in the Bahamas, including a Canadian woman from Windsor, Ont.

Linda Libby, an Environment Canada meteorologist, said Dorian is "certainly on its way" and that it remains to be seen whether the massive storm system will transition from tropical to post-tropical by the time it hit parts of Atlantic Canada sometime Saturday.

"We are looking at a large swath through Atlantic Canada and Quebec that could see impacts from Dorian," Libby said.

She warned that it was better for people to be prepared and underwhelmed by what arrives than to be under-prepared and unable to deal with what actually occurs.

"Even in a prepared situation, Mother Nature does have the capacity to overwhelm us," Libby said. "So being prepared to deal with what does occur is really the best approach to these storms."

The Canadian Hurricane Centre said the most likely track projection would bring Dorian south of the Maritimes on Saturday, pushing through eastern Nova Scotia late in the day.

The forecast called for severe winds and rainfall to have major impacts for southeastern New Brunswick, Prince Edward Island, Nova Scotia, western Newfoundland and Quebec's Lower North Shore, with a chance of a storm surge that may affect parts of Nova Scotia and Newfoundland.

The Nova Scotia Emergency Management Office (EMO) and Newfoundland and Labrador government cautioned that people should ensure they have enough food, water, medication and supplies for at least 72 hours.

Jason Mew, director of incident management with Nova Scotia's EMO, said municipal emergency response officials were being briefed across the province and that a provincial co-ordination centre would be up and running by Saturday morning.

The chief of emergency management at the Halifax Regional Municipality, Erica Fleck, urged people to start preparing for a potential hurricane, beginning with gathering up loose items in their yards and stowing them in sheds and other sheltered areas.

"Of course the track of the hurricane has been very unpredictable like most storms .... But what we're concerned about is the similarities to hurricane Juan when it hit Halifax some years ago," she said.

"Hurricane Dorian is a little less than that, but we're still concerned by the very high winds expected," she told reporters at a briefing at the city's emergency command centre.

Meanwhile, Nova Scotia Power said it was mobilizing close to 1,000 personnel and deploying resources in advance of the storm and would set up its emergency operations centre at noon Friday.

"Our preparations include bringing in several hundred power line technicians from Nova Scotia, New Brunswick, Ontario and Quebec," said the utility's president and CEO Karen Hutt, in a news release.

"As well, we will have forestry crews, planners, damage assessors, engineers, supervisors, communication experts, and customer care representatives at the ready."

ExxonMobil said it was planning to remove 160 personnel from the Thebaud natural gas field and from aboard the Noble Regina Allen drilling ship, working on Nova Scotia's Sable Offshore project. It said the ship would be placed in storm mode.

Environment Canada said the region would experience some tropical storm force winds, with wind speeds that could reach hurricane force to the south of the forecast track and the possibility of hurricane force northwesterly winds behind the storm.

Libby said as the storm system transitions to post-tropical it generally expands and picks up speed. That usually means the strongest winds would occur to the right of the system and the heaviest rain to the left of the track.

She said Dorian's winds would likely diminish over North Carolina's outer banks before heading north towards Canada but cautioned the storm would still pack a punch.

"It is expected to maintain hurricane strength as it makes landfall in Nova Scotia and even as it approaches Newfoundland," she said.

Forecasters warned of potential tree damage in particular, which could lead to power outages.

"Trees are still full of leaves here . . . so that means that essentially they are big sails and will catch the wind much more than they would in winter," said Libby. "The potential for tree damage cannot be diminished in this case."

She pointed out that trees aren't as firmly rooted as they are when the ground is frozen in winter, and that the ground had already been softened up by the heavy rains that accompanied post-tropical storm Erin only last week.

Rainfall this time around is also expected to be significant, with the highest amounts likely for Nova Scotia and the Gulf of St. Lawrence region, with the possibility of as much as 100 millimetres to the north and west of Dorian.

— With files from Michael Tutton in Halifax and the Associated Press

Keep guard up against hurricanes in 2019, as risk remains potent: forecaster

Hurricane Harvey debris dumped next to an African American community