Keep guard up against hurricanes in 2019, as risk remains potent: forecaster 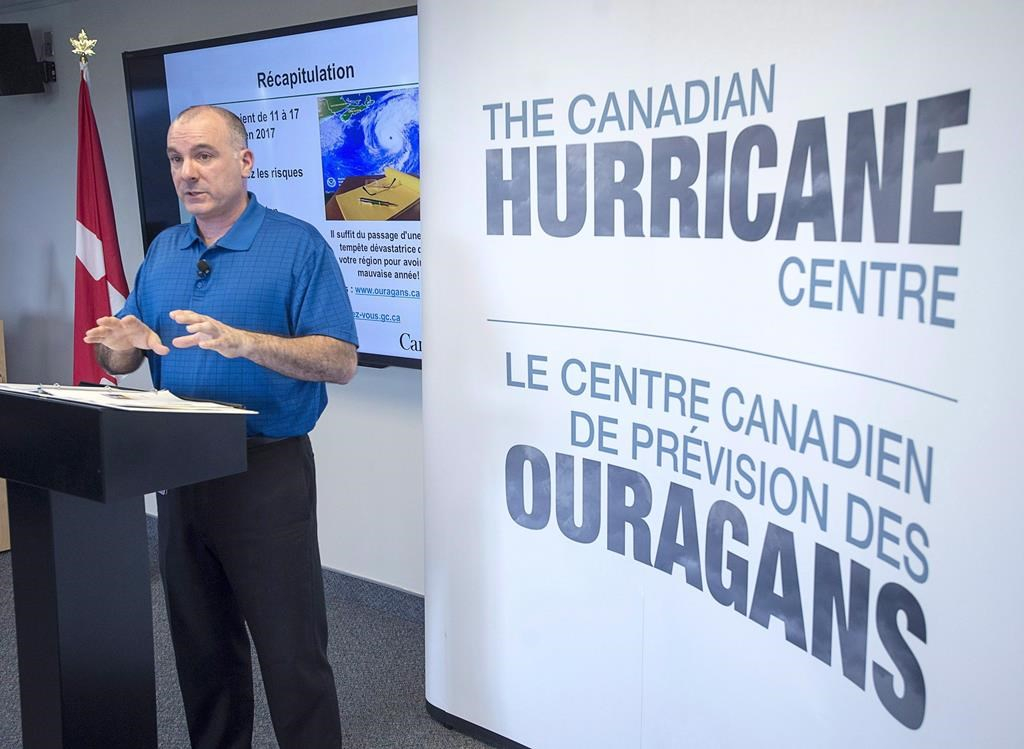 Meteorologist Bob Robichaud discusses the potential impacts of the upcoming 2017 hurricane season at the Canadian Hurricane Centre in Dartmouth, N.S. on May 25, 2017. File photo by The Canadian Press/Andrew Vaughan
Previous story
Next story

It has been years since a major tropical storm wreaked havoc in Canada, but the Canadian Hurricane Centre is warning against complacency.

The U.S. National Oceanic and Atmospheric Administration released its hurricane outlook Thursday, predicting nine to 15 named storms this season, with four to eight becoming hurricanes and two to four being major hurricanes.

Bob Robichaud of the Canadian centre noted that's similar to last year's hurricane season, when only two storms hit Canada, including post-tropical storm Chris, which made landfall in Newfoundland in July 2018.

However, Robichaud warns that some Atlantic Canadians may be forgetting storms like post-tropical storm Arthur, which snapped trees and caused massive power outages in 2014, and hurricane Juan's widespread wrath in 2003.

And he reminded journalists attending a briefing in Halifax about hurricane Michael, which flattened parts of the Florida panhandle last October.

The Halifax-based centre helped create Environment Canada's recently launched smart phone app WeatherCAN, and recommends people begin tracking storms as soon as they start and then monitor for shifts in direction and intensity.

"What we advocate is for people to really stay in tune with weather information because the forecast can change as the storms are approaching," Robichaud said.

Robichaud says studies show that complacency levels rise about seven years after a storm like hurricane Juan, and that as a result people do less to prepare.

"People tend not to take any preparedness action if they haven't had any kind of hurricane in recent years," said Robichaud, a warning preparedness meteorologist.

"For us it's been five years since any major impactful storm ... so it's even more important to take the necessary precautions to get ready."

The Intact Centre on Climate Adaptation at the University of Waterloo has published a simple guide for Canadians on basic measures to prepare in particular for flood risk from extreme weather.

The centre has repeatedly pointed out that without basic measures, basement flooding can cause tens of thousands of dollars in damage during hurricanes.

Its publications include a Home Flood Protection Program that begins with such simple steps as testing sump pumps, cleaning out eavestroughs and maintaining backwater valves.

More advanced measures include removing obstructions from basement drains and creating grading to move water away from homes.

The hurricane season runs from June 1 to early November.

Robichaud said hurricanes tend to "feed on" warmer waters, and as result the centre is closely monitoring those trends.

The meteorologist said as summer progresses it's projected the water will warm in the eastern Atlantic and become warmer than average.

In addition, Robichaud said the Atlantic Ocean continues to be in an overall period of high hurricane activity that hasn't yet come to the end of a cycle.