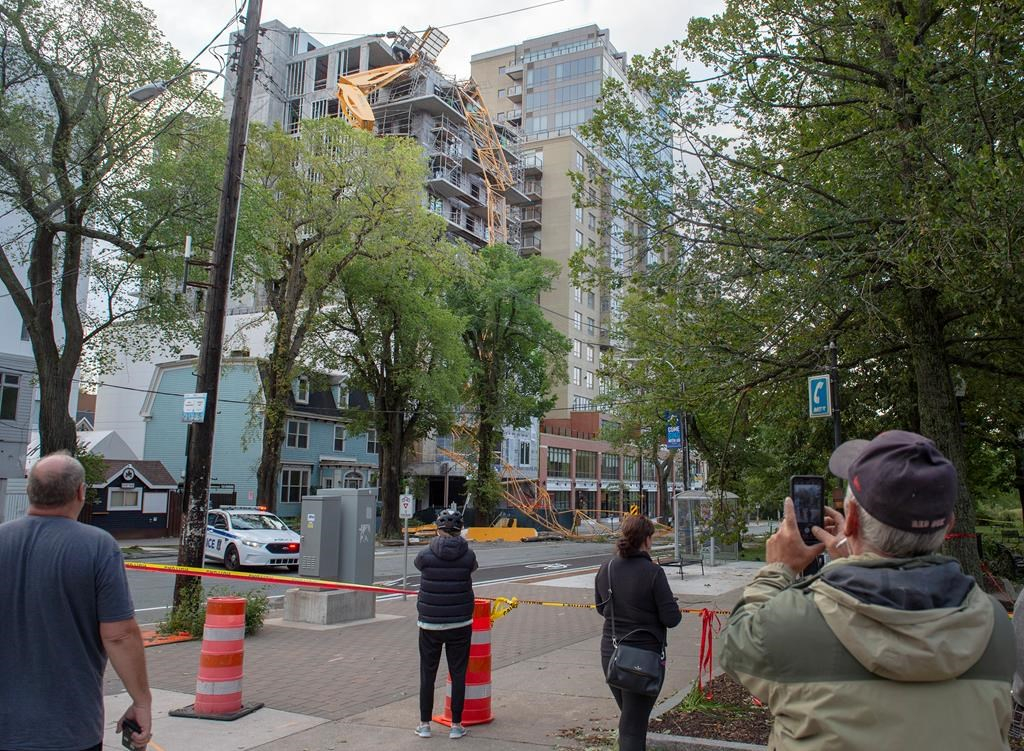 A toppled building crane is draped over a new construction project in Halifax on Sunday, Sept. 8, 2019. Photo by The Canadian Press/Andrew Vaughan
Previous story
Next story

A storm with hurricane-force winds that hit the Maritimes left more than 400,000 residents without electricity, as repairs began Sunday to downed power lines and buildings damaged by splintered trees.

Joseph Elias, 85, stood in the hallway of his home on his quiet residential street in Halifax, observing the aged oak that had toppled onto the house where he's lived for 25 years.

"When it (the storm) comes it's not easy; we don't know where it's going to hit," he said.

He and his wife Samira endured the 2003 Hurricane Juan, which left his street without power for two weeks, and now they face the aftermath of post-tropical storm Dorian.

"We were sitting down by the window and we heard a big bang and the tree fell in the front of our house and the roof," he recalled. "It's kind of hard to go outside the front door because there are branches all over it."

The remnants of the hurricane has caused downed foliage and flooding damage, while some streets saw more severe cases of uprooted trees that had fallen onto houses and cars.

The worst gusts of up to 150 kilometres per hour came late Saturday before the storm carried on over southern New Brunswick, Prince Edward Island and on to western Newfoundland.

Halifax appeared to have sustained a large portion of the damage, which included a collapsed construction crane in the downtown, a ripped up waterfront boardwalk and a badly damaged apartment complex, which lost its roof.

As of 10 a.m. Sunday, there were over 380,000 homes and businesses without power in Nova Scotia, with outages reported across the province. At one point, about 80 per cent of Nova Scotia's Power's customers were in the dark late Saturday.

In New Brunswick, more than 55,000 customers were still waiting for the power to come back on.

Prince Edward Island also had widespread outages, but Maritime Electric's website was down early in the day.

A spokeswoman for Nova Scotia Power described the hurricane as "one beast of a storm."

Andrea Anderson said Dorian knocked out service to more customers than any previous storm in the province.

She said about 1,000 personnel were working to restore power as soon as possible with additional teams called in from Quebec, Ontario, New Brunswick, Florida and Maine.

Anderson said most of the outages were caused by uprooted trees, fallen branches, powerful gusts and flooding.

Up to 700 Canadian Forces personnel were expected to fan out across the Maritimes to help restore electricity, clear roadways and evacuate residents in flooded areas.

Meanwhile, the west coast of Newfoundland and Labrador was bracing for heavy rain, strong winds, storm surges and large waves. Newfoundland Power said it was ready for the storm and would provide updates through an automated alert system.

There were no reports of injuries in the Maritimes, but dramatic footage shared on social media showed a large crane swaying in the wind and collapsing into the side of an empty apartment building under construction in downtown Halifax.

As Dorian closed in on the Maritimes, it strengthened to become a Category 2 hurricane with sustained winds reaching 160 km/h. But it weakened by the time it came ashore near Sambro, N.S., at 7:15 p.m. and was downgraded to a post-tropical storm.

Despite the apparent downgrade, Dorian continued to produce hurricane-force winds well above 120 km/h.