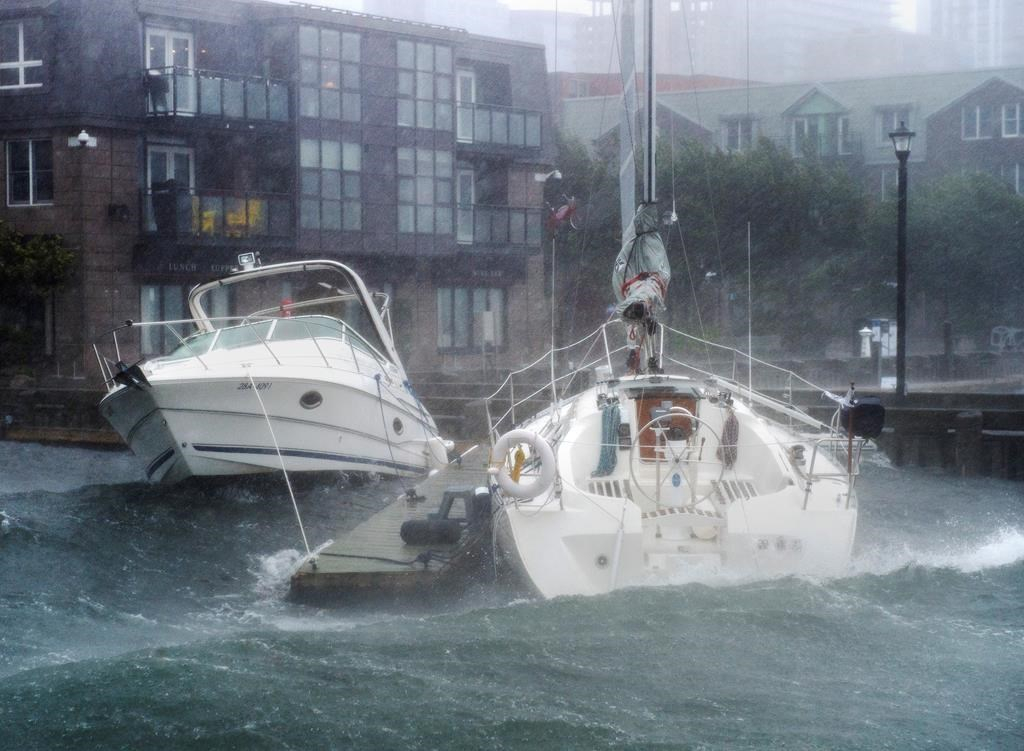 Pleasure boats take a beating along the waterfront in Halifax as hurricane Dorian approaches on Saturday, Sept. 7, 2019. Photo by The Canadian Press/Andrew Vaughan
Previous story

Dorian slammed into the Maritimes on Saturday, its powerful gusts uprooting trees, tearing off roofs and yanking down power lines — leaving more than 450,000 people in the dark as the post-tropical storm made landfall near Halifax.

Torrential rain, pounding surf and howling winds reaching up to 148 kilometres per hour were reported early in the evening, with the region's largest city appearing to suffer the most damage.

"The most thrilling part is seeing the mature trees swaying back and forth in the yard, and watching on social media as trees go down near neighbours' houses," said Tim Rissesco, who lives on the east side of Halifax harbour in Dartmouth.

"The power went out hours ago, but we were well prepared ... We've got snacks and food and we're hunkered down in the house playing board games and watching the rain and the wind."

There were no reports of injuries, but dramatic footage shared on social media shows a large construction crane swaying in the wind and collapsing into the side of an empty apartment building under construction in downtown Halifax.

In the city's south end, a roof was ripped off another apartment complex. As people hurried from the building, firefighter Jeff Paris said those forced from their homes would be taken to emergency shelters.

"There are several apartment buildings being evacuated," he said.

As the centre of the storm moved over the historic port city, the winds and rain subsided, but officials warned the storm was still packing a nasty punch.

"We're still talking about a very dangerous storm that is transiting through the Maritimes," Bob Robichaud, warning preparedness meteorologist with the Canadian Hurricane Centre in Halifax, told a late-evening news conference.

As Dorian closed in on the Maritimes, it strengthened to become a Category 2 hurricane with sustained winds reaching 160 km/h. However, the storm weakened by the time it came ashore near Sambro, N.S., at 7:15 p.m. and was downgraded to a post-tropical storm.

Despite the downgrade, Dorian continued to produce hurricane-force winds, well in excess of 120 km/h.

"There's a lot of live wires around ... Stay home. Stay off the roads."

A weather station at Osborne Head, which is just east of Halifax on the Atlantic coast, recorded a gust of 141 kilometres per hour at 4 p.m.

Nova Scotia Power Inc. reported more than 350,000 customers were in the dark by 7 p.m., including 170,000 in the Halifax area where the wind was gusting at over 100 kilometres per hour by late afternoon.

In Prince Edward Island, about 50,000 homes and businesses were without power a few hours later, as were another 74,000 in New Brunswick.

Halifax resident Karla Sonnichsen said she decided to wait out the storm at her parents' house in Dartmouth, where Dorian proceeded to push over trees and rip apart her father's shed.

"The trees were bending over like they were ready to snap, and two of the trees in front of the house are down," she said, adding that the shed shook and blew apart.

"We were out trying to batten that down and keep it together, but we were unsuccessful," she said. "We were out in the rain and wind, trying to do that in the middle of the storm ... We were running in the house with pieces."

Prime Minister Justin Trudeau posted on Twitter that the federal government was ready to help Atlantic Canada, and Public Safety Minister Ralph Goodale tweeted that the Canadian Armed Forces would be deployed to assist with recovery efforts.

The Canadian Forces later confirmed that up to 700 military personnel were preparing to deploy as early as Sunday morning to help restore electricity, clear roadways and evacuate residents in flooded areas.

Throughout the region, tennis fans took to Twitter to bemoan the fact that power outages had forcing them to miss the U.S. Open, where Canadian Bianca Andreescu won a historic matchup in the finals.

"I am dying of jealousy at everyone watching the U.S. Open," said one dejected fan. "Hurricane Dorian took my power hours ago. Scrolling with bated breath... "

Meanwhile, emergency officials in the Halifax region called for a voluntary evacuation of homes and businesses along the municipality's Atlantic shoreline.

"For the people that live out that way, we urge you ... to move yourself to someplace safe," said Erica Fleck, Halifax's assistant chief of community risk reduction.

Fleck said she was particularly concerned by reports that many residents and businesses had failed to secure loose objects ahead of the storm.

Some communities in western Nova Scotia and southern New Brunswick received more than 100 millimetres of rain.

Dorian was expected to move over P.E.I. and into the Gulf of St. Lawrence as a strong post-tropical storm.

Severe winds and torrential rain were in the forecast for western Newfoundland on Sunday.

In Halifax, residents were comparing the storm to hurricane Juan, a Category 2 hurricane that hit Halifax early on Sept. 29, 2003. It was blamed for causing eight deaths, six of them in Nova Scotia.

Juan roared through the middle of the province and over P.E.I., its sustained winds clocked at 157 km/h. As Juan's peak gusts hit 185 km/h to the east of the storm's centre, it uprooted millions of trees and caused more than $200 million in property damage.

Robichaud said Juan was stronger that Dorian, but the latest storm was much bigger.

—with files by Sidhartha Banerjee in Montreal.

By The Canadian Press in News, Politics | September 6th 2019

By The Canadian Press in News, Politics | September 5th 2019