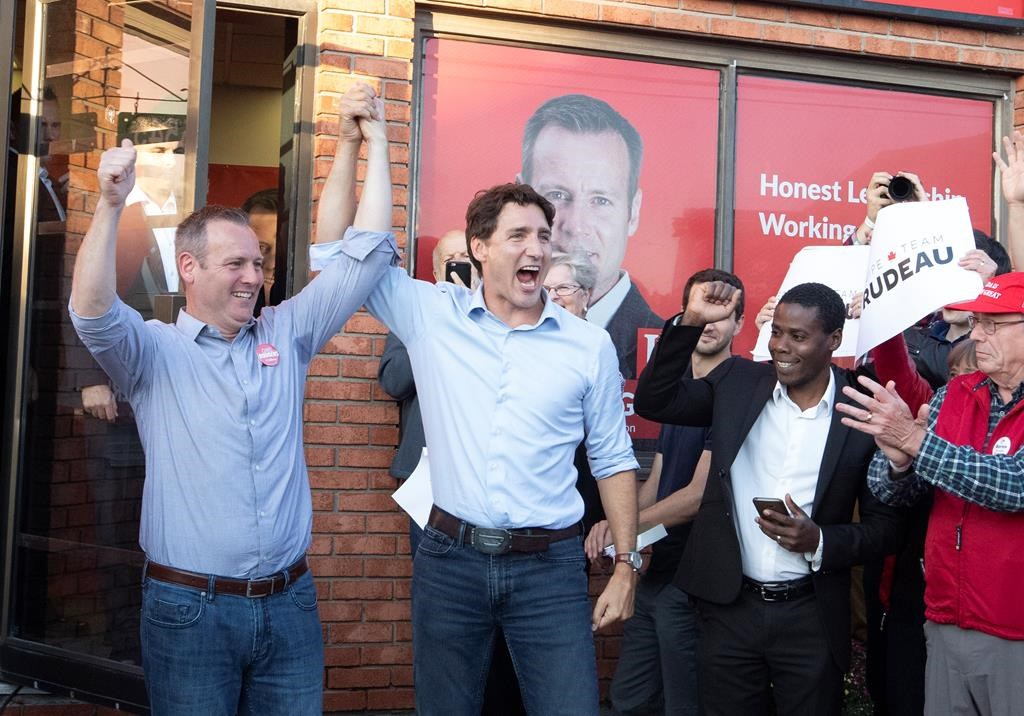 Justin Trudeau's Liberals and Andrew Scheer's Conservatives were running neck-and-neck during warm-up laps for the start of the 40-day federal election campaign, a new poll suggests.

It put Conservative support at 35 per cent nationally to the Liberals' 34 per cent — essentially a tie.

The NDP and Greens were also tied at 11 per cent, with Maxime Bernier's fledgling People's Party bringing up the rear with just three per cent.

The poll of 1,546 eligible voters selected from Leger's online panel was conducted Sept. 6-9. Internet-based surveys cannot be assigned a margin of error because online polls are not considered random samples.

The poll suggests the Liberals were ahead in Ontario and Quebec, the two provinces that account for almost 60 per cent of the 338 seats up for grabs, but the battle among the smaller parties could ultimately decide which of the two main parties wins the big prize.

In Quebec, the Liberals enjoyed the support of 37 per cent, well ahead of the Conservatives at 22 per cent, the Bloc Quebecois at 21 per cent, the Greens at 10 per cent, the NDP at six per cent and the People's Party at five per cent.

The Liberals are counting on making gains in the two largest provinces to compensate for losses elsewhere. But Leger executive vice-president Christian Bourque said Liberal hopes of cashing in on a possible NDP collapse in Quebec could be stymied by the Conservatives and the Bloc. Both were in the range needed to pick up seats in the province.

The Liberals were also leading comfortably in Atlantic Canada, with 53 per cent support compared to 28 per cent for the Conservatives, nine per cent for the NDP, seven for the Greens and three for the People's Party.

The Conservatives were the overwhelming favourites in Alberta and Manitoba/Saskatchewan, with 60 per cent and 57 per cent respectively — provinces where they already hold the vast majority of seats and have little to gain.

British Columbia was more of a toss-up, with the Conservatives at 36 per cent, the Liberals at 33, the NDP at 15, the Greens at 10 and the People's Party at four.

Twenty-six per cent of respondents said they're likely to change their minds before election day on Oct. 21, with supporters of smaller parties most likely to shift.

The poll suggests the Liberals still have hope of picking up Green and NDP supporters, although that's somewhat diminished by the fact that the Greens and NDP are now more likely to trade votes.

The Conservatives were the preferred second choice only of the small band of People's Party supporters (40 per cent).

The national numbers suggest that on the eve of the election call, neither the Liberals nor the Conservatives were in position to win a majority of seats and that the Tories, with the least potential for second choice votes, face the hardest climb to get a majority.

Asked to choose the two most important issues that will determine which party they'll support, 35 per cent picked the level of income taxation. Another 35 per cent chose job creation and economic growth and 30 per cent chose fighting climate change. Public finances, debt and seniors issues followed with 20 per cent each. Nineteen per cent named fighting poverty as a top issue and 17 per cent named immigration.