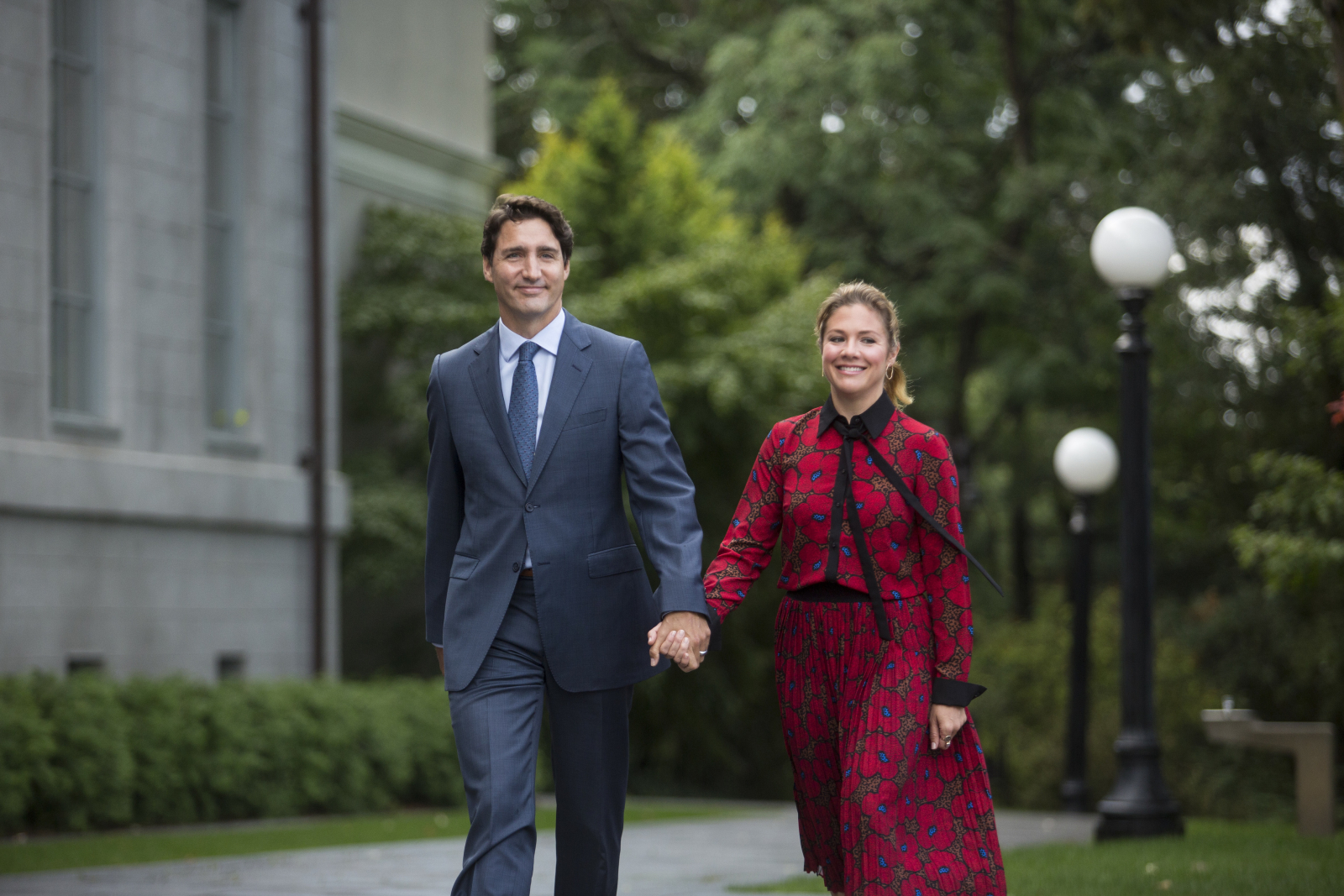 Prime Minister Justin Trudeau and his wife, Sophie Grégoire Trudeau, walk toward the entrance of Rideau Hall in Ottawa on Sept. 11, 2019, to ask the Governor General to dissolve Parliament, setting up the 2019 federal election. Photo by Andrew Meade
Previous story
Next story

Justin Trudeau fielded the first question he received after setting in motion Canada’s 43rd general election Wednesday morning with one of the most abbreviated responses he could possibly give.

The prime minister and his wife, Sophie Grégoire Trudeau, had just visited with Gov. Gen. Julie Payette at Rideau Hall in Ottawa to ask to dissolve Parliament and launch the election, scheduled for Oct. 21.

In the courtyard outside, he was asked by a Globe and Mail reporter about her newspaper’s story, from a day earlier, that said the RCMP had been "stymied" in its examination of potential obstruction of justice in the SNC-Lavalin affair due to the government’s “refusal” to fully lift the veil of secrets around the cabinet table.

“We gave out the largest and most expansive waiver of cabinet confidence in Canada’s history,” Trudeau answered, and then he stopped.

For several seconds, no one spoke. Reporters had evidently been expecting a longer response.

Eventually, someone said, “En français?” which is what TV and radio journalists in the Parliamentary Press Gallery say when they need a French version of an English comment.

Trudeau and the Liberal Party are entering the 2019 fall election campaign with many believing the government has delivered on some core promises. But others are dismayed by the baggage accumulated after four years in office.

One of the largest pieces of luggage has been the SNC-Lavalin affair, the controversy surrounding Trudeau's having pressured his former attorney general, Jody Wilson-Raybould, to help the engineering and construction giant avoid a criminal trial over fraud and bribery charges.

The Liberals have maintained that the decision to keep some SNC-related cabinet discussions secret was made by the non-partisan public service, specifically the Clerk of the Privy Council, on the basis of cabinet confidence, a privilege afforded under the law to sitting governments.

The government waived a certain degree of this privilege early on in the scandal so that Wilson-Raybould and others connected with her could be permitted to talk with the justice committee and the ethics commissioner about certain aspects of the story.

The Liberals say that permission slip was plenty. Yet, as the Globe and Mail story points out, it wasn’t enough for the ethics commissioner, who noted in his report into the affair some witnesses couldn’t provide their full testimony.

Trudeau’s quick response Wednesday, as he prepared to kick off his re-election campaign later in the day, showed that those hoping he would eventually provide a more thorough reflection on the pros and cons of cabinet confidences will likely be disappointed.

Trudeau spent the majority of his speech following his meeting with the Governor General outlining what he sees as his government’s progress after four years and laying out what he characterized as a stark choice facing Canadians this election.

He began with a short tribute to the victims of the 9/11 attacks in the United States, as a nod to the campaign’s kickoff on the anniversary date. “May their memories be a blessing to us all,” he said.

He then quickly pivoted to framing for Canadians how he wants them to see his main rival in this election, Conservative Leader Andrew Scheer: as Stephen Harper 2.0.

“In 2015, after a decade of failed Conservative policy, Canada’s economy was flat. Economic growth, job creation, wage growth, all were stalled thanks to a Conservative government that believed cuts and austerity were the answer to everything,” Trudeau said.

“Canadians have an important choice to make. Will we go back to the failed policies of the past, or will we continue to move forward? That’s the choice. It’s that clear and it’s that important.”

“We have made the case that he has lost the moral authority to govern,” the Tory leader said. Scheer had called on Trudeau to resign as prime minister back in February, after Wilson-Raybould had delivered her testimony to the committee.

Soon after, Scheer headed to Trois-Rivières, Que., to kick off his campaign, while Trudeau also boarded a plane, flying to the West Coast to continue his fledgling campaign in Vancouver.

I would suggest that some

I would suggest that some other failings and disappointing violations of trust on behalf of these elected officials are: the purchase of the Trans Mountain pipeline in the face of a climate emergency and the refusal to fulfil the promise of electoral reform - the end of Forst Past The Post. I could go one but trust that fellow readers know as well there are others. It is not only SNC relationship that sours their record in service.