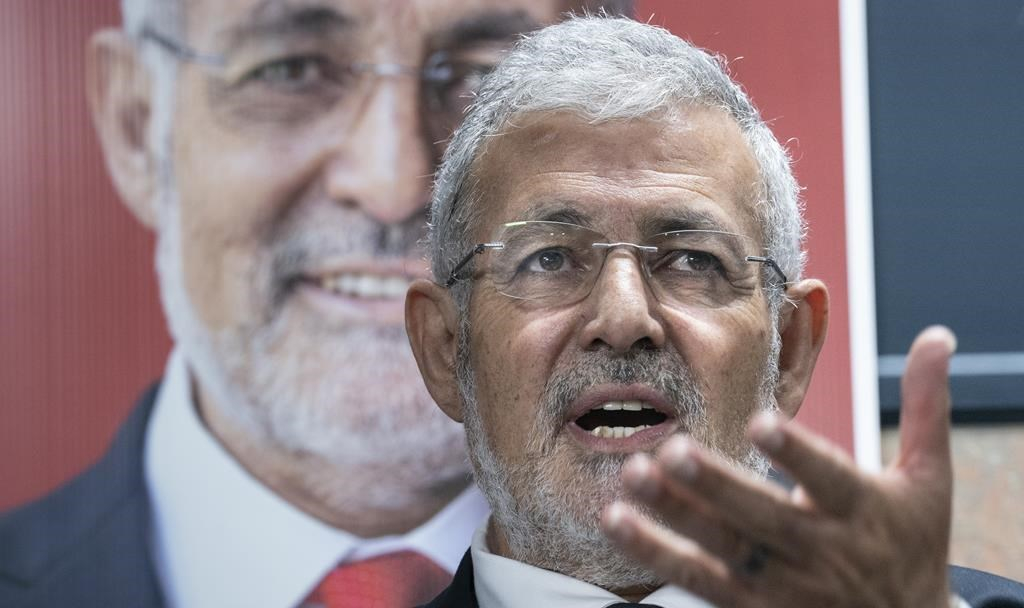 Imam Hassan Guillet, who has been dropped by the Liberal party as a candidate, responds to a question during a news conference in Montreal on Wednesday, Sept. 4, 2019. File photo by The Canadian Press/Paul Chiasson
Previous story
Next story

The federal party leaders have spent the first days of the election campaign talking policy, as they'd like, and dismissing and defending candidates over old social-media posts, which they'd rather not.

"I'd like to hear from Justin Trudeau why people who hold anti-Semitic views feel that their home is in the Liberal Party of Canada," Scheer said Friday in Mississauga, Ont., after making an announcement about public transit.

Scheer grappled with questions about past controversial statements by his own candidates — one who was fired, and two who apologized and remain with the Conservative team.

Last month, the Liberals dropped Hassan Guillet as a candidate in the Montreal riding of Saint-Leonard-Saint-Michel after B'nai Brith Canada, a Jewish advocacy group, uncovered a series of old statements he made on social media that B'nai Brith described as anti-Israel and anti-Semitic.

Guillet later told reporters that he had discussed the old posts earlier that month with Liberal party officials, who reassured him they were convinced he was neither racist nor anti-Semitic.

The former imam also said he and the Liberals discussed a plan to head off any negative publicity should the posts be discovered, but when they were, he ended up being ejected as a candidate instead.

"(Trudeau) has refused to explain why he was working to keep those anti-Semitic messages hidden from the public and from Canadians," Scheer said.

The Liberal party has said Guillet's comments do not correspond to the party's values. The party has not answered questions about when Liberal officials first learned of the posts.

Scheer brought up Guillet after responding to questions about troubling past statements by his own candidates.

Liberal candidate Ruby Sahota, who is seeking re-election in Brampton North, issued a tweet on Friday showing a Facebook comment from 2010 in which her Conservative rival, Arpan Khanna offhandedly used a homophobic slur apparently to tease a friend.

"I deeply regret the offensive language I used when I was a teenager," Khanna, with whom Scheer campaigned in Brampton on Friday night, said in a statement sent by a Conservative party spokesman.

"Over the past decade, I have come to understand that creating safer and more inclusive spaces for LGBTQ+ people in Canada happens in our homes, workplaces, on social media, and in the conversations we have every day," he said. "I apologize unequivocally."

Last month, the National Council of Canadian Muslims called on the Conservatives to drop Ghada Melek, who is running in Mississauga-Streetsville, over past social media posts they said were anti-Islam.

Melek has also apologized, saying that as a Coptic-Christian who cares for her homeland of Egypt, she allowed her passion to rule her in 2013.

"While these are almost entirely retweets from more than half a decade ago, I do understand how some of them may be offensive, and I do regret that as well as retweeting them," she said in a statement issued alongside the one from Khanna. "I will always stand with Muslim-Canadians."

The National Council of Canadian Muslims also suggested she endorsed a speaker who supports conversion therapy for LGBTQ people.

She said the online activity in question was actually in support of Ontario's review of its elementary-school health curriculum, over allegations it was too blunt about some topics with children who are too young to hear about them.

"As an MP, I will represent all of my constituents, including the LGBTQ community," she said in the statement. "I absolutely oppose any so-called therapy or treatment that forces someone to try and change their sexual orientation against their will."

Both of those candidates are still running for the Conservatives and when asked about that Friday, Scheer said they had apologized.

"It's clear that the language they used was unacceptable and offensive to the LGBT community, so I'm glad they apologized," Scheer said.

Shortly before a leaders' debate began Thursday night, the Conservatives announced they had dumped their candidate in Winnipeg North, Cameron Ogilvie, over "discriminatory social media posts." The party said he had kept the messages from view during the vetting process.

"The candidate in Winnipeg North hid those messages from the party, so we asked him to resign and we will have a new candidate in that riding," Scheer said when asked about it Friday.

Ogilvie declined to comment when reached by telephone Friday.

Rejean Hebert, who is running for the Liberals in Trois-Rivieres, Que., was also asked about his very public past as a health minister in the Parti Quebecois government of former Quebec premier Pauline Marois.

Hebert told reporters he now believes Quebec is better off within Canada and that those in the province should focus on bigger priorities.

"I wouldn't have joined the Liberal party if I hadn't turned the page on the issue of Quebec sovereignty," he said Friday.

The Green Party, meanwhile, does have a candidate who remains an avowed sovereigntist.

Pierre Nantel, who was elected as an NDP MP in 2011 and 2015 but jumped to the Greens this summer, confirmed his current support for the movement on Thursday. On Friday, Green party Leader Elizabeth May said he would remain a party member and candidate.

However, May told CBC that the party is "re-vetting" another candidate — Mark Vercouteren in the southwestern Ontario riding of Chatham-Kent—Leamington — who as recently as last year expressed blanket opposition to a woman's right to choose to have an abortion, contrary to Green party policy.

Meanwhile, the People's Party of Canada also dropped one of its candidates in British Columbia.

Brian Misera, who was the candidate for Coquitlam-Port Coquitlam, said on Twitter on Thursday that the party had sent him an email to revoke his status, which came a day after Misera posted a video on Twitter urging party leader Maxime Bernier to speak out more clearly against racism.

"If you can't be adamantly clear about that, I don't know how the hell you expect me to campaign for you," said Misera.

The same video also said he wished Bernier understood that not every member of his party is skeptical of climate change.

Johanne Mennie, executive director of the People's Party of Canada, said in an email Friday that Misera's candidacy was revoked because he said he was acting as the financial agent for his own campaign, which she claimed is against Elections Canada rules.

However, a spokesman for Elections Canada said that while it is unusual for a candidate to be his own financial agent, it is not actually against the rules.

The Conservatives, NDP and Greens returned to their national tours after an evening spent sparring in Toronto, while Trudeau picked up his campaign in Quebec.

Trudeau began his morning by promising a suite of policies aimed at helping small businesses, including eliminating a portion of so-called "swipe fees" that merchants must pay to credit-card companies on each transaction. The Liberals would stop credit-card companies from charging that percentage on sales taxes.

NDP Leader Jagmeet Singh was in Toronto, where he promised to put a price cap on cellphone and internet services, part of a campaign platform aimed at voters worried about being able to afford the things they need in their everyday lives.

Scheer, meanwhile, campaigned in and around the Toronto suburbs, kicking off the day at a bus garage in Mississauga. He promised to bring back the public-transit tax credit, a policy from the Stephen Harper era that's now a core element of the Tories' environmental plan.

May headed back to family — joining her new husband, and fellow candidate, John Kidder for an event in the B.C. riding where he's seeking a seat. Kidder is running in Mission-Matsqui-Fraser Canyon, a riding that sprawls in a vast crescent northeast of Vancouver.