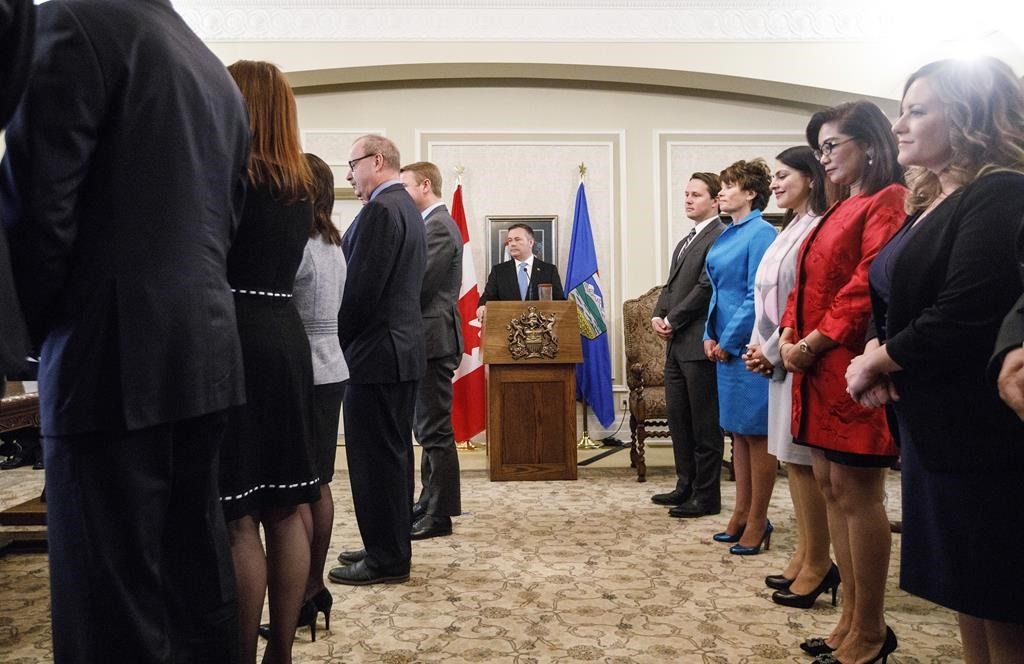 Alberta Premier Jason Kenney watches as his cabinet is sworn into office in Edmonton on Tuesday, April 30, 2019. File photo by The Canadian Press/Jason Franson
Previous story
Next story

Alberta's United Conservative government plans to eliminate its stand-alone offices for climate change policy and environmental monitoring, a move some say will damage the province's standing and its ability to make science-based plans.

"What's going to suffer is Alberta's international reputation (and) our overall approach to science and evidence-based decision making," said New Democrat legislature member Shannon Phillips, who was environment minister in the previous government.

The intention is outlined in a Sept. 10 email from Alberta Environment and Parks deputy minister Bev Yee, obtained by The Canadian Press.

Yee outlines a departmental re-organization under which the climate change office created during Phillips' tenure will disappear. So will the environmental monitoring and science division, initially created as an arm's-length agency in 2014 by the provincial Conservative government and brought back into government by the New Democrats.

Both will be "integrated into the new structure," says Yee's email.

"The primary drivers and intended outcomes of this reorganization include enhanced business integration, the achievement of efficiencies, and providing better support to achieve government priorities," wrote Yee.

The changes are to be effective Oct. 15.

Yee said in an emailed statement Friday that the process is about increasing effectiveness.

"This reorganization will bring many of the department's brightest scientific minds under one division and eliminate some of the administrative overlap that can prevent them from doing their best work."

In an email, department spokeswoman Jess Sinclair said the climate change office has been incorporated into Alberta Environment's general policy effort "in order to ensure that (department) policy is developed with an eye to the overall management of pollution in the province."

But Phillips said the moves downgrade both climate and monitoring policy.

"We no longer have a government that is interested in putting forward credible climate change policy or credible monitoring and science in the oilsands," she said. "I have serious questions about the resourcing of environmental monitoring in the oilsands."

Phillips suggested the change is a prelude to cuts.

"It's easier to hide the cuts if they're absorbed within the department."

Environmental groups called the changes part of a pattern in Jason Kenney's United Conservative government to roll back climate and environmental policies.

"If this government didn't have a very clear agenda to stall climate action and harass environmental organizations, then I might be willing to consider this normal operations for a new government," said Catherine Abreu of Climate Action Network Canada.

"(But) I can't help but see the elimination of their climate department as part of their overall strategy."

Since taking office in April, the Kenney government has eliminated Alberta's carbon tax, cancelled programs encouraging renewable energy, launched a $30-million "war room" to fight what it calls misinformation and started a $2.5-million inquiry into an alleged conspiracy to landlock Alberta oil.

“We continue to try to work with the government of Alberta," said Duncan Kenyon of the Pembina Institute, an Alberta-based clean energy think-tank. "But since taking office, every decision they have made on climate change will result in increased pollution."

"This is what climate denial looks like when it's in power," said Keith Stewart of Greenpeace in an email. "Disappearing the division won't make the climate crisis go away."

Sinclair said the moves are not an attempt to do less on environmental issues.

"Emissions management is a priority for this government," she said.

It is disheartening to see

It is disheartening to see the government of my youth descend on no less than an official basis into disrespectful and possibly illegal assaults on the character of its critics. This is surely a sign of weakness and insecurity, and perhaps diversion. Moreover, it is delusional to attribute the decrease in the world price of oil to some kind of environmental conspiracy funded by foreigners to an infinitesimal level compared to Alberta’s vast foreign ownership of the oil industry. It doesn’t take more than a pinch of reason to see the true motive here, namely to silence these same critics who clearly touched an exposed nerve.

The Globe and Mail published a feature editorial in the September 14 edition that called out Jason Kenney’s use of millions in taxpayer’s money to gag the constitutional right to freedom of speech of the critics (which equally applies to industry proponents) instead of engaging in an adult conversation about the laws of physics that underpin life itself and the shaky characteristics of extractive economies.

Jason Kenny is not Peter Lougheed. The latter was a far superior leader who possessed a calmer, more rational intellect not stained by abhorrent ideology. Lougheed would be appalled by small minded tactics like these, let alone their funding with public dollars. Lougheed defined Alberta’s oil from the start as the people’s resource, and that approach was maintained throughout his leadership and into the next with a decent return in royalty revenue. Lougheed also negotiated the 1982 Canadian Constitution with the elder Trudeau. Royalties have been in descent by orders of magnitude ever since, along with Alberta’s economic and environmental policy initiatives as Big Oil burrowed into the provincial government so deeply that industry and government personnel was interchangeable right up the rise of the NDP, who quickly decided to maintain the status quo with a few ineffective tweaks as a sop in title only to climate change.

Notley and Kenney are birds of a feather on the fossil fuel file and share a penchant for hubris and desperate insults directed to their neighbour, BC premier John Horgan, who is disturbed by the risk to the coast presented by 750,000 barrels of diluted bitumen carried in every tanker. Notley and Kenny have just one chief difference in governance: social policy.

And so it has come to this, a populist leadership more enamoured with its political base than the law of the land, finding a path to create a healthier and more diverse economy, and holding even a gram of concern for the condition of the planet.