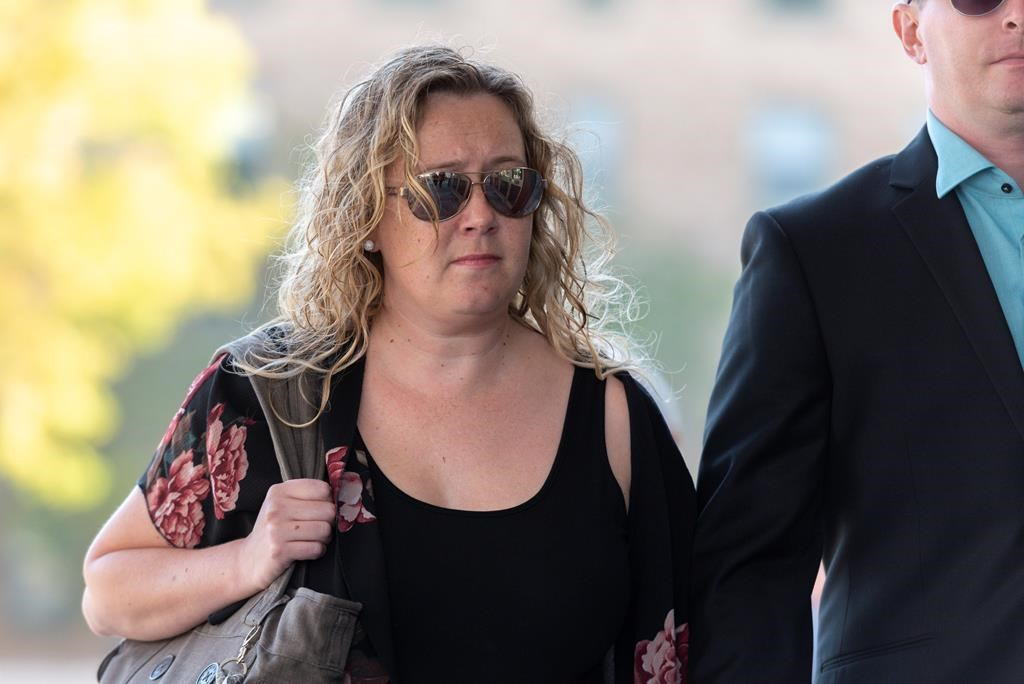 Carolyn Strom, left, arrives at the Court of Appeal for Saskatchewan in Regina, Saskatchewan on Tuesday, September 17, 2019. Photo by The Canadian Press/Michael Bell
Previous story

Saskatchewan's highest court is to decide what's next for a registered nurse who was fined $26,000 for criticizing her grandfather's care on Facebook.

Carolyn Strom from Prince Albert, Sask., was found guilty of professional misconduct by the Saskatchewan Registered Nurses Association in 2016.

She has asked the province's Court of Appeal to quash the disciplinary decision and fine. A panel of three judges heard arguments on Tuesday and reserved its ruling.

"It's not right, everything that's happened," Strom, becoming visibly emotional, said outside court with her family.

Strom, who's still working as a nurse but on reduced hours, said she's hoping for a just decision. The experience has made her question being a nurse, she said, and has caused her and her family stress.

"There's no way I could have ever of known this was going to happen," she said.

"I will always stand up for my family, and so I don't regret standing up for them."

Lawyers representing Strom and the nurses association painted very different pictures of how her Facebook comments should be regarded.

The association's lawyer argued Strom personally attacked an identifiable group without attempting to get all the facts about her grandfather's care.

Strom's lawyer said all his client did was make some staff members uncomfortable while exercising her right to freedom of expression.

"Ms. Strom is guilty of nothing more serious than that," Marcus Davies told the court. "Apparently, she made an institution and some who worked there uncomfortable."

In February 2015, weeks after her grandfather died, Strom wrote on Facebook that some unnamed staff at his long-term care facility in Macklin, Sask., were not up to speed on delivering end-of-life care. She also identified herself as a registered nurse.

"I challenge the people involved in decision making with that facility, to please get All Your Staff a refresher on the topic And More … to those who made Grandpa’s last years less than desirable, Please Do Better Next Time!" one comment read.

Strom's lawyer called the complaint against Strom manufactured and noted that the facility's executive director made a photocopy of the nurse's comments and circulated it among staff.

He also argued that the disciplinary committee made many errors, including misquoting legal decisions and misrepresenting the outcomes of cases it relied on to reach its decision.

Roger Lepage, representing the nurses association, told court that Strom's comments were beyond protection as freedom of expression, because they contained serious allegations against an identifiable group.

He said her comments also couldn't be considered debate, because the facility's health-care workers couldn't respond publicly about the specific care of a patient.

"What she was engaging in was a one-sided attack on the reputation of a facility and an identifiable group of health workers."

Lepage said a nurse who takes to social media to criticize care and damages an institution's reputation without seeking to get all the facts first should be disciplined.

The Saskatchewan Union of Nurses, Canadian Constitution Foundation and the BC Civil Liberties Association intervened in the case.

Lepage rejected their arguments that nurses are being muzzled and that the discipline against Strom sends a warning to health-care workers about speaking out.

"What is true is that Canadians would be harmed if nurses could just say what they want about medical establishments based on how they feel that day," Lepage argued.

He called Strom's comments on Facebook "fake news," but that was challenged by the judges, who noted Strom's claims about the facility have not been proven false.

The nurses union said the action against Strom has lowered the bar for a finding of professional misconduct.

"If this ruling is upheld and her $26,000 fine is upheld, it's really sending a message that you can't criticize anything about the health-care system if you are a nurse," added Megan Tweedie, a lawyer for the civil liberties group.