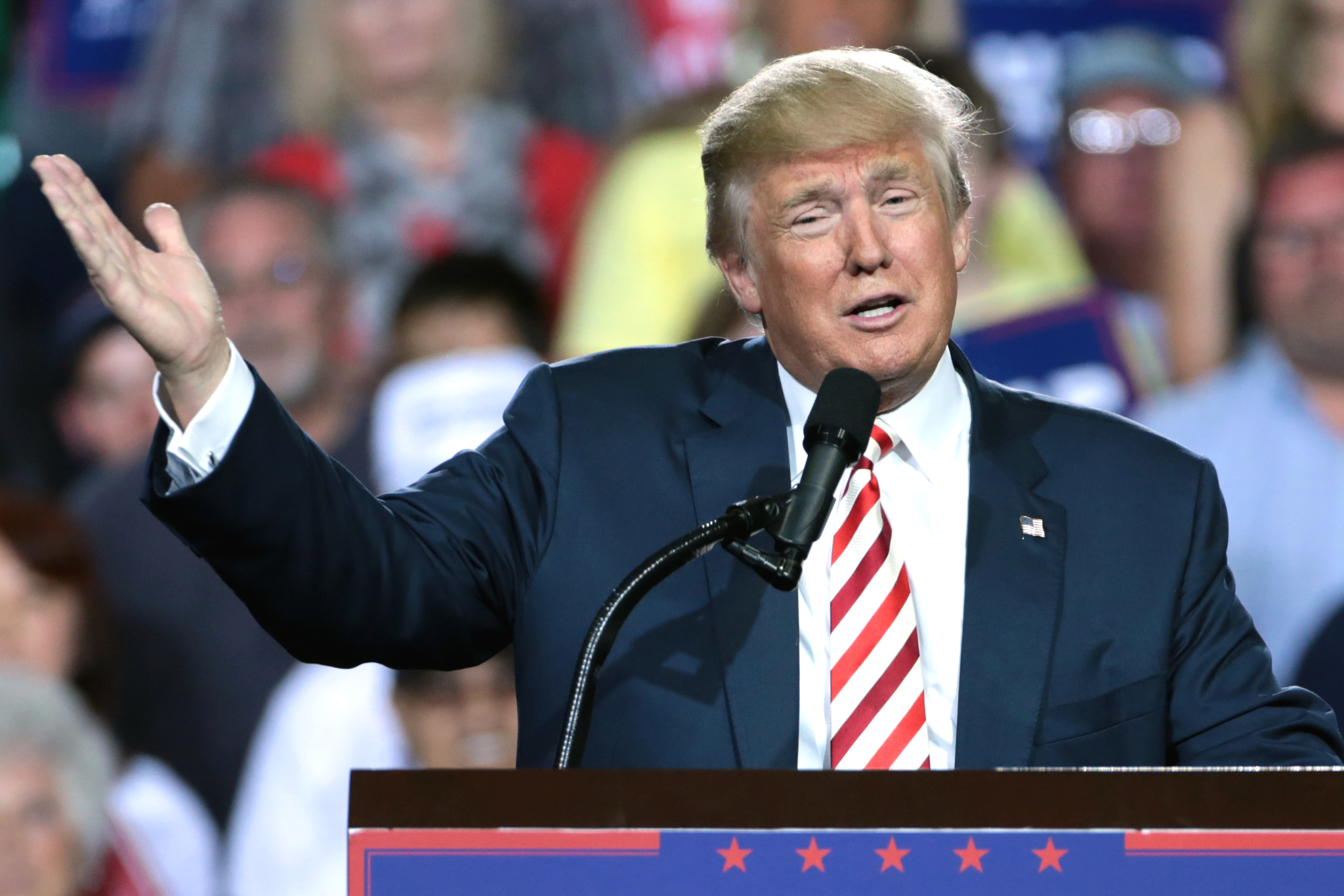 Donald Trump speaking with supporters at a campaign rally at the Prescott Valley Event Center in Prescott Valley, Arizona on October 4, 2016. Photo by Gage Skidmore/Flickr
Previous story
Next story

This story originally appeared in the Nation. It is republished here as part of the National Observer's partnership with Covering Climate Now, a global collaboration of more than 250 news outlets to strengthen coverage of the climate story.

As world leaders converge on New York City for the United Nations climate action Summit on 23 September, they enter what may be the most consequential week in climate politics since Donald Trump’s surprise election as president of the United States in 2016. Trump, of course, announced soon after taking office that he was withdrawing the US from the Paris agreement, the landmark treaty signed at the last big UN climate summit in 2015. António Guterres, the UN secretary general, convened this week’s summit precisely because the US and most other countries remain far from honoring their Paris pledges to reduce heat-trapping emissions enough to prevent catastrophic climate disruption.

The events of the coming days – including a global climate strike on 20 September by the activists whose protests in the past year have pushed the term “climate emergency” into news reports around the world – may help answer a question that has loomed over humanity since Trump’s election: can the rest of the world save itself from climate breakdown if the richest, most powerful nation on earth is pulling in the opposite direction?

Adopted in December 2015, the Paris agreement stands as the strongest achievement of climate diplomacy since governments first debated the issue at the UN Earth Summit in 1992. In a shock to climate insiders, the agreement not only committed signatory governments to limit temperature rise to the relatively less dangerous level of 2C. It also obliged governments to keep temperature rise “well below” 2C and, in a major victory for the most vulnerable countries, to strive for 1.5C. That half-degree may not sound like much, but it spells the difference between life and death for low-lying coastal nations such as Bangladesh and island states such as the Maldives – two of many places that, science says, would literally disappear beneath the waves with more than 1.5C of warming.

The announced US withdrawal from the Paris agreement was big news but also widely misunderstood news. Despite Trump’s bluster, the US withdrawal still has not happened. Precisely to guard against such capriciousness, the negotiators in Paris stipulated that every signatory was legally bound to remain in the agreement until four years after the treaty took effect, which would only happen after countries responsible for 55% of global greenhouse gas emissions ratified it. Thus, the Paris agreement did not take effect until 4 November 2016. That means the US cannot leave until 4 November 2020 – which, not by accident, is one day after the US 2020 presidential election. If Trump loses that election, his successor almost certainly would move to keep the US in the Paris agreement.

Trump is not expected to attend this week’s summit; the US delegation will instead be led by Andrew Wheeler, a former coal company lobbyist who is now the administrator of the Environmental Protection Agency. In keeping with Trump’s denial of climate science and his administration’s dismantling of environmental regulations and accelerating of fossil fuel development, Wheeler testified to the US Senate last January that he would not call climate change “the greatest crisis” facing humanity.

Which highlights a question that may shape whether this summit turns out to be a success, a failure, or something in between. What role will the US play? Will it be a spoiler, actively seeking to disrupt progress? Will it be a braggart who, as Wheeler boasted (inaccurately) in that testimony, represents “the gold standard for environmental progress”? Or will it be more like the addled uncle at the family reunion whose babblings provoke eye-rolls and are ignored?

“Don’t bring a speech, bring a plan!” For months now, that’s what Guterres has been telling heads of state and government. Instead of the endless blah-blah-blah heard at most UN meetings, Guterres wants this summit to be more like “show-and-tell”, a meeting where governments share concrete and replicable examples of how they are cutting emissions and boosting resilience to the climate impacts already unfolding. As such, the summit aims to address a glaring deficiency of the Paris agreement. In part, because the agreement made emissions cuts voluntary, global emissions have continued to increase since 2015. On current trends, the earth is heading towards 3-5C of temperature rise – enough, scientists warn, to destroy civilization as we know it.

“The secretary general has very clearly demanded that all participants identify very concrete measures that can be implemented immediately,” Luis Alfonso de Alba, Guterres’s special envoy for the summit, said in an interview with Covering Climate Now, a collaboration of 250 news outlets around the world to strengthen coverage of the climate story. “What we need is for all actors to put in practice their commitments [and to] recognize that whatever they had in mind before, they need to do much more – because climate change is running faster than we are, the situation is much more serious than we thought.”

Asked how the world can meet the “well below 2C” target when the current US government is doing all it can to increase global warming, Alba, a career diplomat from Mexico, steered clear of criticizing the Trump administration. “We need higher political will not only in one country but in a number of them,” he said, before adding: “We’re very much impressed by what states, cities and businesses are doing in the US to move into renewables … We are quite confident that the US will contribute to solutions, even if the decision to withdraw by the current administration is maintained.”

Indeed, then governor Jerry Brown announced at a climate summit last September that he signed an executive order committing California, the world’s fifth-biggest economy, to achieve zero carbon emissions by 2045. This summer, New York state, whose economic output is roughly equivalent to Russia’s, passed a law requiring the state to achieve 100% carbon-free electricity by 2040. The Under2 Coalition, a group of more than 220 state and local governments around the world representing 43% of the global economy, is likewise committed to keeping temperature rise well below 2C.

The climb remains very steep, however. Scientists with the UN Intergovernmental Panel on Climate Change declared last October in their landmark Special Report on Global Warming of 1.5C that humanity had to slash emissions by 45% by 2030, on the way to net-zero by 2050, to hit the 1.5C target. Failure to do so would condemn many millions of people, particularly in poor and vulnerable countries, to destitution and death and make irreversible global warming more likely. Such dramatic emissions reductions, the scientists added, would require the transformation of the global energy, agricultural, transportation and other sectors at a speed and scale without precedent in human history.

China, the other climate superpower along with the US, will therefore have to do better as well. China won plaudits in the lead-up to the Paris summit in 2015 by closing many of its coal-fired power plants. But coal burning in China has recently crept back up, and Beijing has also financed construction of coal plants in other countries, particularly in support of its massive “Belt and Road” initiative to construct ports, railways and other infrastructure across Asia to the Middle East, Africa and Europe. Alba commends China for promising to go beyond the emissions reductions it pledged in Paris, but he adds, “We are asking them to do much more and in particular to green the Belt and Road initiative. It’s quite important because of the scale of that initiative that they do not support coal plants but instead renewable energy.”

When Guterres gavels the summit’s plenary session to order next Monday, the 12-year deadline outlined by the IPCC scientists will have shrunk closer to 11. Meanwhile, the burning of the Amazon, Hurricane Dorian’s devastation of the Bahamas, this summer’s heatwaves across much of the northern hemisphere, and countless less-heralded disasters illustrate that climate disruption is no longer a worrisome future specter but a punishing current reality.

Alba nevertheless draws hope from the heightened public concern and activism against the climate threat. “Compared to 10 years ago, the level of public involvement is very different,” Alba said, “and that’s to a large extent because the news media is talking about it more and young activists are demanding action.”

In the United States, activists with the Sunrise Movement and other groups have protested against Democratic and Republican politicians alike and demanded that the government implement a Green New Deal. Championed by Representative Alexandria Ocasio-Cortez, the progressive congresswoman from New York, and modeled on the New Deal jobs and investment programs President Franklin Roosevelt implemented to pull the US out of the Great Depression in the 1930s, the Green New Deal calls for the government to kickstart the transformations of energy and other sectors the IPCC says are needed. Such a massive investment program will also, the activists say, create millions of jobs and reduce economic inequality. Central to the plan is “climate justice”, the notion that poor and non-white individuals and communities have suffered worst from climate change and therefore should get precedence for the jobs and opportunities flowing from a Green New Deal.

Activist pressure has helped make the Green New Deal the de facto position of the Democratic party in the US, while also spreading the idea overseas. Each of the leading Democratic candidates in the race to replace Trump has endorsed one version or another of a Green New Deal. Bernie Sanders proposes a particularly robust program that will, he promises, “end unemployment” by creating 20m new jobs and also help developing nations dump fossil fuels in favor of renewables.

Guterres has gone out of his way to boost the visibility of the climate youth, most notably Greta Thunberg, the Swedish teenager who is the best-known face of the climate movement. Thunberg’s “School Strike For Climate”, begun a year ago in her home town of Stockholm, spread like wildfire around the world, inspiring hundreds of thousands of students to skip classes and take to the streets to demand that governments, in Thunberg’s words, “act like the house is on fire – because it is”. Guterres has invited Thunberg to keynote a special one-day youth climate summit on 21 September and also to address world leaders at the plenary session on 23 September.

Alba recognizes that the public is sometimes skeptical of UN conferences, and he acknowledges that the UN “does not have the means to enforce” the commitments made by governments in the Paris agreement. Instead, he puts his faith, again, in the ability of public pressure to compel governments to do the right thing. “As in many other parts of international law,” he says, “the enforcement rests in the follow-up and the ‘name and shame’ role of civil society – to expose that a country is not complying with what they’ve committed to. The media plays an important role there, and so do activists.”

Meanwhile, Alba’s own teenage son has given him advice on how to make the case for action: don’t talk so much about the future that youth will inherit but rather about the climate disasters happening now. “He had a point,” says Alba. “This is an emergency we need to deal with today, not tomorrow. Talking about 2030 and 2050 is important because science gives us those dates for achieving certain objectives, but there’s the danger that it tells people that we have time to make these changes. And that is a mistake.”