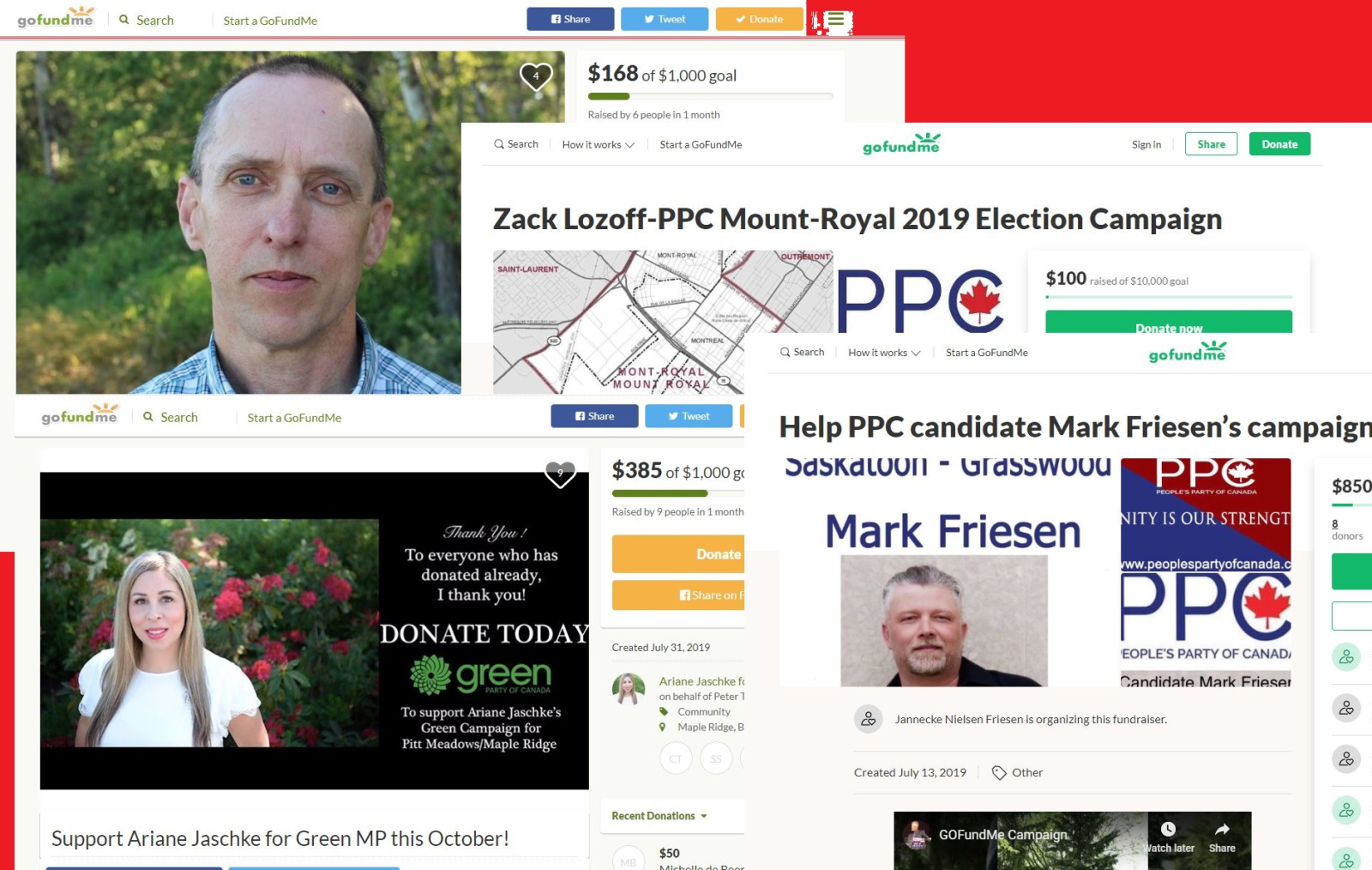 A collage of screenshots from People’s Party of Canada and Green party candidates on GoFundMe pages competing in the 2019 election. GoFundMe screenshots
Previous story
Next story

Nobody has donated to Travis Patron’s Bitcoin fund.

Patron has long billed himself as a Bitcoin expert, even writing a book on the digital currency. He is now the leader of the Canadian Nationalist Party, which was recently registered as an official party with Elections Canada. Despite that, not even a piece of a Bitcoin has come his way.

Even so, Patron and his far-right nationalist party — which promotes a variety of conspiratorial beliefs, and has appeared to organize supporters on the neo-Nazi forum Stormfront — is a clear sign of the challenges to come, thanks to the blockchain.

And he isn’t the only one leveraging new online sources of revenue to finance election campaigns.

On crowdfunding site GoFundMe, supporters are asked to kick in small donations for People’s Party of Canada candidate Mikko Paavola to prove that “we don't need to be the huge corrupt political party to bring in funds for this election.” Paavola, running in the Sudbury-area riding of Nickel Belt, has only managed to pull in $168 to date. One donor disclosed their name, the other five opted to remain anonymous.

Mark Friesen, PPC candidate in Saskatoon-Grasswood, has been a little more successful on the platform. He’s pulled in $850 from eight donors. His two biggest contributors have opted to remain anonymous.

Zack Lozoff, also running for Maxime Bernier’s party in the Quebec riding of Mount Royal, has just one $100 donation — from himself.

It’s not just the PPC. Green candidate Ariane Jaschke, in the B.C. riding of Pitt Meadows—Maple Ridge, pulled in $385.

It appears that none of these fundraisers for individual candidates have been terribly successful, but there are signs that the platform can be an effective way of fundraising cash for political ends.

Last year, Jeff Young set up a GoFundMe to, as he put it, “Turf Mark Holland,” the MP for Ajax, Ont., near Toronto. He pulled in $1,370 from 43 donors, and donated most of that money to the local Conservative candidate.

Norman Vincent Traversy started a fundraiser earlier this month to, as he puts it, get “justice for Trudeau and SNC-Lavalin.” Traversy has used an arcane section of the Criminal Code to try to lay evidence against the prime minister for, among other things, obstruction of justice.

Bitcoin and crowdfunding sites just compound the number of ways parties or actors looking to behave badly can manage their mischief, writes @Justin_Ling

The charges are undoubtedly vexatious, and will almost certainly be thrown out by a judge. That hasn’t stopped Traversy from raising more than $17,000 for the effort.

Joining him in the effort is Patrick King, a Yellow Vest organizer who has been outed for posting an array of anti-Semitic and Islamophobic tropes online, and a host of others. Promoting the effort is Kevin J. Johnston, a far-right Youtube personality who has repeatedly been cited for pushing Islamophobic sentiment. He has been charged with hate crimes for his work, and most recently lost a $2.5-million civil case over his work.

Players like these have long been sniffing around the edges of Canadian elections. But never has it been quite so easy to raise money — and to do it anonymously. It’s a clear sign of how new technology is posing challenges for Canada’s election watchdogs.

Generally speaking, anyone can contribute up to $1,600 to a registered political party or candidate per year. The donor needs to be a Canadian citizen or a permanent resident, and corporations or unions can’t kick in a dime.

All those donations are tracked by Elections Canada and reported in a central database regularly. Not abiding by the rules could lead to the donor, the party or the candidate — or all three — getting rung up on charges under the Elections Act.

Elections Canada assures compliance with the regime by requiring parties to submit audited financial statements to the regulator, breaking down their contributions and spending.

These rules get a bit murkier when it comes to registered third parties. While the federal government has brought in new rules governing how they can raise and spend money, most of those rules — which also ban foreign donations for advertising purposes — only come into force in the immediate lead-up to the election.

There are ways to skirt these rules. Parties could solicit donations in big manila envelopes of cash, or find someone willing to pay a phalanx of others and have them, in turn, make donations in their own name. Parties could convince their donors who have contributed the maximum to send their surplus cash to third parties, with whom the party is conspiring.

These things are all expressly forbidden by the Elections Act and this sort of skullduggery is often caught pretty quickly.

Bitcoin and crowdfunding sites just compound the number of ways parties or actors looking to behave badly can manage their mischief.

Elections Canada, seemingly sensing that could present a challenge, began consultations with federal parties on how to manage Bitcoin donations. In a set of guidelines, released in March, the agency put harsh limits on how cryptocurrencies could be accepted.

“Political entities should set up a two-step process to identify contributors of more than $20 and to record transaction information from the blockchain so that contributions can be audited,” they laid out.

Parties need to report the name and addresses of any individual who submits more than $200 in donations.

The beauty of bitcoin, however, is that someone can post a link to their Bitcoin wallet and anyone can contribute without disclosing their name. That’s where things get a bit complicated.

“If the political entity acquires this information after the contribution is made, the requirements would still be satisfied,” Natasha Gauthier, a spokesperson for Elections Canada told National Observer.

For any donations over $20 made truly anonymously, where the party can’t identify the contributor, “its commercial value must be remitted to Elections Canada without delay,” states the Elections Canada guidelines.

The agency did warn that they would be keeping an eye out for any irregularities. “Any unusual amounts or patterns in cryptocurrency contributions would be subject to public scrutiny and audit,” Gauthier said.

Because cryptocurrencies are considered non-monetary, they are not eligible for a tax receipt.

The Canadian Nationalist Party confirmed that it hasn’t received any Bitcoin to date. When, or if, it ever does, its leader says he intends to follow the rules.

He said the Bitcoin wallet listed on his party’s site is the only one they use. A public ledger records no donations made to that wallet at all.

The People’s Party did not respond to a request for comment about their candidates’ use of GoFundMe, although Elections Canada says such platforms are, generally, above board.

Any party thinking they can use sites like GoFundMe to skirt election laws, however, should take heed, Elections Canada warns.

“It is an offence under the Canada Elections Act to make false declarations in a financial return, to conceal the identity of a contributor or to circumvent the contribution limit,” it said, adding that suspicious activity could be investigated by the Commissioner of Canada Elections, and that can lead to charges.

While it appears that this election won’t see the kind of shady money transactions that are made possible by these online tools, it’s only a matter of time before someone tries it.