Dorian was a climate catastrophe waiting to happen 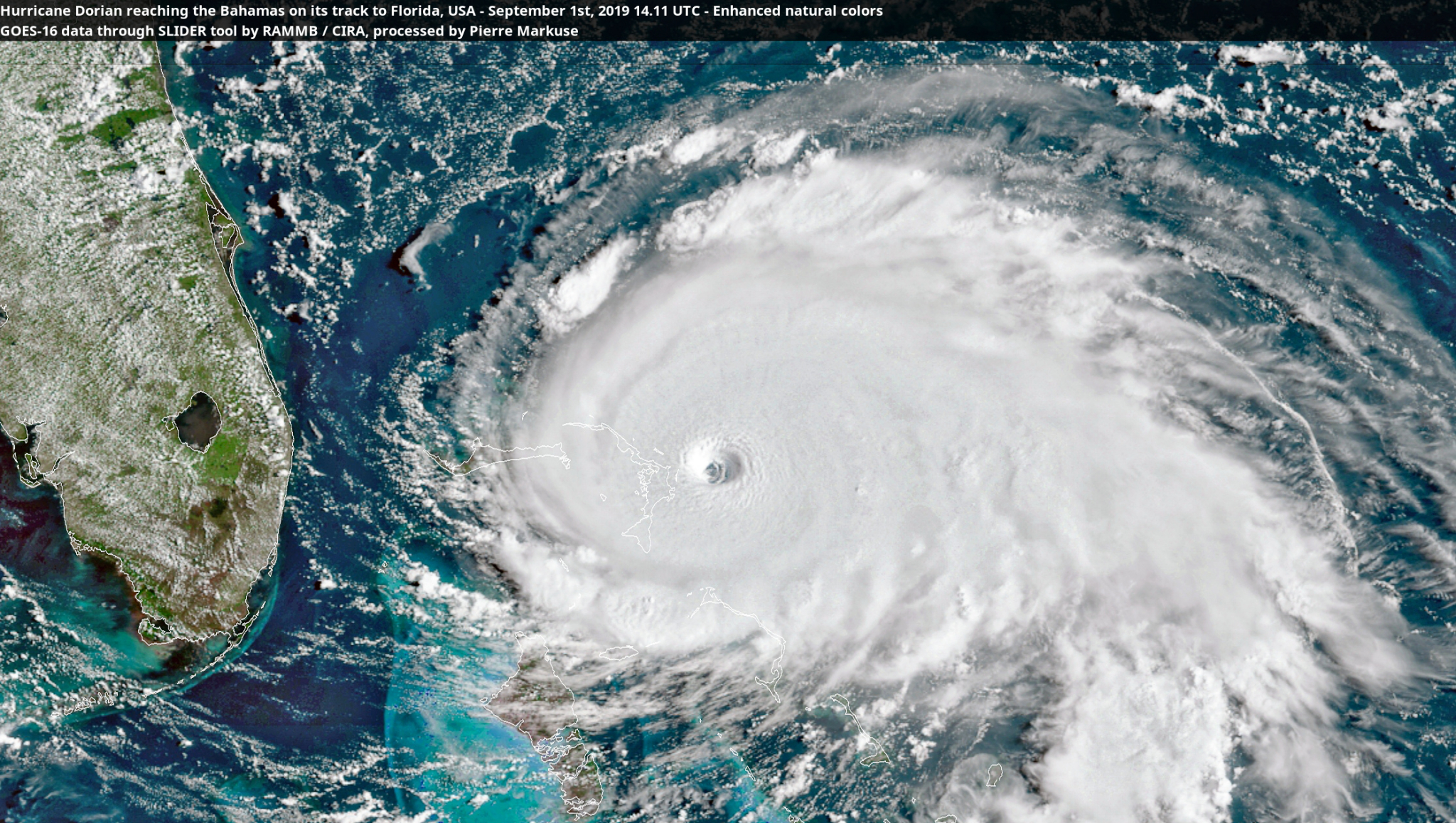 Hurricane Dorian reaching the Bahamas on its track to Florida on Sept. 1, 2019. Photo via Flickr/Pierre Markuse
Previous story
Next story

Despite the eeriness in the air, it was just like any other day.

It was Friday, Aug. 30, and we went to work as expected and left with enough time to prepare for what we’d been warned about. Though I live in Nassau, the capital of the Bahamas, which was not in hurricane Dorian's direct trajectory, I, like many other people, took all the necessary precautions.

Bahamians are very interesting people. As a Christian nation, most Bahamians are often taught to believe a God in the sky sent the storm as punishment for the nation’s sins. At the time of writing, however, many Bahamians find themselves caught between two opinions: that Dorian came to hasten us toward repentance, and that it was a manifestation of climate change.

At the mention of the word hurricane, the country's citizens scatter like little ants, trying to stock up on all their necessary items. There were grocery stores with lines out the back door, gas stations that had sold out of gas and lumber yards with not a sheet of plywood left — all because people took the precautions they thought were necessary to survive.

My family in Grand Bahama and Abaco, the two affected islands, moved inland, away from the shorelines and toward higher ground. They hunkered down and prayed the waves and winds still knew His name, but nothing at all could prepare them, or us, for the devastation to come.

As the winds picked up speed in Nassau and the rain started pouring down, we knew Dorian had made an appearance in Abaco and that the capital was getting the outer bands of the storm, with wind gusts more than 320 km/h and disastrous storm surges.

Hours later, the horrifying videos started coming in, showing cars turned upside down, roofs demolished, houses flattened, trees uprooted and families dancing with death as king tides inundated communities with water, forcing locals to find shelter elsewhere. Greta, a storm survivor in Abaco, recalled to MSNBC that during the height of the storm, 10 people swam to her front door seeking shelter, including five children, among whom were a five-month-old and a six-month-old with cerebral palsy.

On the island, when evening came, we breathed a sigh of relief as Dorian left, but we became even more afraid when we learned this monster gained speed and strength and steadied its course toward Grand Bahama. To describe Dorian as a category 5 hurricane would be an injustice done to the locals and a discredit to what they have experienced. This storm catastrophically demolished Abaco and Grand Bahama. While people prepared and prepared, while they evacuated, no one imagined Dorian would create such a cataclysmic event in the history of the Bahamas.

It has been a week since Dorian departed the Bahamas, taking more than 30 lives. Now, mothers and fathers mourn the loss of their children, husbands the loss of their wives, people left behind are still awaiting an update from family members, Grand Bahamians and Abaconians are left to pick up what may be left of their lives and start over and a nation is left to rebuild in the aftermath.

While many in the Bahamas would want to connect Dorian to some supernatural cause, it is a matter of urgency that we acknowledge the warming of the world, caused by humans, was responsible. Dorian was a climate catastrophe waiting to happen.

As other countries worry about saving money, those of us surrounded by water must be steadfastly focused on saving lives, as our communities are at a higher risk of extreme rainfalls and severe floods. We can no longer sit idly by and accept money from larger countries that have failed to do their share to reduce carbon emissions.

The Bahamas has made the commitment to ban single-use plastics and Styrofoam by 2020. But these commitments are insignificant when measured against a larger global community that refuses to take immediate action.

How many more lives must be lost and how many more economies must be pushed to the brink of destruction before the global community realizes storms like hurricanes Dorian and Matthew (2016) and tropical storm Kirk (2018) are becoming the reality for countries like the Bahamas and Barbados? How long until another historic tragedy?

Will it take the fire next time?

Shelby McPhee is an M. A. candidate in the department of politics at Acadia University and a proud Bahamian who writes at the intersections of race and gender. In 2018, he completed his bachelor’s degree in politics from Acadia University.

As if dealing with the

As if dealing with the Irvings wasn't hard enough for New Brunswick. The Atlantic region seems like it's going to be a danger zone if temperatures keep rising. I have to wonder if Toronto, Ottawa, and Montreal are a bit too close to the hurricane zone as well...

And yes, I know this article

And yes, I know this article is about storms in the Bahamas, but of course storms don't necessarily end there.

Climate activists should be

Climate activists should be very careful about linking hurricanes with climate change.
The science does not claim that climate change CAUSES hurricanes, though warmer seas and blocking patterns may magnify their severity and impacts.

"While many in the Bahamas

"While many in the Bahamas would want to connect Dorian to some supernatural cause, it is a matter of urgency that we acknowledge the warming of the world, caused by humans, was responsible." To me, the most important "takeaway" from this article. Thank you.
www.PlanetInPeril.ca