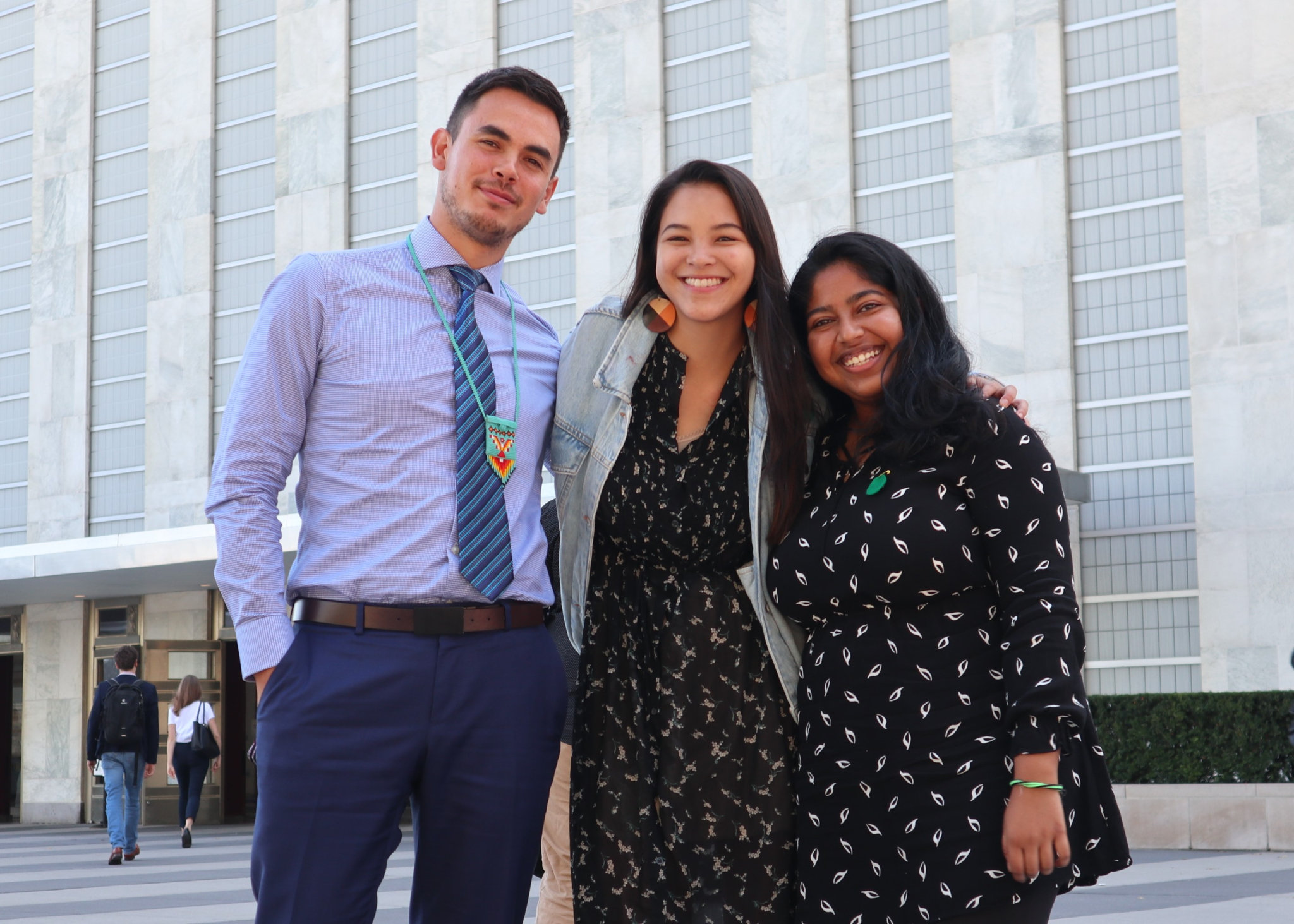 When Shakti Ramkumar was a ninth-grade student, she would attend city council regularly to push for climate action.

On Saturday, the 23-year-old communications lead at Student Energy was at the United Nations’ first-ever Youth Climate Summit, demanding action, this time with hundreds of the world’s youth alongside her.

"No single day has ever accomplished anything in history," Ramkumar said, but there is "incredible power in connecting with young people.”

A day after the largest global youth strike in modern history, Ramkumar was one of a dozen youth from Canada welcomed into the historic UN headquarters in New York to meet with Microsoft’s CEO, the UN Secretary-General, the Canadian ambassador to the United Nations and policy-makers from around the world.

Officials were given the title of "keynote listeners" to emphasize their role as providing an essential audience to the invited youth leaders — who represent a growing tsunami of young people across the world demanding climate action for a future they see slipping away.

On Saturday, youth had a seat at the highest level of global negotiations — and many did seize the moment.

Lauren and Kaitlin Grierson, for example, are 15-year-old twin sisters from Toronto who went to the summit with a call to action for global leaders to plant a global forest of 1000 trees for every young person aged 15 to 24.

There are 1.2 billion youth in that age bracket. If leaders heeded the Grierson twins’ call, over one trillion trees would be planted.

“Considering all of the different people that are here, everyone can do their own part,” Lauren said in an interview in the UN courtyard. “And then working together, we can definitely come out of this with some really great change.”

As quickly as they were inspired at the UN's first #YouthClimateSummit, many young people were also frustrated and questioned whether meaningful change can come from a summit with ‘a lot of photo ops and showy stuff," @fatimabsyed reports

Ramkumar, a recent University of British Columbia graduate, was running hackathons to reduce the barriers stopping young people from participating in decision-making in the energy sector. Her organization helped organize a dialogue between youth, CEOs and government officials.

"We all have imposter syndrome. This place," she gestured to the building's big glass windows, walls adorned with the faces of renowned world leaders and various statues gifted by countries, "is very intimidating."

But as quickly as they were inspired, many young people were also frustrated. They came to New York looking for action, but didn't find it.

'This building isn't the frontline of climate action'

Emma Lim, 18, a science student at McGill University and creator of the #NoFutureNoChildren movement, said it was inspiring to collaborate in conversations and solutions with young people from around the world, but she felt frustrated at the glaring void of action at the summit.

"There are all these events that we're meant to go sit in, but at the end of the day that's not what matters," she told National Observer outside the conference rooms at the UN headquarters.

"It's hard to sit still and listen to people talk about urgent solutions while nothing is being solved."

Larissa Parker, 25, a law student at McGill University who works with the Youth Climate Lab, was disappointed the summit did not facilitate nuanced conversations — such as the one she summarized in an essay for The Economist, where she makes a case for climate litigation to establish accountability between generations:

“Although it is simply one path of many that will be required to achieve climate justice, enshrining the rights of future generations to a healthy Earth could have lasting impacts on judicial and policy decisions for decades to come,” she wrote.

Parker said organizers didn’t plan for enough space at several Youth Climate Summit events and youth were shut out of the actual UN Climate Summit. That felt exclusionary, and countered the point of the conference, she said. "What is the point of having all of us here if we can't contribute meaningfully at every stage of these conversations?" she asked.

Braden Etzerza, 27, from the Metlakatla First Nation, had three stopovers on his journey to New York from Prince Rupert, B.C. He described the Youth Climate Summit as "a lot of photo ops and showy stuff."

"This building isn't the frontline of climate action," Etzerza, also a Student Energy delegate, told National Observer in an interview. He said he felt ​​​"out of place" at the summit, "like these spaces aren't meant for (Indigenous people)." Even the massive global climate strike this weekend led by Greta Thunberg, the Swedish environmental activist, wasn't true action, he said.

"It's the Indigenous people putting their lives at risk every day to protect our lands and our waters. We literally need to be directly disrupting these massive projects," he argued. "Our livelihoods are at risk every day from a spill, yet I'm here, emitting more greenhouse gases to get here, and wondering what we're doing."

Yet he knew that, despite this feeling, his presence as one of the few Indigenous young people was "remarkable."

"I feel guilty sometimes being in these spaces, because they're so colonial and it just feels like a front to me," he said, noting that the conversations were what was important to change the rhetoric and public opinion.

"Sometimes it feels like I don't know what we're accomplishing," he said.

Ramkumar said she is inspired more by community spaces. "I think the role of us being here — of me being here — is like to act as a bridge,” she said. "A lot of power is held here. And I don't think it should stay that way forever...If we can somehow help to democratize power just by being here, and by just not fitting into what usually happens in big decision-making institutions, then I think that's the role we'll play in this intermediate stage — we'll be bridge-builders."

‘This is a burden I chose’

Secretary-General António Guterres admitted in his opening remarks at the summit that he had been pushing for climate action for a long time and had been struggling himself.

Lim called it the most powerful and symbolic moment of the summit. “It’s very upsetting to hear someone so important at the highest level of climate action saying they are having problems tackling the crisis,” she said.

Lim noted that she was doing this work on top of getting a full-time education and job and not getting paid enough for all the travel she does for climate advocacy. "I am sacrificing a massive part of my life to do this, because I care so much, but nobody else is," she said, breaking into tears. "This is a burden I chose because I can't live with myself knowing I didn't do anything. But the adults, they're not standing with us."

A group of American youth interrupted a conversation with CEOs with a song they wrote. Everyone joined in, though they didn't know the words at first.

"Truly, when you walk into this building, you're looking for partners," Ramkumar said. "I'm not here to hear any celebrities."

Across the globe, young people call for action to save their world

What is being done to hold

What is being done to hold multinational corporations to account by adding ecological destruction or damage to a list of crimes against humanity that now includes the destruction of Culturally Historic Sites as well as Genocide?