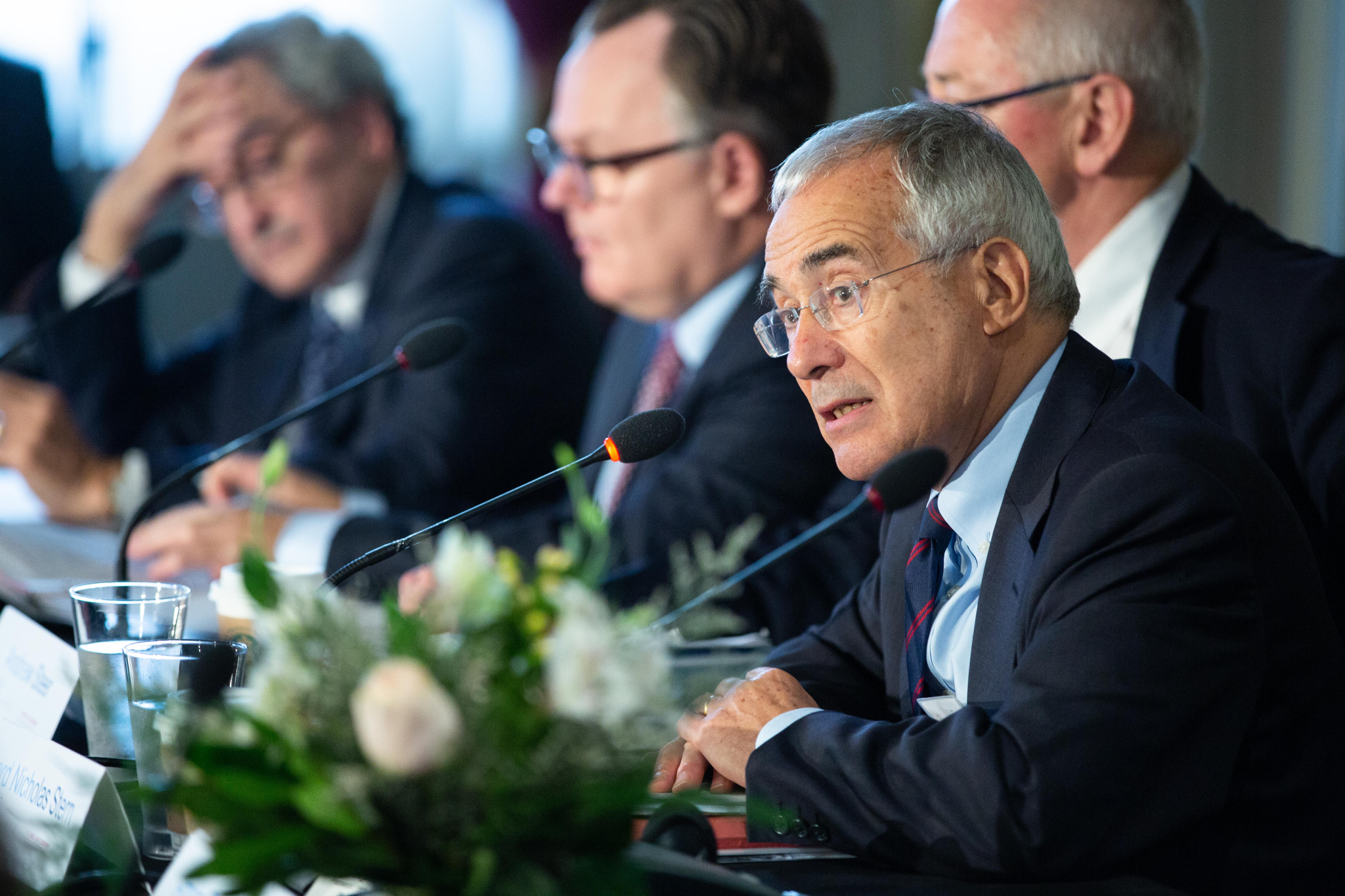 File photo of Nicholas Stern, chair of the Grantham Research Institute on Climate Change and the Environment at the London School of Economics, in Halifax on Sept. 18, 2018. Photo by Alex Tétreault
Previous story
Next story

Pricing pollution doesn’t kill growth or scare away business, the World Bank has concluded in a new report.

An environmental commission formed by the global financial body gathered evidence from economies representing 57 carbon pricing initiatives worldwide. Its Sept. 21 report concludes that putting a price on pollution does not curtail industrial growth or prompt polluters to move to countries that do not charge such a price.

“Carbon price levels have generally been moderate and existing programs include protection for at-risk sectors,” states the report, written by the High-level Commission on Carbon Pricing and Competitiveness.

“Tax rates, labor availability, and infrastructure may be more significant to investment decisions regarding location of production than environmental regulations."

The report was released two days before the 2019 UN Global Climate Summit, where Secretary-General Antonio Guterres has made four specific requests of all nations, one of which includes taxing carbon.

The study by the group of business leaders, public sector leaders and academia was convened by the Carbon Pricing Leadership Coalition, a public-private partnership with civil society created by the World Bank.

It looked at economies representing about 20 per cent of global emissions, or 11 gigatons of carbon dioxide, and found carbon pricing was the “most flexible” and least-costly solution for cutting pollution, compared with other government approaches such as “requiring specific technologies” or “dictating when emissions need to be reduced.”

A debate over the relative merits of these approaches is currently playing out on the campaign trail in Canada.

The Trudeau Liberals are defending their nationwide carbon pricing regime, put in place April 1, while the Opposition Conservatives propose to instead rely on technological solutions — their platform calls for requiring polluters to invest in clean technology.

The report cites British Columbia as an example, noting that after the province introduced a carbon tax, a new clean tech sector emerged eventually growing to over 200 companies and generating $1.7 billion annually.

“The investment opportunities that arise from decarbonization are considerable, as is the potential for the development of new industries and innovation within existing ones," says a new World Bank report

Similar findings were found in Sweden, the report said, which saw GDP increase by 75 per cent and emissions decrease by 26 per cent after the implementation of a carbon price.

British Columbia Environment Minister George Heyman told National Observer in New York where the report was released, that the findings were “very, very aligned with the approach we're taking” in his province.

He said B.C.’s carbon price was within the report’s recommended range and noted that it advocated for “a suite of other measures” that he said B.C. was trying to enact as well, such as green rebates and a “climate solutions council,” as well as zero-emissions vehicles and sustainable building codes.

“Companies understand that if they operate by internalizing the price of the pollution that their industries or businesses create, they'll be driven to reduce that pollution,” he said. “They’ll get a head start, go increase their competitiveness, and they'll be ready for change instead of reacting when it's too late.”

Asked how effectively emissions are declining under B.C.’s carbon price, Heyman said it was too soon to tell because “it’s new.”

“I don't expect to see a massive reduction in emissions in the first couple of years. It takes a while to implement things,” he said. “It will take time but we will ensure we report annually on...our targets.”

Nicholas Stern, an eminent London economist who helped author the report, said at the launch that carbon pricing “is the story of the 21st century.”

Stern told the New York audience that the use of carbon pricing needed to be “broadened” around the world and that saving the planet is not “a burden.”

According to the report, 46 national and 28 subnational jurisdictions have carbon pricing systems in place covering over 20 per cent of annual greenhouse gas emissions. These include Europe, Canada, California and Washington state, Mexico, Peru, Colombia, Chile, China and Singapore.

Leaders around the world need to enact policies to incentivize the reduction of emissions by implementing long-term, stable carbon pricing policies, the report said. If done right, both the loss in competitiveness and the threat of carbon-leakage can be prevented.

It found that “a notable positive outcome of carbon pricing is that it can generate significant funds that can be used to pay for transition-assistance programs” like technology investment and worker transition.

“There is little evidence to date that carbon pricing has resulted in the relocation of the production of goods and services or investment in these products to other countries,” it reads.

“The investment opportunities that arise from decarbonization are considerable, as is the potential for the development of new industries and innovation within existing ones.”